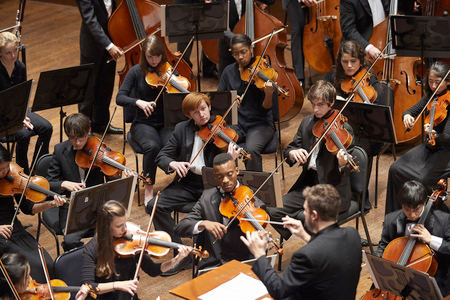 Like youth in all its exuberance, fountains make a powerful ascent until the water reaches its highest point. Then, like growing old, it begins to fall back down into the pool. In his new work, composer Roger Briggs uses this metaphor as the inspiration for his eighteen-minute tone poem. On Friday, November 18 at 8:00 pm at Severance Hall, the Cleveland Orchestra Youth Orchestra (COYO) under the direction of Brett Mitchell will present the world premiere of Briggs’ Fountain of Youth, commissioned by COYO. The program will also include Bruckner’s Symphony No. 4 (“Romantic”).

A third-year member of COYO, Daniel Fields is a senior at Heights High and has been named a 2017-18 AP Scholar. He studies privately with first associate concertmaster of the Cleveland Orchestra, Peter Otto.

A resident of Elyria, James Hettinga is in his fourth year as a member of COYO. He is a student in the Cleveland Institute of Music’s Young Artist Program, where he studies with Melissa Kraut. In 2015 he was awarded First Place in the Cleveland Cello Society Competition Senior Division.

I began our recent telephone conversations by asking Fields and Hettinga if they have found Fountain of Youth to be difficult to learn.

Daniel Fields: Contemporary music is often difficult, and there’s a lot of tricky individual passagework in this piece. But we all want to show the audience what a fantastic piece it is.

James Hettinga: At first it was difficult, but that’s because we hadn’t practiced it enough individually, especially the trickier rhythmic passages. But now those passages are fun to play. One thing that has helped the cello section get everything together is the coachings we’ve had with Richard Weiss. He helped us figure out fingerings and solve many problems.

Mike Telin: How much prior experience have you had performing newly composed works?

DF: I attended Interlochen Arts Camp this past summer, and I had a lot of friends who were composition majors. Some of them wrote pieces for me that I performed on their recitals. I thought it was really interesting to see what they have to go through in order to create a piece of music. And then it’s hard for composers to get those works performed, so getting to premiere the Briggs is a huge honor for us.

JH: Every year Brett Mitchell programs contemporary works, and at the first rehearsal we always put on our seatbelts because we don’t know what’s going to happen. We normally come out of that rehearsal not liking the piece, and that’s kind of how it was with the Briggs as well. But each week it gets better, and the better it gets, the more we like it. Having the opportunity to do this in COYO is really awesome.

MT: The Fountain of Youth is a narrative about the cycle of life. Do you hear those transitions in the piece?

DF: Absolutely. The piece comes to life from the very beginning, and ends very ethereal, soft, almost as if life itself is leaving the concert hall. I think that’s really interesting, because it shows how people approach life — at the beginning anything is possible, but in the end, we realize that we are only on earth for a certain amount of time.

JH: At first I didn’t think about the narrative, but now I would say yes, you do hear that in the piece.

MT: Do you plan to pursue music as a career?

DF: I hope to continue to play through undergraduate school, but my ultimate goal is to go into artistic administration. I’m actually doing some volunteer work in the Cleveland Orchestra Operations office. I’m the little grunt of the office, but it’s a lot of fun because there is so much that goes on behind the scenes.

Jackson began the program with a recitation of Langston Hughes’ poem “Helen Keller” — the first of five poems by Hughes that served as interludes between each piece on the first half. END_OF_DOCUMENT_TOKEN_TO_BE_REPLACED

Pianos with pins and tape on strings, a bass drum and tam tam, crotales, Almglocken, and vibes. Microphones were hooked up all around the instruments. The feed was sent to speakers around the room. Lighting designer Nicholas Houfek hung incandescent globes over the arrangement of instruments from thin black wires stretching across the beams. END_OF_DOCUMENT_TOKEN_TO_BE_REPLACED

From the podium, Elim Chan set an ambitious tone for the evening. The rising star conductor, here in her Cleveland Orchestra debut, has a commanding style, and every twist and turn in Saturday’s performance tracked closely with her baton. END_OF_DOCUMENT_TOKEN_TO_BE_REPLACED