Episode 7 of The Cleveland Orchestra’s pre-recorded In Focus series is the shortest so far, clocking in at only 37 minutes. But the emotional impact of Dmitri Shostakovich’s bleak Chamber Symphony in c followed by the calm, shimmering hopefulness of Olivier Messiaen’s Le Christ, lumière du Paradis (from Éclairs sur l’Au-Delà) is out of all proportion to the length of the music.

The Shostakovich is an arrangement by Rudolf Barshai for string orchestra of the composer’s String Quartet No. 8, a work directly inspired by the firebombing of Dresden, an attack toward the end of World War II that claimed more victims than Hiroshima. Premiered in 1960, the quartet has also been seen as the composer’s personal epitaph, although the Soviet authorities had it dedicated “to the victims of fascism and the war.”

The Messiaen is the final movement of the composer’s last composition, commissioned by the New York Philharmonic, and premiered in 1992, half a year after Messiaen’s death. The title of the whole, eleven-movement work translates as “Lightning over the Beyond,” the movement itself as “Christ, the light of Paradise.”

Franz Welser-Möst noted in his introductory remarks that this program marked the anniversary of the arrival of the pandemic, and that the hopeful, transcendent nature of the Messiaen offered a response to the despair of the Shostakovich. 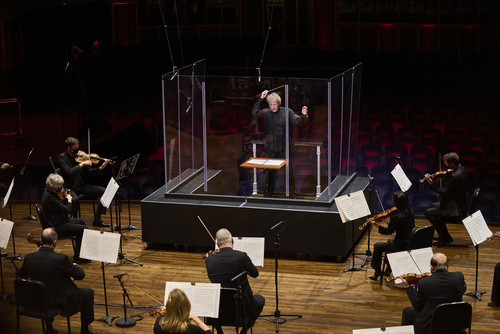 The full string sections of the orchestra were spread out strategically over the Severance Hall stage for the Shostakovich. An elaborate enclosure around the podium allowed Welser-Möst to unmask himself and transmit more subtle facial cues to the players (no doubt this Plexiglass structure will become a fixture of the new normal when live audiences are welcomed again).

Although the quartet version of the Shostakovich can achieve a fearsome intensity, the sheer weight of the string tone in this performance is so glorious and resonant that it nearly but not entirely masks the elemental sadness of Shostakovich’s music. The opening movement with its stern, grey counterpoint gives way to the rollicking rhythms of Shostakovich’s “Jewish theme,” followed by a frenzy of fiddles and a mawkish waltz rondo. Lovely solos by violinist Peter Otto and cellist Richard Weiss float above the last movement’s fugal elegy.

The string sections shed the double basses and most of the cellos as a sudden shift of timbres created Messiaen’s feeling of timelessness stretching into eternity. Three triangles trilled almost imperceptibly under the long, complex chords. 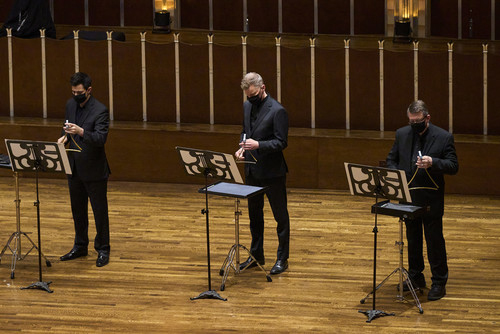 This was an evocative program, sensitively chosen and skillfully performed. Messiaen’s music may not represent everybody’s vision of hope after despair, but it did the job on this occasion.

For its latest In Focus episode, “Visions and Impressions,” The Cleveland Orchestra makes a gesture in the direction of welcoming winds back into the action, although principal flute Joshua Smith’s contribution to the event comes in the form of two unaccompanied pieces that leave him looking very lonely on the Severance Hall stage. END_OF_DOCUMENT_TOKEN_TO_BE_REPLACED

LD’s artistic director Debra Nagy introduces the hour-long program with a discourse on the importance of the garden and its centerpiece, the fountain, for artists and musicians of the 14th century. Later in the program, Blue Heron artistic director Scott Metcalfe expands on the subject by exploring the Trinitarian metaphor behind that bubbling source of water in the Medieval mind. END_OF_DOCUMENT_TOKEN_TO_BE_REPLACED

END_OF_DOCUMENT_TOKEN_TO_BE_REPLACED

The latest program, which visits the ghetto and palace at Mantua and the ghetto and church at Venice, uses expressive instrumental music by Salamone Rossi, Giuseppe Sammartini, Antonio Vivaldi, and Alessandro Marcello, two of Benedetto Marcello’s 50 psalm settings, and Hebrew prayers and songs associated with Passover and Purim to evoke the rich cultural life of those towns. END_OF_DOCUMENT_TOKEN_TO_BE_REPLACED