“Among everything else, the fact that he can write music as diverse as Schindler’s List and Home Alone — and everything in between — is just incredible. Whether it’s adventure or comedy, or JFK, or Born on the Fourth of July, there’s just a gamut of emotions. Probably the only non-movie piece I’ve ever conducted of his was his Tuba Concerto.”

On Saturday evening, January 30 at 8:00 pm in Severance Hall, Topilow will fill the stage with musicians for an entire concert devoted to the music of John Williams. “We wanted to do something a bit unusual — not just Star Wars and Indiana Jones — so we have invited five guests. Clarinetist Frank Cohen will be playing Terminal plus the theme from Schindler’s List, saxophonist Howie Smith is playing “Escapades” from Catch Me If You Can, which he did with us several years ago, and violinist Steve Greenman is playing Williams’ adaptations for the movie version of Fiddler on the Roof. And then we have the Cleveland Orchestra Youth Chorus singing two of my absolute favorite choral pieces, from Empire of the Sun and Amistad, and we have the Contemporary Youth Orchestra kids sitting in on two pieces, Patriot and Indiana Jones March. There are going to be a lot of people onstage. And then I’ll play Cantina at the end. And we have Stars Wars reenacters too — how could I forget that! And we’re playing two pieces from the new Indiana Jones movie, which is just coming out.”

That recitation left Topilow a bit breathless with excitement. He wasn’t through yet, though. “And we’re doing ‘Devil’s Dance’ from Witches of Eastwick, which just came out, and Jaws and Olympic Fanfare 1988, which is my favorite. There’s going to be a lot of action.” 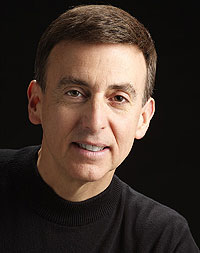 How does Carl Topilow plan to pull all of that together? “That’s my job, making sure everything gets rehearsed thoroughly. And things keep evolving. We took out the Imperial March and put in the two new pieces, both of which need to be rehearsed. We could play the Imperial March in our sleep. It’ll definitely be a challenge — musically, logistically, and just getting everything ready.”

Topilow is wired about this nearly-sold out concert. “I’m very excited to be playing this spectacular music. Think about what John Williams has done for music in general, plus what he’s added to the movies — he’s brought the symphony orchestra into a new golden era. You had the era of Korngold, Waxman, Rózsa, and all those composers from the late ‘30s to the ‘50s. There were others in between them and Williams, but since then he’s at the top level of all the composers who have taken up their mantle brilliantly. Star Wars did so much to make the symphony orchestra part of the film experience.”

Does Carl Topilow think that the rise in the popularity of film music has raised all the boats for symphony orchestras? “It can’t hurt! I personally think that orchestras should incorporate film music on their so-called ‘Masterworks’ series rather than just relegating them to ‘Movie Night.’ After all, Vaughan Williams, Walton, Copland, and Prokofiev all wrote music for films in their day.”

END_OF_DOCUMENT_TOKEN_TO_BE_REPLACED

Franz Welser-Möst led the final bows on Saturday night at Severance, like the star of any show should. The Cleveland Orchestra’s music director is in his element presiding over the ensemble’s annual opera production, which this season packs the drama. Verdi’s Otello — in a concert staging that opened May 21 and runs for two more performances (May 26 and 29) — demands big voices, instrumental forces to match, and a conductor who can give it all shape and direction. END_OF_DOCUMENT_TOKEN_TO_BE_REPLACED

The cimbalom was the feature of the show, an instrument capable of taking on many personas. Its performer, Chester Englander, has shaped his career around the instrument, and has inspired composers to write more repertoire for it, some of which was presented on the program. END_OF_DOCUMENT_TOKEN_TO_BE_REPLACED