After weeks of watching online streams of archived concerts and ad hoc performances from quarantined musicians’ living rooms and bedrooms, it was thrilling to be able to advertise, preview, and report on two real-time webcasts last Friday and Saturday that embraced high production values and addressed the persistent issue of how to compensate musicians for online services. Saturday afternoon’s joint recital by Colin Davin and Jason Vieaux was sponsored by the Cleveland International Classical Guitar Festival, whose 2020 iteration, scheduled for that weekend at the Cleveland Institute of Music, vanished in the wake of the pandemic.

As something of a consolation prize for the audience and to offer support to cancelled artists, Artistic Director Armin Kelly arranged for the two festival regulars to play solo sets and combine forces for a special encore duet in the demo room of his Guitars International. If you can’t perform in Mixon Hall, the next best thing is a room with a good acoustic and a window giving a similar if more limited view of the natural world outside.

This event was ticketed at $10 a pop, with access via a private YouTube channel. By concert time, around a hundred viewers had logged on from Hawaii, Florida, Wisconsin, Bulgaria, and other destinations near and far, and it was fun to keep an eye on the running comments on the right-hand side of the screen. The intimacy of the venue and the close-up images of the performers made the experience special. 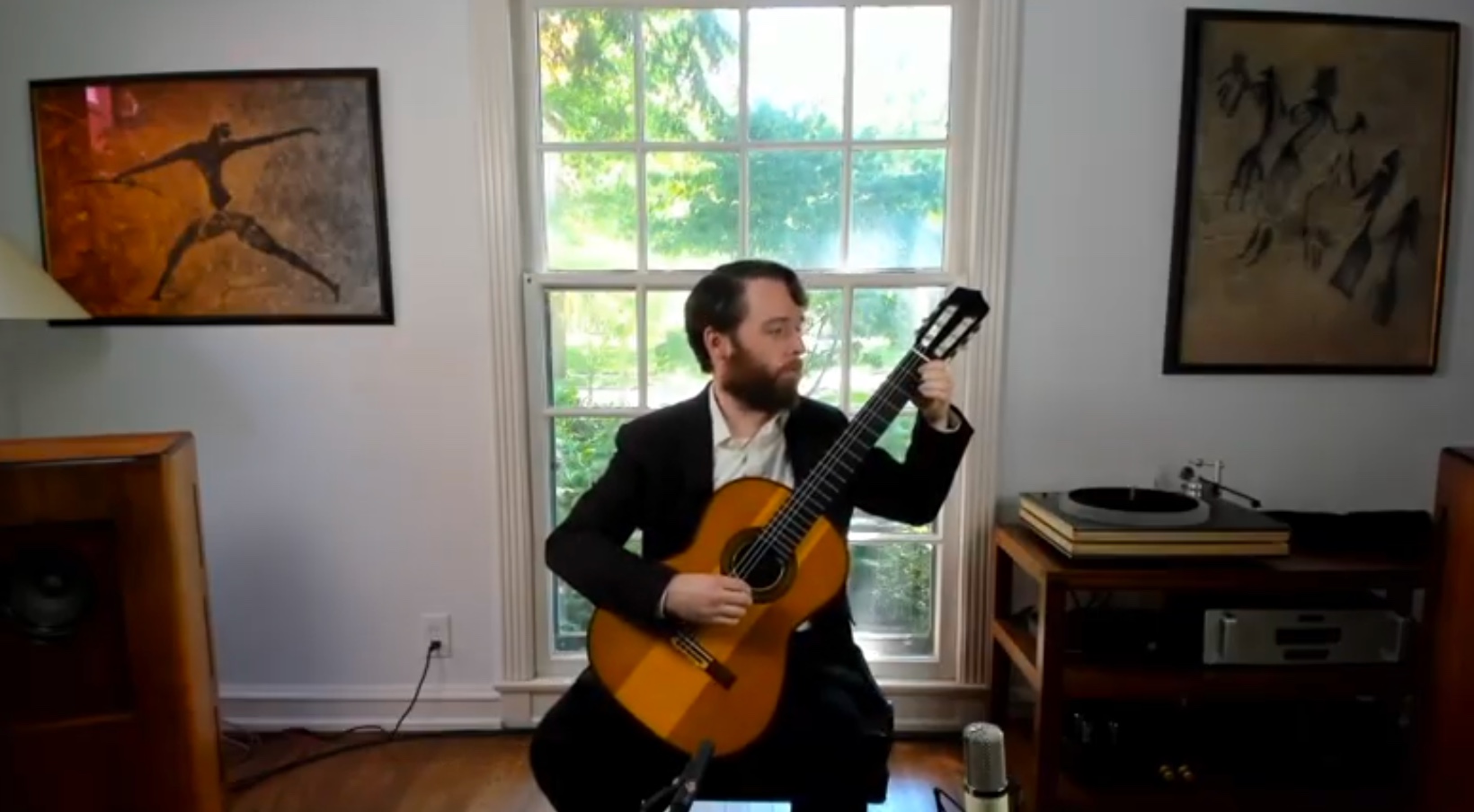 Most importantly, the sound was excellent. Davin had invested in a sensitive microphone that gave a fine impression of his opening piece, an arrangement of Pedro Elías Gutiérrez’s sunny and rhythmical Alma Llanera, which the guitarist described as “the unofficial national anthem of Venezuela.”

By the middle of Leo Brouwer’s impressionistic El Decameron Negro, the audience had swelled to 148. Slow arpeggios, gentle 7th chords, and lacy filigree all came across vividly, as did the jazzy and improvisational Brasiliana No. 13 by Radamés Gnattali.

Agustín Barrios Mangoré’s Julia Florida was lovely and expressive. Davin ended his set with the brilliant Southern Hemisphere rhythms of Fernando Bustamante’s Misionera in the arrangement by Jorge Morel. Although you heard the sound of no hands clapping, the online fans were extravagant with emojis. A suggestion in the comments window read, “One way to amplify the applause would be to use the donate button.” 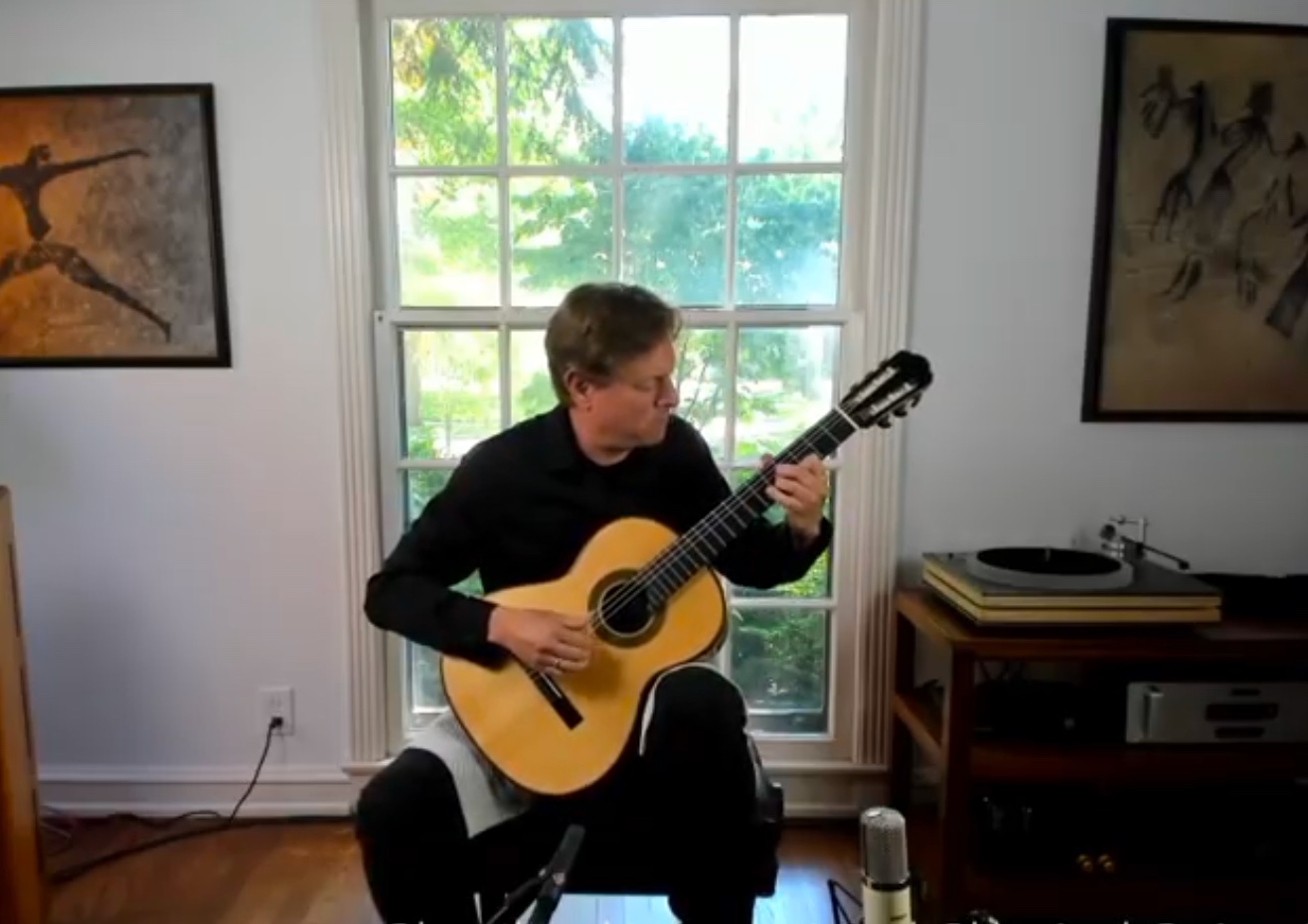 A brief intermission suddenly ended when Jason Vieaux popped onto the screen and launched into a clear, rhythmic, and well-controlled account of Morel’s Danza Brasilera.

Vieaux’s assured technique was in evidence in Isaac Albéniz’s Cuba, which inspired a viewer to write, “Wonderful vibrato. You can’t see his hands moving.” Vieaux took a moment to tune two strings down for his own Home, a lovely, nuanced song.

The comments column heated up during Vieaux’s perfectly paced, detailed playing of Manuel Ponce’s Sonatina Meridional. “Nice étouffee.” “He’s so cool he looks like he doesn’t even sweat.” “Rest assured, we are all clapping, Jason!”

Vieaux turned in a rich, dark performance of Andrés Segovia’s Estudio Sin Luz, written when the guitarist was losing his eyesight, before ending with a second work of his own, the gently syncopated Prayer.

As viewers piled on more emojis — the digital equivalent of floral bouquets —  Davin and Vieaux dropped out of sight to don face masks for a duet they had rehearsed on Vieaux’s front porch. Brouwer’s arrangement of The Beatles’ Fool on the Hill made for a fine encore, after which the two guitarists stayed on to field viewers’ questions.

Was this online substitute for a pair of live performances a success? The number of viewers peaked around 160 — a good turnout in Mixon Hall, which seats 235. And there was no arguing with the comments the event inspired:

“I’ve gotta say this is one of the better produced livestreams: good video, sound, and (most importantly) fantastic players!”

“Thank you CICGF! Front row seats for everyone in a packed house and no parking problems!”

“I hope you guys made six figures on this concert! You deserve it!”