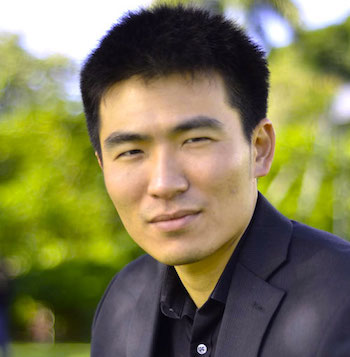 Every composer has their own way of approaching their craft. “When I write a piece, whether it’s for orchestra or chamber ensemble, I want everybody to have a moment in the spotlight,” Sebastian Chang said during a telephone conversation. “Most of the time that works out great and results in something that is fun to play. But when Alex asked me to write a timpani part, that pretty much changed everything.”

Chang, who serves as pianist and resident composer for the Louisville Orchestra, began writing CIF with a mission to correct an injustice that orchestral timpanists often experience. “They usually rest for 300 bars, then play a single note just to punctuate a big moment. They don’t get a lot of time in the spotlight and I wanted to fix that with this composition.”

But as he began writing the eight-minute work, Chang said he noticed that something strange was happening. “The timpani got greedy. It said, ‘I’m going to take over.’” The composer also noticed that the violin and clarinet parts were acting bizarrely. “They resented the timpani’s ambition and started firing back. That’s never happened to me before, but I ended up grabbing everybody and pulling them in line. The piano helped because it was neutral like Switzerland — it got along with the timpani and the violin and clarinet. So, I chopped the piece up and made it behave, which gives it an aggressive, dark quality. That wasn’t my original intention but that’s what happens with composition.”

When asked to explain how he arrived at the work’s title, Cryptogenic Infrastructure Fantasy, Chang said, “You can refer to it as CIF if you want, but ‘cryptogenic’ is usually a disease of unknown or obscure origin, and ‘infrastructure fantasy’ because the structure is loose. So that’s what the title means — it’s of unknown origin and fires from the hip.”

The composer said that he is honored to write the first work that his good friend Roman Rabinovich will play with all the members of his new family (the pianist is married to Diana Cohen). “Roman and I were both students at the Curtis Institute. We hung out every day and would watch billions of films. He introduced me to Andrei Tarkovsky, who I’m a huge fan of. About a year ago he contacted me out of the blue and said, ‘Hey, I have a new family, write us a piece.’”

Chang’s Classical Symphony, which was premiered by the Louisville Orchestra in January of 2015, is the subject of Episode 9 of the PBS web miniseries Music Makes a City. His Grand Passacaglia Fanfare, written for Yo-Yo Ma’s birthday and the Orchestra’s annual Gala, premiered in 2016, and in 2017 he curated a new score for the film Battleship Potemkin.

“It’s been an eye-opening experience working with that orchestra to see what they go through during a season,” Chang said. “They’re not just playing Beethoven. Last season we premiered a 100-minute oratorio by our music director Teddy Abrams. It’s based on the life of Muhammad Ali and included video projection and ballet. It also pulled in this year’s MacArthur Award winner Rhiannon Giddens as one of the soloists.”

In February of this year, the Orchestra premiered Chang’s Between Heaven and Earth, a work for orchestra and chorus based on the paintings of Iraqi artist Vian Sora. “I wrote all of the words, which was a big learning experience for me. There’s something new every week and I’m so grateful for the opportunity.”

Born and raised in Orange County, California, Chang made his international debut at the age of nine performing the solo part of his own Concertino for Piano and Orchestra with the Tokyo Symphony Orchestra. He has won three BMI Student Composer Awards — the youngest ever to do so — and five ASCAP Morton Gould Young Composer Awards.

What led him to the field of composition?

“When I was born my dad bought my mom a piano — she had never had the chance to learn when she was younger. She still doesn’t know how to play, so that didn’t work for her, but it worked for me.”

Chang started experimenting with the instrument when he was fifteen months old, and between the ages of two and three-and-a-half he began matching pitches on the piano with those he heard in songs on the radio. “My mom and dad thought I needed to have music lessons, but no one would accept me — they thought that before you were four, you were not able of comprehending anything.”

After a teacher rejected him because he couldn’t read music, his parents found a school that would accept him as a student. “At the age of four the only institution that would take me was the Irvine Yamaha Music Center. They place an emphasis not only on learning piano but also on ear training and composition. That’s how I started composing — it was luck.”

Chang said that when he was very young, he was exposed to a lot of classical music. “That is what my teachers told me to listen to. But my mom and dad listened to oldies like Motown and R&B on the radio when driving around. I was introduced to rock in middle school — Southern California is an epicenter for punk and metal, so I got into those scenes as well. After Curtis, when I moved back to California, I started getting pop gigs, so I learned how to improvise on the popular songs that every cover band would play. I have hundreds of charts that have been hastily prepared.”

Although he doesn’t take issue with today’s trend of combining the classical and popular music genres, Chang feels those attempts don’t often result in a meaningful artistic experience. “The problem is that they can’t just be thrown together,” he said. “Pop music is strong because it knows what it is and never deviates from its core principles. Classical music is strong because of its tradition and because it doesn’t deviate from its core principles. If these two worlds are going to come together, there needs to be an integration of the deepest principles of both. And it needs to be done in a way that lets everybody draw upon their own traditions. If that happens, the product will be incredible — I’m still waiting for someone to do it.”

END_OF_DOCUMENT_TOKEN_TO_BE_REPLACED

Supported by engagingly, yet simple staging by Cara Consilvio, a well-prepared cast of singers told the archetypal story of Cinderella with charm and flair. Framing the production was  a sparse but colorful set and wonderful lighting by Dave Brooks. END_OF_DOCUMENT_TOKEN_TO_BE_REPLACED