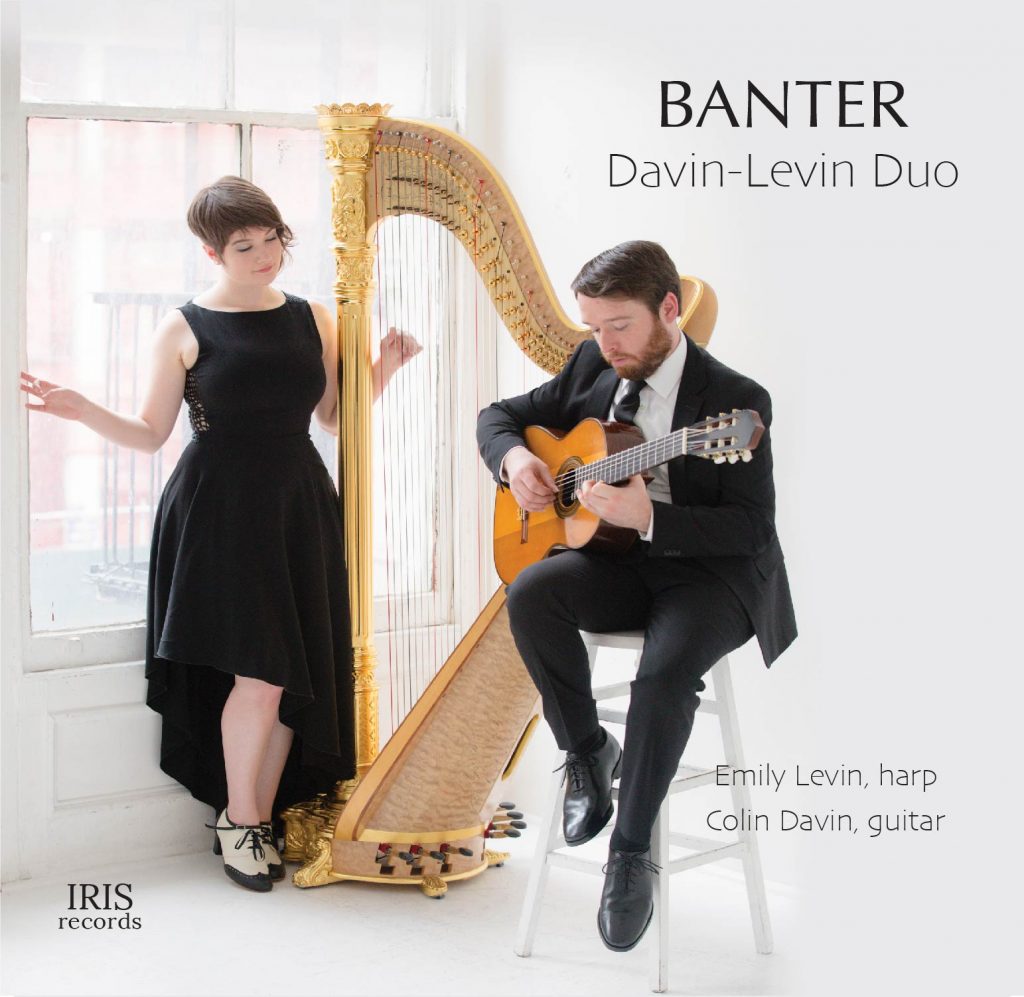 Aware of the limited repertoire that exists for their combination of instruments, guitarist Colin Davin and harpist Emily Levin got creative. The debut album from the Davin-Levin Duo, Banter, released on April 7 on Iris Records, includes their own arrangements of music by Ravel, de Falla, and Glass, as well as commissioned works by Will Stackpole and Dylan Mattingly.

Philip Glass’s Etude No. 6 for piano provides a good introduction to the timbre of this duo. The guitar generally has a more articulate sound, the harp a more delicate one. But both instruments fall on the subtle side of the spectrum, a perfect match for the mesmerizing aura of minimalism.

The spirit that Davin and Levin bring to Glass is immediately apparent, whether in the vigorous fortes or the opening piano that quivers with energy. No matter the rhythmic task, expert coordination is a constant. One speed bump in the arrangement is a swift scale of triplets that comes across a little uneven in the harp.

Ravel’s Ma Mère l’Oye (“Mother Goose”) is a beautiful arrangement of the original version for piano four hands. It harnesses the harp’s orchestral range, from deeply low to twinklingly high, as well as its catalog of special effects. To choose a couple of highlights, the bell sounds in the “Laideronnette, Impératrice des Pagodes” ring out with a fascinating hum from the two combined instruments. And the gorgeous “Les entretiens de la Belle et de la Bête” receives riveting pacing and subtle rubato from the Duo in a masterful performance.

At the center of the album are the two commissions, both receiving their premiere recordings. Will Stackpole creates a unique sound world in Banter, Bicker, Breathe, with a constant sense of motion and an expressive use of microtones. A feeling of anxiety dominates for perhaps a bit too long until the delicate mystery of the final third. There, just a hint of uneasiness remains as if in a rearview mirror.

If the Stackpole work is restless, then Dylan Mattingly’s La Vita Nuova (and other consequences of Spring) is glacial in its progress. Each section slowly develops from its building blocks, a fascinating experience that rewards patience — only the last bars leave you hoping for a final evolution that doesn’t come. The combined web of rhythms is often complex, but Davin and Levin put it across with such ease and musicality that mathematics never interfere with phrasing.

The album concludes with El Amor Brujo, full of nice touches to match — or even add to — Manuel de Falla’s orchestral sounds. Tremolos are to be expected in place of sustained notes, but how about that percussive knock on the body of the harp to end the “Danza del terror”? One highlight is the “Danza del juego de amor,” where Davin’s soulful melodies and Levin’s gentle accompaniment make way for this “game of love” to heat up into the finale.

While Banter doesn’t include liner notes, Davin gave some insight into these pieces and his partnership with Levin during an interview with ClevelandClassical.com before the Duo’s recital at the Cleveland International Classical Guitar Festival in 2017. That program included all the same works as this album (with the Glass offered as a surprise encore). You can also read our review of that concert here.

It might seem that there’s not a lot left to discover after three decades of experience with the Red Priest’s charming and evocative score, but this performance boasted a secret weapon: the young Spanish violinist Francisco Fullana, now the Orchestra’s artist-in-residence, whose affecting personality and easy virtuosity raised the solo part a quantum leap above the merely extraordinary. END_OF_DOCUMENT_TOKEN_TO_BE_REPLACED

END_OF_DOCUMENT_TOKEN_TO_BE_REPLACED

The Cleveland Orchestra’s second performance of the new season on Sunday afternoon, October 17 at the newly renamed Mandel Hall at Severance Music Center was just such an occasion. If the ensemble’s return to public concerts under the baton of Franz Welser-Möst wasn’t enough reason to light a bonfire, the Cleveland debut of a new work written for one of the Orchestra’s most popular soloists, and the swan song of one of its longest-serving members added extra fuel to the celebration. END_OF_DOCUMENT_TOKEN_TO_BE_REPLACED