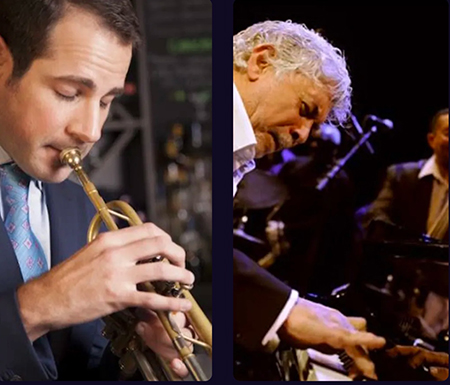 April 30 marks the 10th celebration of International Jazz Day. While a Global All-Star Concert is on the schedule, you can join a local Songbook Watch Party featuring trumpeter Dominick Farinacci and pianist Monty Alexander, streamed live from Tri-C’s LiPuma Center and rebroadcast throughout the weekend. Tri-C JazzFest pre-college students open the program, and afterwards, JazzFest director Terri Pontremoli talks with the artists.

Live, in-person performances in Oberlin include an indoor program on the Sacred Heart Concert series and al fresco performances by the Oberlin Chamber Singers and Oberlin Trombone Choir.

Friday’s honorees include Austro-Hungarian operetta composer Franz Lehár (born on April 30, 1870 in Komárom, now Komárno, Slovakia), American conductor Robert Shaw (born on this date in 1916 in Red Bluff, Iowa), American composer Ellen Taaffe Zwilich (who entered the world in Miami on this date in 1939), and Russian American choreographer George Balanchine, who debuted in 1904 in St. Petersburg as Georgi Melitonovitch Balanchivadze and made his final curtain call in New York City on the last day of April in 1983.

Lehár composed a number of light operas that became popular in Viennese circles, including the much-performed Merry Widow (Lustige Witwie). Some of them have found their way into the repertoire of American lyric theater companies like Ohio Light Opera. In lieu of live performances last summer, the Wooster-based organization produced a virtual season. Watch an episode here that includes two virtual performances of The Mock Marriage and visits archival scenes from other European operettas.

Before moving on to the Atlanta Symphony, Robert Shaw served as George Szell’s assistant with The Cleveland Orchestra, where he prepared the Orchestra Chorus for many performances while also maintaining his own professional ensemble, The Robert Shaw Chorale. In celebration of his centenary, Carnegie Hall made a series of documentaries showing how Shaw prepared for performances of major choral works. In this episode, he rehearses and conducts excerpts from Benjamin Britten’s War Requiem with the Orchestra of St. Luke’s, soprano Christine Goerke, tenor Richard Clement, baritone Benjamin Luxon, the Robert Shaw Festival Chorus, Robert Shaw Institute Singers, and the American Boychoir.

One of America’s pioneering female composers, in 1983 Ellen Taafe Zwilich was the first woman to win the Pulitzer Prize for Music. Her 2008 Septet for piano trio and string quartet was written for the Kalichstein-Laredo-Robinson Trio and the Miami Quartet, who play the unusual work on the 2014 recording, Passionate Diversions: a Celebration of Ellen Taaffe Zwilich. Listen here, or watch a 2012 video of a performance by the Newbury Tio and Amphion Quartet at the La Jolla Music Festival.

Balanchine, who was invited to the U.S. by Lincoln Kirstein, married the techniques of the Russian Imperial Ballet School with the traditions of Broadway and Hollywood to create the neoclassical style that became his signature as co-founder and director of the School of American Ballet and the New York City Ballet. One of his early works in collaboration with Igor Stravinsky is a perfect example of his approach. Apollon Musagete, later simply called Apollo, was first performed at the Metropolitan Opera in 1937. Watch a Canadian broadcast of the ballet from 1960, featuring Jacques d’Amboise as Apollo, Diana Adams as Terpsichore, Jillana as Calliope, and Francia Russell as Polyhymnia.