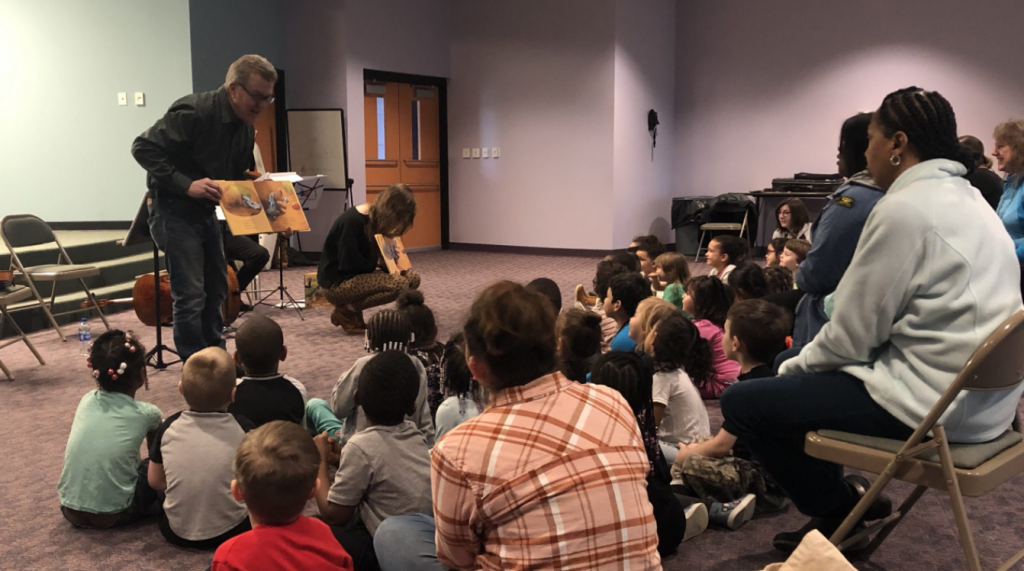 The Akron Symphony’s Unorchestrated podcast continues its four-part series on the Akron Symphony Chorus with a discussion about Haydn’s The Creation, including excerpts of the work as performed by the ASO and Chorus themselves. Listen here.

And whether you are 3 years old or 103, the Canton Symphony invites you to learn more about music and make it part of your life through the ensemble’s education programs (one such event pictured). See this season’s list of programs here.

On a much darker note, Reuters tells the story of Afghanistan’s all-female Zohra Orchestra in the days following the Taliban’s recent conquest. “The story of the orchestra… encapsulates the sense of shock felt by young Afghans…particularly women.”

One celebrity of early music, and one lesser-known visual-musical artist.

The more internationally famous name today is Christopher Hogwood (born September 10, 1941), the English conductor, harpsichordist, and musicologist who was a leading figure in the historically informed performance movement in the late 20th century. He passed away in 2014.

Among his most important positions, he was a co-founder of the Early Music Consort in 1967, and six years later started up the Academy of Ancient Music. The ‘80s began taking him more and more frequently across the pond, including what became a 15-year tenure as artistic director of Boston’s Handel & Haydn Society (1986-2001), and four years in Minnesota as music director of the Saint Paul Chamber Orchestra (‘88 to ’92).

Just as one place to start, hop around the six-hour playlist of one of his biggest recording projects, the complete Beethoven Symphonies with the Academy of Ancient Music, here on Spotify.

Our other Almanac Inductee™ is under-recognized outside of his home country: Lithuanian painter, composer, and writer Mikalojus Konstantinas Čiurlionis, born on this date in 1875 (Old Style calendar). Though he died at age 35, his oeuvre totaled hundreds of paintings and works of music, and he is considered a key figure in the development of European abstract art.

Perhaps it’s not surprising with those crossed artistic wires that Čiurlionis had synesthesia — in this case with colors and music. It’s also notable that several of his paintings are titled after musical forms, such as sonatas, preludes, and fugues.

Two listening and two viewing suggestions: first, his symphonic poem Miške (In the Forest) and one of his many works for solo piano, the Prelude in b-flat (“Dedication”), the latter performed by Gintaras Januševičius live at the 66th International Chopin Festival.

Then his two paintings under the umbrella of SONATA VI: Stellar Sonata (Allegro), pictured left, and Stellar Sonata (Andante), right. Just a quick glance and you can feel the difference in speed. 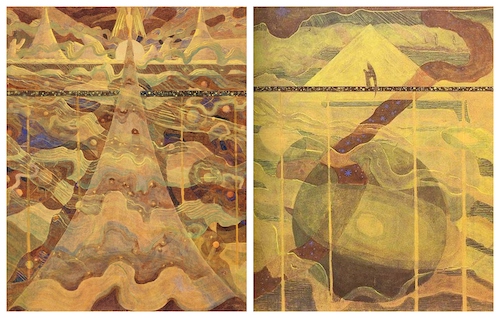