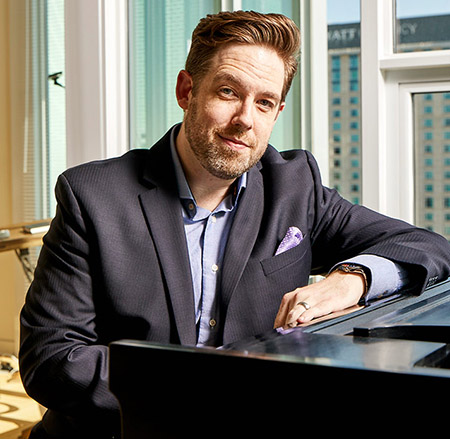 Former Cleveland Orchestra associate conductor Brett Mitchell has been named artistic director of Oregon’s Sunriver Music Festival after an unusual final round in which musicians and concert attendees shared comments and evaluations of the two remaining contestants — Mitchell and Kelly Kuo. In a press release, executive director Meagan Iverson wrote, “This wasn’t a competition, It was an extraordinary opportunity to see two acclaimed conductors shine and for everyone to be involved in the selection process.” Read more here.  After leaving Cleveland, Mitchell led the Colorado Symphony from 2017 to 2021, and currently serves as artistic partner with the Pasadena Symphony.

Kent State University’s Glauser School of Music has released its 2021-2022 concert brochure as an Issuu digital document. Download the pdf of “Coming Together Again: A Celebration of the Return of Live Music” here.

Rocky River Chamber Music Society will move the opening concert of its 2021-2022 season from its usual venue. The Auryn String Quartet from Cologne, Germany, will appear on October 4 at 7:30 pm at Lakewood Congregational Church as a stop on its 40th anniversary — and farewell — tour. The free concert will be a hybrid event, available both for in-person attendance and online.

Today, an interesting combination of early and contemporary events to celebrate or mourn, beginning with the installation of Pope Gregory I, aka Gregory the Great, as Bishop of Rome on September 3, 590 (he joined the heavenly multitudes in 604). Gregory is celebrated as the creator of the body of early Christian chant that bears his name, although the story of its origin and evolution is far more complex than the romantic legend that “Gregorian Chant” was dictated to him by the Holy Spirit in the form of a dove perched on his shoulder. Some of the more memorable chant melodies in what might be called “The Pre-Vatican II Great Roman Songbook” — like the Dies irae or the Veni, Creator Spiritus, have been used almost as leitmotivs by later composers. And Ottorino Respighi included a tribute to Gregory as the fourth movement of his 1925 orchestral work, Church Windows (Vetrate di Chiesa) works. Click here for a full performance in 2011 by Vasily Petrenko and the Orchestra dell’Accademia di Santa Cecilia.

Is Mahler dangerous to one’s health? Dutch conductor Eduard van Beinum, born on this date in 1900, suffered a fatal heart attack in Amsterdam in April, 1959 while rehearsing Mahler’s Third Symphony in Amsterdam. In memoriam, click here to watch Claudio Abbado and the Berlin Philharmonic play the Adagio from Mahler 3 in 1998 (and here for the complete symphony).

On this date in 1921, British musicologist, conductor, and keyboardist Thurston Dart was born in London, who later became one of the key figures in the early music movement. Celebrate with a selection of keyboard duets Dart recorded with Igor Kipnis, released in 1972.

And for today’s Something New, on the anniversary of his death in 1974 in San Diego, we recall the experiments that American composer Harry Partch made with many new instruments, including the Chromelodeon, Boo II, and Quadrangularis Reversum. His collection is visitable at the University of Washington in Seattle. Take a tour here with curator Charles Corey, presented on May 30, 2017.