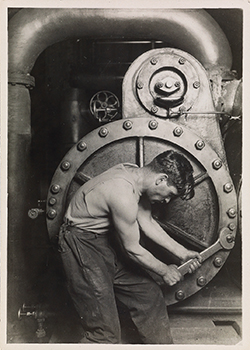 By the time that Labor Day was established as an official national holiday in 1894, 30 states were already setting a day aside to honor workers — an observance that became increasingly vital as the effects of the Machine Age unfolded. Among others, photographer Lewis Wickes Hine captured laborers with dignity in his fine art “photo stories” (above, his Powerhouse Mechanic, c. 1921).

“Work” has expanded to encompass a wide variety of human activity, as evidenced by a 2014 WQXR poll that asked listeners to nominate classical works that best capture the spirit of Labor Day. Submissions ranged from Handel’s Harmonious Blacksmith to Shostakovich’s Symphony No. 2, from Copland’s Fanfare For the Common Man (countered by Joan Tower’s Fanfare(s) for the Uncommon Woman) to Frederic Rzewski’s The People United Will Never Be Defeated,

One interesting suggestion was Haydn’s “Farewell” Symphony (No. 45), the musical documentation of a labor dispute between Prince Nikolaus Esterházy and his court orchestra that seems ironic during these trying times, when musicians of all kinds are experiencing furloughs, layoffs, and the disappearance of work.

On four Saturdays in September, the Bard Music Festival will livestream its 2020 festival from the Fisher Center at Bard College in Annandale-on-Hudson, New York. Artistic Directors Leon Botstein and Christopher H. Gibbs have curated “Out of the Silence: A Celebration of Music,” a series of concerts “celebrating the joy of music-making and Bard’s commitment to presenting unjustly neglected works.

“Programs will feature works by prominent Black composers alongside a selection of pieces from the Bard Music Festival archives, together tracing the history of classical music from the late 18th century to the present and affirming the centrality of music to life and our public culture.”

Concerts are free and will be streamed only at the scheduled time. Reservations are requested.

You can get outdoors on Saturday morning and enjoy an Akron Symphony duo while picking flowers, and take in an al fresco concert by the Russian Duo at a historic Akron mansion on Sunday.

There are lots of anniversaries to take note of this weekend: the births of composers Anton Bruckner in 1824, Amy Beach in 1867, Darius Milhaud in 1892, and Joan Tower in 1938, the death of Edvard Grieg in 1907, and the births of pianists Marc-André Hamelin in 1961 and Jean-Yves Thibaudet in 1961.

Bruckner’s symphonies have inspired The Cleveland Orchestra to sonic heights over the seasons. Click here for a complete, live performance of No. 8 led by George Szell in 1964, and here for a fragment of No. 5 led by Franz Welser-Möst performed at the Abbey of St. Florian in 2006, near Welser-Möst’s home town of Linz in Austria.

Darius Milhaud was a prolific composer, as shown in this rare documentary which gives glimpses of his personal and professional life. A performance of his jazz-inspired ballet La Création du Monde is preserved in an odd recording by The Cleveland Orchestra under Robert Shaw that apparently originated on the air during a fundraising campaign (note the opening announcement.)

Amy Marcey Cheney Beach, who sometimes wrote under her married name, Mrs. H.H.A. Beach, appears prominently in lists of American women composers. Her setting of Though the House Give Glimmering Light from Shakespeare’s A Midsummer Night’s Dream is a favorite of high-voice chorus. Here’s a performance by the upper half of Quire Cleveland led by Ross W. Duffin.

Speaking of women composers, as mentioned at the top of this Diary, Joan Tower’s set of Fanfare(s) for the Uncommon Woman are a clever response to a famous work by Aaron Copland. Here’s No. 6 performed by the Baltimore Symphony under Marin Alsop.

And on to our two pianists, who have appeared frequently with The Cleveland Orchestra. Relive the live stream of a recital by Marc-André Hamelin from his home in Boston on the 92nd St. Y series during the early days of the pandemic, and watch an interview with Jean-Yves Thibaudet on Zsolt Bognár’s Living the Classical Life.

Joining a long list of arrangers, Parker Ramsay has now transcribed the Variations for the modern pedal harp, an instrument for which he holds a master’s degree from Juilliard, in addition to a degree in history from Cambridge University, plus a master’s in historical performance (organ and harpsichord) and an artist diploma (organ) from Oberlin. END_OF_DOCUMENT_TOKEN_TO_BE_REPLACED

As organizations gingerly take steps to open up for business, it’s refreshing to have new content to listen to and write about after a solid six months of archival footage. END_OF_DOCUMENT_TOKEN_TO_BE_REPLACED

END_OF_DOCUMENT_TOKEN_TO_BE_REPLACED

Over the past few years, Brian Giebler has visited Northeast Ohio in settings both orchestral and choral, and with repertoire as diverse as Stravinsky, Bach, and the local premiere of a new work. In his impressive solo recording debut a lad’s love, released on Bridge Records, the New York City-based tenor turns his focus to British songs from the first half of the 20th century — a mix of cycles and individual works — and tops off the playlist with a touch of the modern. END_OF_DOCUMENT_TOKEN_TO_BE_REPLACED

To steal a phrase from the third-century Greek philosopher Sextus Empiricus, the mills of the gods grind slowly, but they grind exceedingly fine. The same goes for Deutsche Grammophon. It’s been a dozen years since they were recorded in Hamburg in 2009, but the German company has now issued fifteen Rachmaninoff piano pieces magnificently and poetically played by Sergei Babayan. END_OF_DOCUMENT_TOKEN_TO_BE_REPLACED

END_OF_DOCUMENT_TOKEN_TO_BE_REPLACED

After considering all its options, Cleveland’s period ensemble Les Délices decided to fully embrace the idea of creating pre-recorded “shows” in the place of live, in-person performances this season. END_OF_DOCUMENT_TOKEN_TO_BE_REPLACED