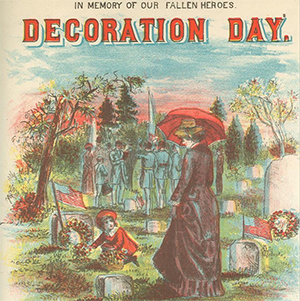 Parades and mass gatherings normally take place on Memorial Day — originally “Decoration Day,” a tribute to those who fell in the American Civil War that was first established in 1868 and grew into a national holiday assigned by Congress in 1968 to the last Monday in May. At a moment when the nation is opening up at various rates of speed and with different levels of confidence, how to mark the occasion?

One way is getting outside, while observing safety protocols, of course. Relatively balmy temperatures encourage us to emerge into fresh air and open spaces. In Northeast Ohio, Lake Erie beckons, and it’s a great time to remind ourselves of the enormous resources we enjoy by living in the Great Lakes region. Click here to watch a brief Nature Conservancy video, Incredible by Any Measure…The Great Lakes, and here to see a live performance of Part I of Cleveland composer Margaret Brouwer’s oratorio, Voice of the Lake (the other three acts can be found close by).

On the other hand, some rain is in the weekend forecast, so here are suggestions for indoor watching based on anniversaries that fall on these three days.

Charles Ives captured the special qualities of Decoration Day in the middle movement of his Holidays Symphony. Click here to watch an episode in the San Francisco Symphony’s “Keeping Score” series with Michael Tilson Thomas.

May 23 was the birthdate of Paraguayan composer Augustín Barrios Mangoré in 1885. His music is featured by guitarist David Russell in a full recital on Spanish TV (Russell was to have played on the Cleveland Classical Guitar Society series in April). Watch here.

On May 24, 1974, Edward Kennedy Ellington — “Duke” — died in New York at the age of 73. Click here to watch a documentary, On the Road with Duke Ellington from Don Kaart’s All That Jazz recorded shortly after the composer and bandleader’s demise.

May 25 is a memorable for the debuts of two of the world’s great opera houses. In 1869, the Vienna State Opera opened its doors with Mozart’s Don Giovanni. Watch a brief tour on Vienna/Now led by Adia Trischler, which includes a visit to the costume department and a look at what the Don might have worn, as well as a hint about future social distancing possibilities — performances piped outdoors on a jumbotron.

In the southern hemisphere, on May 25 of 1908, Arturo Toscanini opened the Teatro Colón in Buenos Aires with Verdi’s Aïda. You can take an extended video tour of the behind-the-scenes preparations for a 2019 production of Turandot here. (And on this date in 1944, Toscanini led a benefit concert in the old Madison Square Garden in New York that raised $100,000 for the Red Cross, and $10,000 more when Mayor Fiorello LaGuardia auctioned off the conductor’s baton during intermission.)

Speaking of opera, soprano Beverly Sills (née Belle Miriam Silverman and nicknamed “Bubbles”) was born on May 25, 1929 in Brooklyn. A cult figure as a singer and later renowned as a manager, in addition to wowing audiences with her coloratura, she ran New York City Opera from 1979 to 1989 and served as chair of Lincoln Center from 1994-2002. (She lived in Cleveland briefly in the late 50s). One of her reliable show-stoppers was the aria “Martern aller Arten” from Mozart’s Seraglio. I’ll not forget her performance at Tanglewood in the early 70s — there are probably pirated recordings still in circulation — but you can hear her sing it here with Aldo Ceccato and the London Symphony in 1974. Note: be patient — there’s a wonderfully symphonic introduction lasting nearly two minutes before the soprano sings.

END_OF_DOCUMENT_TOKEN_TO_BE_REPLACED

A new CD by Christa Rakich, who is currently Visiting Professor of Organ at the Oberlin Conservatory, gives a nod in two directions. As its title announces, it’s an homage to her former teacher and colleague, the late Yuko Hayashi, longtime professor at the New England Conservatory and curator of Boston’s Old West Church Organ Series. It’s also the first recording to be made of Richards, Fowkes & Co.’s Opus 16 instrument, built in 2008 for Goodson Chapel of the Duke Divinity School in Durham, North Carolina. END_OF_DOCUMENT_TOKEN_TO_BE_REPLACED

END_OF_DOCUMENT_TOKEN_TO_BE_REPLACED

Hailed by the New York Times as “The Best Classical Music Ensemble of 2018,” Wet Ink Ensemble has lived up to this acclaim once again with their recent release Glossolalia/Lines on Black. The album takes its name from the two extended works by Wet Ink members Alex Mincek (saxophone) and Sam Pluta (electronics). The remainder of the septet includes Eric Wubbels (piano), Erin Lesser (flutes), Ian Antonio (percussion), Josh Modney (violin), and Kate Soper (voice). END_OF_DOCUMENT_TOKEN_TO_BE_REPLACED

Croatian-born pianist Martina Filjak, now living in Berlin, has released her latest album, Light and Darkness, featuring music by Franz Liszt — plus an epilogue by Arvo Pärt. The disc confirms once again all the special technical and interpretive qualities that won her the gold medal at the Cleveland International Piano Competition in 2009. END_OF_DOCUMENT_TOKEN_TO_BE_REPLACED