The Cavani Quartet work with CSU student composers today at 4 in Drinko Recital Hall, at 7 pm, Les Délices proposes to reconcile early Romantic Lieder with the history of science (fairies meet microbes) in the next online episode of Salonera, and Youngstown State faculty Misook Yun, soprano, Sean Yancer, horn, and Caroline Oltmanns, piano (pictured) take on the diversity problem in German Lieder repertoire in a free 7:30 pm concert in Guzzetta Recital Hall at the University of Akron (also available online).

On Sunday morning at 8 am, while many of its patrons were just beginning to stir from their slumber, The Cleveland Orchestra released details of their 105th Season at Severance Music Center, the 21st under the leadership of Franz Welser-Möst. The repertoire includes four global premieres, one U.S. first performance, five commissions, and thirteen works to be played by the Orchestra for the first time. Download a pdf file with all the details here.

On April 8, ICE, the International Contemporary Ensemble announced that Columbia University Professor George E. Lewis will become artistic director of the ensemble later this month, the first Black leader in its 21-year history.

In an interview with the New York Times, Lewis, 69, said, “I’m looking to bring newer people who happen to have great ideas, but who might be overlooked by other ensembles or institutions, to the forefront so they can be noticed by everybody,” Lewis said. “It’s a sense of widening the community.”

The Violin Channel has compiled a list of the ensembles and artists who were honored at the 2022 Classical Grammy Awards, the 64th annual ceremony, postponed from January to April 3, and moved from Los Angeles to Las Vegas. Check out the list here.

Hang on tight – April 11 is a busy day in the annals of classical music.

And many firsts — perhaps the debut of Purcell’s Dido and Aeneas at Josias Priests’ school, the first performance of Bach’s Matthew Passion and Beethoven’s Archduke Trio, the visit of Mozart and his father to the Sistine Chapel, after which the young composer wrote Allegri’s famous Miserere down from memory, stealing one of the chapel choir’s closely guarded secrets, the opening of Amsterdam’s Concertgebouw in 1888 (the orchestra was born later that year), and the release of tenor Enrico Caruso’s first recording in 1902 (with 497 to follow). 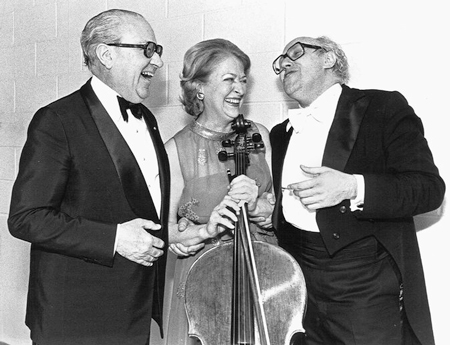 We’ll concentrate on Ginastera, the most prominent composer on the list, who like many Porteños (denizens of Buenos Aires) was of mixed Spanish and Italian ancestry — his father was Catalan, his mother Italian. He spent most of his career in Argentina, with brief sojourns in the U.S. (the first in 1945-47 to study with Aaron Copland at Tanglewood) before moving to Europe in 1970. (Photo: Ginastera with his wife, Argentine cellist Aurora Natola, and Russian cellist Mstislav Rostropovich.)

Ginastera’s compositions incorporated varying elements of traditional Argentine music in the course of his career, though those influences became more abstract over the decades.

Cleveland Orchestra principal cello Mark Kosower recorded the First Cello Concerto with his former orchestra, Germany’s Bamberg Symphony (follow along with the score), and played the Second Concerto with Cleveland in October of 2018 (here’s a brief excerpt from a Severance Hall  rehearsal with guest conductor Gustavo Gimeno).

In other Cleveland Orchestra performances, George Szell led Pampeana No. 3 in a live concert in November, 1956, and Louis Lane conducted the Variaciones Concertantes in a live radio broadcast in 1969.

More recently, Oberlin Harp Professor Yolanda Kondonassis recorded the Ginastera Harp Concerto on the Oberlin Music CD Ginastera: One Hundred. Her performance of the work with Raphael Jiménez and the Oberlin Orchestra was also featured in the inaugural edition of Oberlin Stage Left, where she talks about the piece with Conservatory Dean William Quillen.

END_OF_DOCUMENT_TOKEN_TO_BE_REPLACED

Rodgers & Hammerstein’s Cinderella was originally produced for television in 1957 — seven years after the animated Disney film was released — and starred Julie Andrews. According to the Rodgers & Hammerstein website, it was viewed by over 100 million people. END_OF_DOCUMENT_TOKEN_TO_BE_REPLACED

The story line has its origin in an 1855 play and an 1842 farce that Thornton Wilder mined for his 1938 play The Merchant of Yonkers. When that turned out to be a flop, in 1954 Wilder made the crucial decision to re-center the show around the character of the legendary marriage broker Dolly Gallagher Levi and renamed it The Matchmaker. END_OF_DOCUMENT_TOKEN_TO_BE_REPLACED

The Dodero Center for the Performing Arts at the Gilmore Academy in Gates Mills is one feature of an impressive campus. The auditorium is shallow, the stage is deep, and the ensemble played without a shell. Throughout the program, the sound, especially in instruments’ lower registers, tended to disappear. END_OF_DOCUMENT_TOKEN_TO_BE_REPLACED