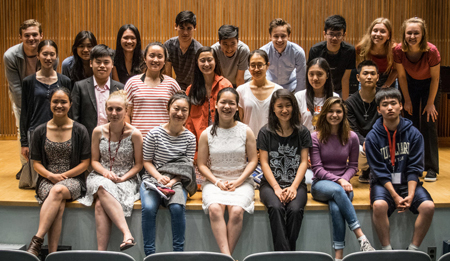 . Reviews of U.S. concerts by the Ukrainian Freedom Orchestra in New York and Washington, D.C.

. Anniversaries of the developer of the metronome, the inventor of the Theremin, and an African British composer, and a few settings of the Magnificat to mark the Feast of the Assumption

The Thomas and Evon Cooper International Violin Competition begins today with 2:30 pm and 7:30 pm Round One sessions in Warner Concert Hall at the Oberlin Conservatory. Attend in person for free, or tune in to a live feed to hear violinists 13-18 perform 30-minute programs.

Two articles in major dailies highlight the Ukrainian Freedom Orchestra, which has just performed at Lincoln Center (NY Times) and at the Kennedy Center in Washington D.C. (Washington Post).

On August 15, 1772, German inventor Johannes Nepomuk Maelzel, who developed the metronome, was born in Regensburg, and on that date in 1875, African British composer Samuel Coleridge Taylor entered the world in London, as did Russian inventor Leon Theremin, creator of the pioneering electronic instrument that bears his name, but in St. Petersburg in 1896.

Watch a historic video of Leon Theremin  playing one of the first electronic instruments to enter the concert world, or another video of an extraordinary gathering of 273 Theremin players going for a Guinness World Record in Japan in 2013.

August 15 marks the Feast of the Assumption in Catholic-leaning countries, the day when the Virgin Mary was bodily assumed into heaven according to the doctrine proclaimed in 1870. It’s a good day for parades (like the one in Cleveland’s Little Italy), but also a good occasion to enjoy a setting or two of the Magnjificat, the song that Mary impressively improvised in response to some surprising news brought by the Archangel Gabriel.

There are many listening possibilities, but here are three:

Johann Sebastian Bach composed his wonderfully compact version in E-flat for his first Christmas in Leipzig, incorporating four little seasonal pieces into the traditional text (they were later removed to create the Magnificat in D). Here’s a performance by the Amsterdam Baroque Orchestra and Choir led by Ton Koopman in St. Thomas’ Church during Bachfest Leipzig 2002.

Charles Villiers Stanford’s Magnificat and Nunc Dimittis in G is a standard at Anglican Choral Evensong services, and assigns solo voices to the roles of Mary (a boy soprano, usually) and the agèd Simeon (a baritone). Follow along with the score in a 2010 performance by the Choir of St. John’s College, Cambridge here.

And for a striking recent setting, follow the score in a performance of Arvo Pärt’s Magnificat dating from 1989. Paul Hillier conducts the Estonian Chamber Choir.