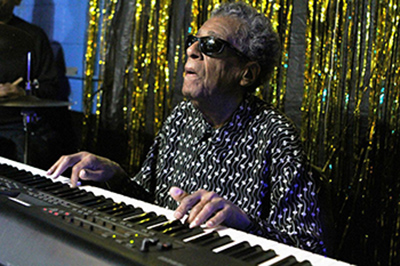 The Cleveland Chamber Music Society regrets that the concert by the Danish String Quartet scheduled for Tuesday, January 25 has been cancelled due to positive COVID-19 test results from one of the performers. The concert will not be rescheduled this season. Patrons who purchased tickets with a credit card (online or by phone) will receive an automatic refund to that card. Those who purchased tickets by mail should contact the office to receive a refund. Those who prefer to exchange their ticket(s) for another concert this season should be in touch by the end of this week.

Jazz organist Eddie Baccus Sr. (pictured above), passed away unexpectedly on Sunday, January 23, the very day he was to be honored with a concert at the Bop Stop. That event turned into a tribute evening and a benefit for his family.

Announcing the change of plans, the jazz club wrote

Eddie Baccus Sr. has been a beloved part of the Cleveland music scene since just about forever (the 60s). He met a fellow blind musician, the great flute/sax player Roland Kirk, at the Ohio State School for the Blind in late 40s, but chose a different path and opted to stay closer to home than Kirk. While Kirk toured the world and died young at age 41 of a stroke in 1977, Baccus has continued to roll his Hammond B-3 into area clubs, performing in a range of jazz styles, and collaborating with and mentoring other players, such as Joe Lovano, Ernie Krivda and his sax-playing son Eddie Baccus Jr.

Donations can be made here.

Among the entrances and exits on the classical music stage on January 24: the births of Frederick the Great (in 1712 in Berlin, the flute-playing king of Prussia who challenged the father of his court musician C.P.E. Bach to improvise a fugue on the spot during a visit in 1747. Also of the English oboist Evelyn Barbirroli in 1911 (spouse of conductor Sir John), and of Klaus George Roy in 1924, long-time program editor and annotator for the Cleveland Orchestra.

This is a good time to revisit Johann Sebastian Bach’s Musical Offering, a collection of canons, fugues, ricercars and a trio sonata inspired by the elder Bach’s visit to Potsdam, where Frederick proudly showed off his new-fangled fortepianos by Gottfried Silbermann and challenged the Cantor of Leizig to improvise a six-voice fugue on his own royal theme.

Click here to listen to a 2013 lecture by Michael Parloff from Music at Menlo on the subject of the Musical Offering — the first part of a two-part discussion about Bach’s late contrapuntal tours de force.

And here are two performances to enjoy and compare. Click here for a version by the Kuijken brothers — Sigiswald, flute, Wieland, violin, and Robert, viola da gamba, with harpsichordist Robert Kohnen — from the Old Town Hall in Leipzig during the Bach anniversary year in 2000. And click here for a version by Le Consort de Nations led by Jordi Savall with harpsichordist Pierre Hantal.

The cimbalom was the feature of the show, an instrument capable of taking on many personas. Its performer, Chester Englander, has shaped his career around the instrument, and has inspired composers to write more repertoire for it, some of which was presented on the program. END_OF_DOCUMENT_TOKEN_TO_BE_REPLACED

You wouldn’t expect that acoustic from a glance at the nave, which is wide and long, but not especially lofty. But when I guest conducted a local amateur choir and professional orchestra in Beethoven’s Mass in C there a few years back, during the first rehearsal we released the final chord of the “Gloria” and listened in astonishment for the next several seconds. The sound continued to roll down the space like the big wave that surfers dream about. END_OF_DOCUMENT_TOKEN_TO_BE_REPLACED