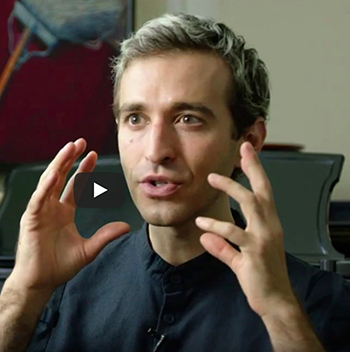 This would have been an “on” year for the biennial Cleveland Art Song Festival at the Cleveland Institute of Music, and its cancellation has been made more poignant because of the passing earlier this year of its founder, George Vassos (read a remembrance here).

One of the featured artists who would have given master classes and a recital this week is countertenor Anthony Roth Costanzo. Watch his interview in Episode 43 of Cleveland pianist and host Zsolt Bognár’s Living the Classical Life series. Costanzo describes “how he stumbled into singing and acting, what is unusual and powerful about falsetto singing, and what it feels like to be naked on stage, literally and figuratively.” And catch him in action here in a masterclass last February at the Manhattan School of Music, of which he’s an alumnus.

On this day in 1911, Gustav Mahler died in Vienna at the age of 50, shortly after returning from a few years in New York leading the Metropolitan Opera and the New York Philharmonic. His nine symphonies were all but forgotten until their gradual revival in the 1950s by Leopold Stokowski, Dimitri Mitropoulos, John Barbirolli, Aaron Copland, and Leonard Bernstein — assisted by the invention of the Long Playing phonograph record. Listen here to a performance of his Symphony No. 9 in D with George Szell and The Cleveland Orchestra, recorded live in Severance Hall the weekend of January 30—February 1, 1969. Mahler left a tenth symphony unfinished. Here’s a video of Pierre Boulez leading its Adagio with the Cleveland Orchestra.

And on May 18, 1925, Leoš Janáček’s opera The Cunning Little Vixen was first performed in Prague. In May of 2014, The Cleveland Orchestra gave memorable performances of the opera, staged by Yuval Sharon, that preserved the original comic-strip inspiration for the work, and revived the production in the fall of 2017. Before that first set of performances, Cleveland Orchestra personalities shared their thoughts about the work and talked about their preparations for opening night. Watch the video here.

END_OF_DOCUMENT_TOKEN_TO_BE_REPLACED

A new CD by Christa Rakich, who is currently Visiting Professor of Organ at the Oberlin Conservatory, gives a nod in two directions. As its title announces, it’s an homage to her former teacher and colleague, the late Yuko Hayashi, longtime professor at the New England Conservatory and curator of Boston’s Old West Church Organ Series. It’s also the first recording to be made of Richards, Fowkes & Co.’s Opus 16 instrument, built in 2008 for Goodson Chapel of the Duke Divinity School in Durham, North Carolina. END_OF_DOCUMENT_TOKEN_TO_BE_REPLACED

END_OF_DOCUMENT_TOKEN_TO_BE_REPLACED

Hailed by the New York Times as “The Best Classical Music Ensemble of 2018,” Wet Ink Ensemble has lived up to this acclaim once again with their recent release Glossolalia/Lines on Black. The album takes its name from the two extended works by Wet Ink members Alex Mincek (saxophone) and Sam Pluta (electronics). The remainder of the septet includes Eric Wubbels (piano), Erin Lesser (flutes), Ian Antonio (percussion), Josh Modney (violin), and Kate Soper (voice). END_OF_DOCUMENT_TOKEN_TO_BE_REPLACED

Croatian-born pianist Martina Filjak, now living in Berlin, has released her latest album, Light and Darkness, featuring music by Franz Liszt — plus an epilogue by Arvo Pärt. The disc confirms once again all the special technical and interpretive qualities that won her the gold medal at the Cleveland International Piano Competition in 2009. END_OF_DOCUMENT_TOKEN_TO_BE_REPLACED