At 7:30 pm, Lalia Mangione (violin) and Rebecca Shasberger (cello, guitar, and vocals) of the ensemble Renovare will take the stage of the Maltz Performing Arts Center as part of the Silver Hall Concert Series. It’s free, and you can stream it or attend in person, but tickets are requested.

Also at 7:30, but online, and with a pre-concert talk at 7, Les Délices debuts “The Highland Lassie” — a program of Scottish traditional music crossing the borders between folk song and art song. Click here to read Daniel Hathaway’s “pre-review” (the latest innovation in the vocabulary of ClevelandClassical.com since the pandemic began), and here for tickets.

Speaking of changes in classical music over the past 22 months, several local organizations have stepped into the podcasting sphere, including the Canton Symphony with Orchestrating Change. Hosted by Rachel Hagemeier and Matthew Jaroszewicz, the video series is designed around the goal of making the concert hall a more inclusive space. In Season 3, Episode 1, which dropped this past weekend, arts scholar and music lover MJ Albacete shares “why he thinks working towards a more equitable and diverse future is important for classical music.” Watch here, and take in an overview of this coming season here.

Aiming to further the same mission as the podcast, but in a different fashion, is the CSO’s Orchestrating Change Leadership Program. In 2021, the first year for this summer intensive, ten undergraduates discussed issues of inclusion in orchestral music, in addition to receiving arts leadership training. Their final product was the creation of an after-school music program that will begin in southeast Canton this year. The 2022 program will take place virtually June 13 – July 1, and is open to those entering college in fall ‘22 through those graduating in spring ‘22. Nominations close February 25 — click here if you have someone in mind.

Another summer program offered by the CSO, this one for string players at an intermediate-advanced level, is Camp Z, which goes from June 6-10 at Zimmermann Symphony Center. It’s led by Canton Youth Strings instructor Raylena Mae Bevington, includes coaching by CSO musicians, and culminates in a concert for the public. Registration information and more details can be found here.

After being postponed earlier this month due to concerns around COVID-19, the 2022 Grammy Awards have now been rescheduled to April 3 and relocated from Los Angeles to Las Vegas, with comedian Trevor Noah still set to host. Writing for NPR, Andrew Limbong covers that change, and some of the recent struggles for the awards show.

And last year, CD sales in the U.S. grew for the first time in 17 years. Add in a huge increase in sales for vinyl — which outsold CDs for another first in quite some time — and album sales also saw their first growth in a decade. Read “Not Dead Yet” here from Inside Radio. 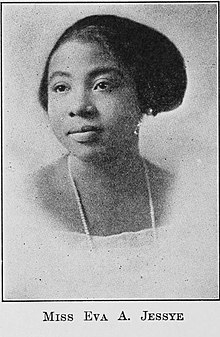 Today marks 127 years since the birth of American conductor Eva Jessye in Coffeyville, Kansas. Jessye is known as the first Black woman to achieve international recognition as a choral conductor.

Founder of the Eva Jessye Choir (at first named the Original Dixie Jubilee Singers), she and the group frequented the silver screen, the stage, the radio, and the record booth as their renown grew and grew. Two of their most famous performances came in New York. She directed her choir in the 1935 premiere of George Gershwin’s Porgy and Bess (and then in every incarnation of the show for 30 years), and in the 1934 Broadway production of Four Saints in Three Acts, an opera by Virgil Thomson and Gertrude Stein.

The latter was of industry-wide importance, not only musically — a departure in style from what the public expected of Black musicians — but also economically. The choir was paid for rehearsals after Jessye demanded it, pushing back against a tradition of discriminatory salaries and, more simply, the nonpayment of choruses for rehearsal. 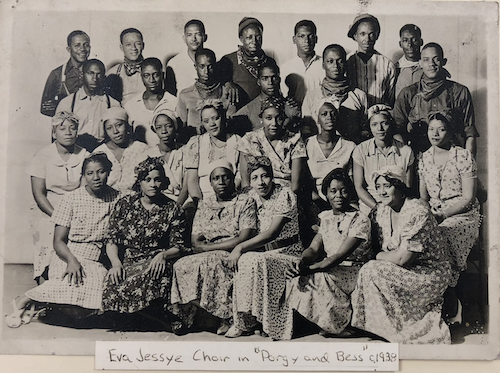 Continuing her commitment to civil rights, Jessye was part of a Porgy and Bess cast strike in Washington, D.C., forcing the management of the National Theatre to temporarily desegregate its seating. In that same city, decades later, the Eva Jessye Choir was named the official choral ensemble for the 1963 March on Washington, giving performances including We Shall Overcome.

Listen to the Eva Jessye Choir in a 1940 Decca recording of “Clara, Clara” from Porgy and Bess here — they enter at 1:10.

Jessye published My Spirituals in 1927, a cross between a book of arrangements and an autobiography. Soprano Marti Newland gives a live performance of I’m a Poor Li’l Orphan from that book here.

In the classroom, she taught at Pittsburg State University (Pittsburg, Kansas) and the University of Michigan, though writing in letters, she expressed frustration at being under-appreciated in Ann Arbor, and at being remembered only for her work on Porgy and Bess rather than her other work, including her mentorship of young artists.

Her own compositions include The Life of Christ in Negro Spirituals, The Chronicle of Job, and the oratorio Paradise Lost and Regained, which drew on both spirituals and Milton’s Paradise Lost. I haven’t succeeded yet in tracking down a recording — here is where I glance hopefully at our enthusiastic readers.

We’ll end with a quote from Jessye:

The cimbalom was the feature of the show, an instrument capable of taking on many personas. Its performer, Chester Englander, has shaped his career around the instrument, and has inspired composers to write more repertoire for it, some of which was presented on the program. END_OF_DOCUMENT_TOKEN_TO_BE_REPLACED

You wouldn’t expect that acoustic from a glance at the nave, which is wide and long, but not especially lofty. But when I guest conducted a local amateur choir and professional orchestra in Beethoven’s Mass in C there a few years back, during the first rehearsal we released the final chord of the “Gloria” and listened in astonishment for the next several seconds. The sound continued to roll down the space like the big wave that surfers dream about. END_OF_DOCUMENT_TOKEN_TO_BE_REPLACED