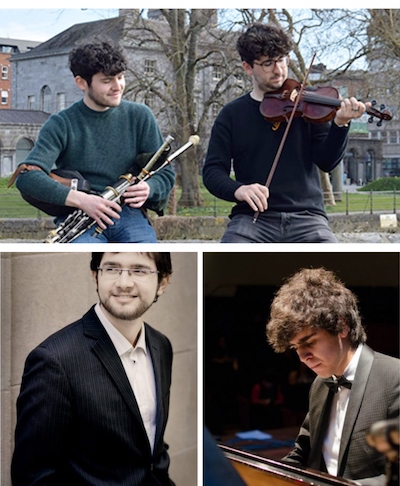 •In the news: Paul Jacobs celebrates Franck’s 200th, and The Onion “reports” on a conductor tampering with his baton

•Almanac: Franck’s wedding gift to Ysaÿe, premiered in the dark

At 7:00 pm, it’s Irish traditional music as heard on uilleann pipes and fiddle in a performance by Colm Broderick (County Carlow, Ireland) and Patrick Finley (Atlanta). The concert is presented by KBB Production Company and takes place at Plank Road Tavern in Lakewood.

And at 7:30 at CIM, it’s opening night for the 10th season of ChamberFest Cleveland. “Exquisite Beginnings” includes Walker’s Cello Sonata, Brahms’ Piano Quartet No. 2, and Mozart’s Piano Sonata No. 16 in a duo-piano arrangement by Grieg.

Pianist Evren Ozel spoke to ClevelandClassical.com’s Daniel Hathaway about two of those pieces.

“He’s a wonderful composer,” Ozel said of Walker. “…to me, his music communicates this sense of strength. His piano writing feels like it’s so grounded — its power and emotional impact really come from that. The Cello Sonata is a very fun piece. The last movement in particular has this dance-like quality — very rhythmic and very, very fun.”

Ozel also explained that in the Mozart/Grieg duo, his part will simply be the original Sonata, while Roman Rabinovich will be playing the accompaniment that Grieg wrote on top of it.

“It’ll be interesting. I haven’t played that sonata in years, and in a way it’s one of the pieces I feel the most insecure about, because everyone plays it when they’re a very young kid. I’d be worried if it didn’t sound absolutely impeccable. I’m looking forward to preparing it as a chamber work rather than as a solo piece.”

Tickets for both events can be found in our Concert Listings.

Organist and composer César Franck is not set to return to our Almanac until late 2022. But December 10, 2022 will mark two centuries since he was born — the kind of big, round anniversary that deserves recognition throughout the year.

And while the celebrations have not been many, Paul Jacobs certainly took it to heart to pay his respects. Jacobs recently performed Franck’s twelve major organ works across two recitals at New York City’s Church of St. Mary the Virgin — one in March, one in June — and those concerts have been reviewed by Zachary Woolfe in The New York Times.

Meanwhile, the jokesters at The Onion have done it again, “reporting” on a conductor who has received eight-concert suspension for the use of a corked baton. “We’re disappointed that it had to come to an investigation, but [the] recent sharp increase in keeping the woodwinds coherent and controlling the volume of the timpani did raise some eyebrows. Normally you don’t see that much of a leap in precision unless the baton’s been tampered with to become lighter.” So true.

I lied earlier about César Franck, who will make his next Almanac appearance sooner than expected — today in fact, substituting for his friend Eugène Ysaÿe, the composer/violinist/conductor was born on this date in Liège in 1858. (Ysaÿe will understand.)

Franck comes into the picture because he wrote his much-admired Violin Sonata in A as a wedding gift for Ysaÿe. After receiving the piece on the morning of the wedding, Ysaÿe and pianist Marie-Léontine Bordes-Pène had a quick rehearsal, then played the Sonata for the other guests at the wedding.

That duo would give the official premiere at a museum in Brussels three months later — and that’s an interesting story in itself. The program began in the late afternoon, with the Sonata placed in the most honorable position: the finale. But the concert was so long that when the time arrived for the Sonata to be played, the sun had gone down — and museum officials forbade artificial light in the gallery.

Rather than abandon the premiere, Ysaÿe and Bordes-Pène pressed on, having to rely on memory for the final three movements as the room grew darker and darker. So you can understand why they played the opening movement a few clicks faster than Franck intended — something he ended up approving of regardless of the lighting situation: “From now on there will be no other way to play it.”

Going back to the 2019 season of ChamberFest Cleveland, listen to a performance by another excellent duo: violinist Nathan Meltzer and — a familiar name from today’s Diary — pianist Evren Ozel.

With this work, premiered in 1907, Sibelius offered a bold departure from the explosive emotionalism so prevalent in late-Romantic era music. This symphony was a renewed embrace of Classicism’s purity of form and melody, and one that, oddly enough, left many initial audiences of the day somewhat bewildered. END_OF_DOCUMENT_TOKEN_TO_BE_REPLACED

After eating a Po’boy from The Dawg Bowl Cajun food truck, I caught the first half of Brian Culbertson’s show in The Connor Palace Theatre. END_OF_DOCUMENT_TOKEN_TO_BE_REPLACED