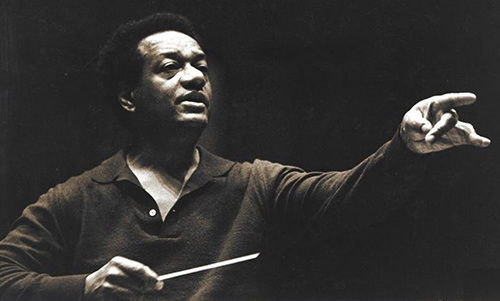 In a WQXR editorial, Philadelphia Inquirer critic David Patrick Stearns traces the later careers of Black conductors who were prominent during the 1970s in “America’s Lost Generation.”

And in “The Last Water Fountain,” a long article on San Francisco Classical Voice, Mark Macnamara considers the persistent issue of systemic racism in the classical performing arts.

OPERA UNDER THE BIG TOP:

Opera Atlanta will present nine performances each of its October and November titles — Pagliacci and the The Kaiser of Atlantis — to live audiences of 240 in an airy circus tent set up on a baseball diamond, with a maximum of 13 orchestral musicians. Read the ArtsAtl article here.

Our pandemic standbys — WCLV and the MET Opera — are on duty as usual today, WCLV with Johann Strauss Jr. waltzes and Beethoven’s Seventh Symphony on Lunchtime with The Cleveland Orchestra, and the MET with Alban Berg’s Lulu during its 20th century opera week.

And a head’s up: on Friday evening at 7 in St. Peter’s Church in Canton, harpist Parker Ramsay will present the first local, live performance of his transcriptions of Bach’s Goldberg Variations. Ramsay, who recently received his artist diploma from the Oberlin Conservatory, recorded the work in the chapel of King’s College, Cambridge, where he previously served as organ scholar. The CD will be released on September 18 on the King’s College label.

Speaking of the harp, the famous Franco-American harpist, composer, and pedagogue Marcel Grandjany was born on this date in Paris in 1891, and continued his career in the U.S. beginning in 1940. In this documentary video, Grandjany shows us his approach to playing and teaching the instrument.

And on this date in 1987, American composer Morton Feldman died in Buffalo, NY, where he taught at the University after spending his first 47 years working in his family’s children’s coats business.

A friend of John Cage and other avant garde composers, Feldman began his compositional career writing “indeterminate music” transmitted in unconventional, sometimes graphic scores, and after 1977 turned to quiet works of extraordinary length.

I stopped in to hear part of that performance after covering another event, and wrote in a review:

For a taste of that work, watch a video of a 55-minute excerpt from a performance on November 2, 2014 by flutist Claire Chase, keyboardist Sarah Rothenberg, and percussionist Steven Schick, in Houston’s Rothko Chapel on the Da Camera chamber music series.

And here’s a shorter Feldman work from 1970 — before he embarked on his extended duration pieces: his The Viola in My Life 2 performed by the CIM New Music Ensemble in Mixon Hall on April 2, 2017.

Joining a long list of arrangers, Parker Ramsay has now transcribed the Variations for the modern pedal harp, an instrument for which he holds a master’s degree from Juilliard, in addition to a degree in history from Cambridge University, plus a master’s in historical performance (organ and harpsichord) and an artist diploma (organ) from Oberlin. END_OF_DOCUMENT_TOKEN_TO_BE_REPLACED

As organizations gingerly take steps to open up for business, it’s refreshing to have new content to listen to and write about after a solid six months of archival footage. END_OF_DOCUMENT_TOKEN_TO_BE_REPLACED

END_OF_DOCUMENT_TOKEN_TO_BE_REPLACED

Over the past few years, Brian Giebler has visited Northeast Ohio in settings both orchestral and choral, and with repertoire as diverse as Stravinsky, Bach, and the local premiere of a new work. In his impressive solo recording debut a lad’s love, released on Bridge Records, the New York City-based tenor turns his focus to British songs from the first half of the 20th century — a mix of cycles and individual works — and tops off the playlist with a touch of the modern. END_OF_DOCUMENT_TOKEN_TO_BE_REPLACED

To steal a phrase from the third-century Greek philosopher Sextus Empiricus, the mills of the gods grind slowly, but they grind exceedingly fine. The same goes for Deutsche Grammophon. It’s been a dozen years since they were recorded in Hamburg in 2009, but the German company has now issued fifteen Rachmaninoff piano pieces magnificently and poetically played by Sergei Babayan. END_OF_DOCUMENT_TOKEN_TO_BE_REPLACED

END_OF_DOCUMENT_TOKEN_TO_BE_REPLACED

After considering all its options, Cleveland’s period ensemble Les Délices decided to fully embrace the idea of creating pre-recorded “shows” in the place of live, in-person performances this season. END_OF_DOCUMENT_TOKEN_TO_BE_REPLACED