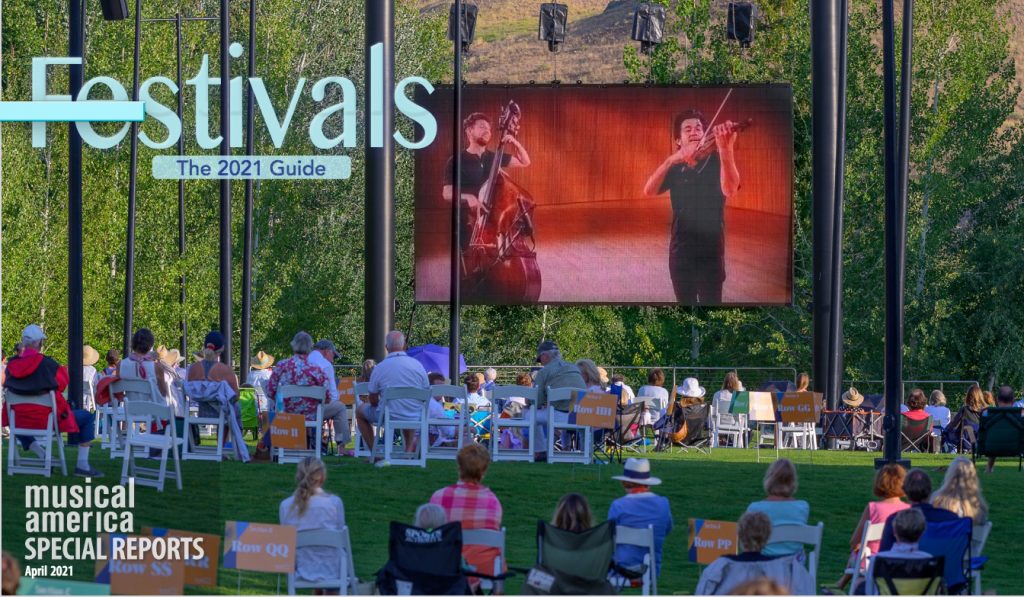 Now that people are beginning to venture out again after a long stint of pandemic cocooning, summer festivals are beckoning. Musical America has just released their guide to over 100 of them. “We’ve asked each about their COVID-19 safety protocols, along with their dates, places, artists, and assorted platforms. Many heading outside: Aspen Music Festival and Tanglewood already have outdoor venues [Blossom too!] Those that don’t are finding them: Central City Opera Festival, for instance, is taking Carousel and Rigoletto to a nearby Garden Center and staging Dido & Aeneas in its backyard.” Read more here.

Summit Choral Society’s “Sing WIth Me,” a comprehensive early childhood music program for children from birth to age 5 (Pre-K) and their parents and caregivers, begins on Thursday, April 8. The Akron-based program is directed by Principal Conductor Heather J. Cooper. Find out more here.

More from Akron: Tuesday Musical is seeking applicants with proven abilities in artistic operations, development, and educational programming for their full-time position of Director of Artistic Operations and Educational Engagement in May. Read the position description and application requirements here. Applications received by April 26 will receive priority consideration, but will be accepted for consideration until the position is filled.

New Music USA announces the creation of the New Music Creator Development Fund, which offers grants to individuals who need support to reach the next stage in their creative practice during the COVID-19 Pandemic. Read more here.

In a New York Times article, Geeta Dayal writes, “The school’s faculty over the years has been practically an index of maverick artists, including Darius Milhaud, at Mills for three decades beginning during World War II; Luciano Berio, who came at Milhaud’s invitation; Lou Harrison, who built an American version of the Indonesian gamelan percussion orchestra; the “deep listening” pioneer Pauline Oliveros; Robert Ashley, an innovator in opera; Terry Riley, a progenitor of Minimalism; the influential composer and improviser Anthony Braxton; James Fei, a saxophonist and clarinetist who works with electronic sounds; and Maggi Payne, a longtime director of the Center for Contemporary Music, Mills’s laboratory for electronic work since the 1960s, when Oliveros was its first leader.”

Russian composer Igor Stravinsky took his final bow in New York on this date in 1971, as did the great American blind singer-songwriter Ray Charles in Beverly Hills in 2015 (official name: Ray Charles Robinson).

Salzedo single-handedly created the role of the modern virtuoso concert harpist, establishing a summer harp colony in Camden, Maine, founding the harp department at the Curtis Institute of Music, and teaching at the Juilliard School. Listen to the master himself play his Variations on a Theme in Ancient Style, as well as to Debussy’s Danse Profane performed by Alice Chalifoux, and to a performance of his Steel by the Salzedo Harp Duo (Nancy Lendrim and  Jody Guinn) on the April 11, 2018 Brownbag Concert at Trinity Cathedral.

If Stravinsky needs an introduction, here’s one that Cleveland Orchestra Music Director Franz Welser-Möst provided before the Orchestra’s all-Stravinsky concerts in Severance Hall in March of 2017. And anyone concerned about the younger generation carrying the classical music torch forward should give a listen to Brett Mitchell leading the Cleveland Orchestra Youth Orchestra in the 1947 version of Petrushka in March, 2016.

Equally at home in symphonic music, Hollywood scores, and jazz, Previn had serial relationships with the London and Pittsburgh Symphonies, and the Los Angeles, Royal, Oslo, and Vienna Philharmonic orchestras.

His opera based on Tennessee Williams’ A Streetcar Named Desire was produced by Scott Skiba and Cleveland Opera Theater in December 2015. Listen to Benjamin Czarnota singing Stanley Kowalski’s aria “It’s gonna be all right” here. And here’s a recording of Previn’s live performance of Gershwin’s Rhapsody in Blue on a 1966 episode of the Bell Telephone Hour.

Ray Charles was blinded by glaucoma in childhood, but that scarcely held him back in his distinguished career. Watch him here rehearsing in Bourges, France in 1987, introducing Nat “King” Cole at the 2000 Rock Hall Induction Ceremony, and joining Gospel diva Sarah Jordan Powell in “Christmas in Ettal” in Germany in 1979.

For its latest In Focus episode, “Visions and Impressions,” The Cleveland Orchestra makes a gesture in the direction of welcoming winds back into the action, although principal flute Joshua Smith’s contribution to the event comes in the form of two unaccompanied pieces that leave him looking very lonely on the Severance Hall stage. END_OF_DOCUMENT_TOKEN_TO_BE_REPLACED

LD’s artistic director Debra Nagy introduces the hour-long program with a discourse on the importance of the garden and its centerpiece, the fountain, for artists and musicians of the 14th century. Later in the program, Blue Heron artistic director Scott Metcalfe expands on the subject by exploring the Trinitarian metaphor behind that bubbling source of water in the Medieval mind. END_OF_DOCUMENT_TOKEN_TO_BE_REPLACED

END_OF_DOCUMENT_TOKEN_TO_BE_REPLACED

The latest program, which visits the ghetto and palace at Mantua and the ghetto and church at Venice, uses expressive instrumental music by Salamone Rossi, Giuseppe Sammartini, Antonio Vivaldi, and Alessandro Marcello, two of Benedetto Marcello’s 50 psalm settings, and Hebrew prayers and songs associated with Passover and Purim to evoke the rich cultural life of those towns. END_OF_DOCUMENT_TOKEN_TO_BE_REPLACED