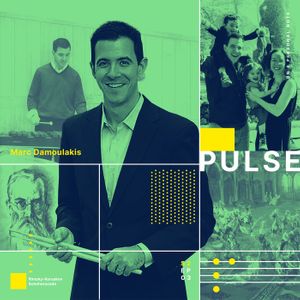 The Cleveland Orchestra has released the third podcast in its second “On A Personal Note” series (there will be ten episodes in total). “Pulse” features an interview with Principal Percussionist Marc Damoulakis, who talks about “feeling the rhythm from an early age and what it means to keep time for The Cleveland Orchestra.” Watch here.

And Puccini is the topic of the week on the MET Opera’s nightly streams. Does La Fanciulla del West qualify as a “Spaghetti Western?” Deborah Voigt stars in tonight’s rebroadcast of that title from January, 2011.

AND SPEAKING OF OPERA…

The New York Times’ Spain and Portugal correspondent reports that last Sunday’s Teatro Real performance in Madrid was cancelled after spectators spent more than an hour shouting and clapping to protest against what they said were insufficient social distancing measures in the opera house’s mezzanine levels.” Ironically, the opera was Verdi’s Un Ballo in Maschera (“The Masked Ball”). Read about it here.

Meanwhile, in London, The Guardian’s critic bicycled to the Alexandria Palace to witness Europe’s first drive-in opera, the English National Opera’s La Bohéme. “Despite the drolleries of set design and costume, sublimity triumphs. As Mimi lies dead and grief-stricken Rodolfo flees between parked cars, as if towards the garden centre (mate, it’s closed for the night), the production contrives to be deeply moving, despite the fact that the communal pleasure of being in a live audience is almost entirely lacking. A spattering of applause is drowned out by car horns.” Read the review here.

In other news from the opera world, the New York Times reported today that fired Metropolitan Opera conductor James Levine was paid $3.5 million in a settlement with the company that had not been previously disclosed.

In a related story, conductor Zubin Mehta, recovering from cancer surgery, told the Wiener Zeitung that he has invited both Levine and Placido Domingo to pursue “bold projects” at the Florentine opera house of which he’s honorary president. “We’ll leave the blacklists to American puritanism.”

On September 22, 1989, Russian-American composer Irving Berlin died at the age of 101 in New York City, having contributed some 1,500 songs to the mythical Great American Songbook over his 60-year career. One of the most celebrated was “God Bless America,” indelibly linked to the singer Kate Smith, but sung by Berlin himself on the Ed Sullivan Show on May 5, 1968. For just another taste of Berlin’s classic tunes, here’s a performance of Blue Skies by Cleveland’s TOPS Swing Band from the Trinity Cathedral Brownbag Concert on November 13, 2013.

Polish-American violinist Isaac Stern died in New York City on this date in 2001 at the age of 81. In addition to his distinguished career as a soloist, Stern organized a campaign to save New York’s Carnegie Hall from developers in the 1960s. The main auditorium is named in his honor.

Stern interviewed Christoph von Dohnányi in 2000 when The Cleveland Orchestra was invited to open the 110th season of the hall. And conductor Michael Stern reflected here on his father’s life in music as part of the centenary celebrations of the violinist’s birth.

Before coming to Cleveland, I taught at Groton School in Massachusetts, where Isaac Stern was a favorite of the second headmaster and his wife. The story goes that they tried on several occasions to set up a concert for the students, but Stern’s management always turned them down. The solution: a rumor would be circulated that Mr. Stern would be “practicing” at a certain hour in the auditorium, and as if by magic, the entire school showed up to listen.

The Cleveland Orchestra’s second performance of the new season on Sunday afternoon, October 17 at the newly renamed Mandel Hall at Severance Music Center was just such an occasion. If the ensemble’s return to public concerts under the baton of Franz Welser-Möst wasn’t enough reason to light a bonfire, the Cleveland debut of a new work written for one of the Orchestra’s most popular soloists, and the swan song of one of its longest-serving members added extra fuel to the celebration. END_OF_DOCUMENT_TOKEN_TO_BE_REPLACED

Cleverly, CityMusic’s latest concert led listeners through these changes one step at a time. “Musical Matrix” took transformation as its theme, and each piece on the October 2 program at the Maltz Performing Arts Center (the second of two performances) put its spin on the subject. END_OF_DOCUMENT_TOKEN_TO_BE_REPLACED