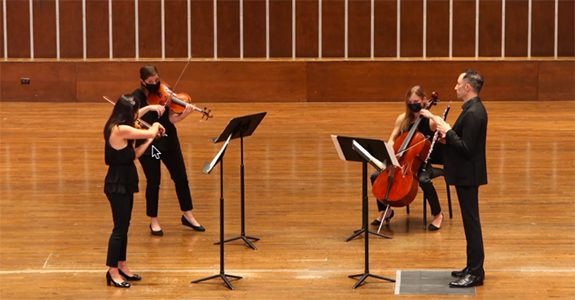 The Violin Channel is celebrating the half-century mark of the Chamber Music Society of Lincoln Center with a two-day festival featuring eight full-length concerts on Tuesday and Wednesday, September 8 & 9. Details and streaming links here.

On this date in 1613, Italian composer Don Carlo Gesualdo, Prince of Venosa, died in Naples. Distinguished for his harmonic adventures in madrigals and sacred music, Gesualdo was also notorious for having murdered his first wife and her lover after catching them in flagrante delicto. Cecil Gray and Peter Warlock (the nom de plume for composer Philip Heseltine) tell the story in their 1926 book, Carlo Gesualdo, Prince of Venosa: Musician and Murderer. A court refused to prosecute.

Click here to watch Gesualdo, Death for Five Voices (described by the poster as “an odd documentary film about a very odd man”). There are English subtitles. And here to watch a performance of Gesualdo’s Tenebrae factae sunt (a responsory for Good Friday) by TENET Vocal Artists, including tenors Owen McIntosh and Jason McStoots, who have recently performed in Cleveland with Apollo’s Fire and Les Délices. Or take a deep plunge into his madrigals courtesy of Ensemble Métamorphoses with this recording of his Sixth Book (score included).

Listen to Dohnányi’s interpretations of Dvořák’s 6th Symphony and Strauss’s Till Eulenspiegels lustige Streiche with The Cleveland Orchestra as an efficient way of celebrating three anniversaries with two recordings!

Joining a long list of arrangers, Parker Ramsay has now transcribed the Variations for the modern pedal harp, an instrument for which he holds a master’s degree from Juilliard, in addition to a degree in history from Cambridge University, plus a master’s in historical performance (organ and harpsichord) and an artist diploma (organ) from Oberlin. END_OF_DOCUMENT_TOKEN_TO_BE_REPLACED

As organizations gingerly take steps to open up for business, it’s refreshing to have new content to listen to and write about after a solid six months of archival footage. END_OF_DOCUMENT_TOKEN_TO_BE_REPLACED

END_OF_DOCUMENT_TOKEN_TO_BE_REPLACED

Over the past few years, Brian Giebler has visited Northeast Ohio in settings both orchestral and choral, and with repertoire as diverse as Stravinsky, Bach, and the local premiere of a new work. In his impressive solo recording debut a lad’s love, released on Bridge Records, the New York City-based tenor turns his focus to British songs from the first half of the 20th century — a mix of cycles and individual works — and tops off the playlist with a touch of the modern. END_OF_DOCUMENT_TOKEN_TO_BE_REPLACED

To steal a phrase from the third-century Greek philosopher Sextus Empiricus, the mills of the gods grind slowly, but they grind exceedingly fine. The same goes for Deutsche Grammophon. It’s been a dozen years since they were recorded in Hamburg in 2009, but the German company has now issued fifteen Rachmaninoff piano pieces magnificently and poetically played by Sergei Babayan. END_OF_DOCUMENT_TOKEN_TO_BE_REPLACED

END_OF_DOCUMENT_TOKEN_TO_BE_REPLACED

After considering all its options, Cleveland’s period ensemble Les Délices decided to fully embrace the idea of creating pre-recorded “shows” in the place of live, in-person performances this season. END_OF_DOCUMENT_TOKEN_TO_BE_REPLACED