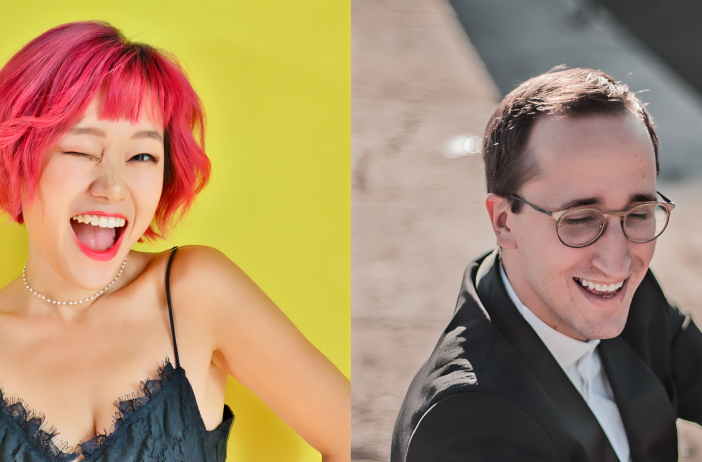 ChamberFest Cleveland artistic directors Franklin Cohen, Diana Cohen, and Roman Rabinovich have announced details of their tenth anniversary series, which will run for three weeks in June and feature 35 works by 27 composers. Click here for the “Season at a Glance” schedule.

Even as their country is working hard to repel a brutal invasion by Russian forces, the newly-formed Ukrainian Freedom Orchestra is planning a new international initiative. Read “Denouncing War, Ukrainian Musicians Unite for a World Tour” in the New York Times.

On this date in classical music history, Russian-American musicologist, composer, conductor, and (according to himself) standup comedian Nicolas Slonimsky was born in St. Petersburg in 1894. And on April 24, 1915, Russian composer Alexander Scriabin died of blood poisoning at the age of 43.

Slonimsky, who died in 1995, was one of the great characters of the 20th century. As editor of Baker’s Dictionary of Music and Musicians, he penned priceless autobiographies as prefaces to its various editions, and edited such compendia as The Lexicon of Musical Invective, a collection of “critical assaults on composers since Beethoven’s time.”

Watch the documentary A Touch of Genius here, and enjoy his appearance on the Johnny Carson Show in 1986 at the age of 92, where Slonimsky “speaks about Frank Zappa (4:40​), demonstrates conducting quintuple time with one hand and duple time with the other (7:21​), tries to demonstrate his perfect pitch (10:51​) and plays Chopin’s ‘Black Key’ Étude with an orange (12:08​).”

Also check out a witty and wide-ranging interview Slonimsky had with Bruce Duffie in 1986.

Scriabin made an impressive splash in the Russian piano world during his brief lifetime, but was almost as quickly forgotten. His pieces regularly show up in piano competitions. Martin James Bartlett, winner of Piano Cleveland’s COVID-era Virtu(al)oso Competition, played Scriabin’s Fourth Sonata in the final round (watch here).

And Martina Filjak, 2009 CIPC Gold Medalist, knocked everyone’s socks off in her semifinal round with Scriabin’s Nocturne for the Left Hand.

END_OF_DOCUMENT_TOKEN_TO_BE_REPLACED

Rodgers & Hammerstein’s Cinderella was originally produced for television in 1957 — seven years after the animated Disney film was released — and starred Julie Andrews. According to the Rodgers & Hammerstein website, it was viewed by over 100 million people. END_OF_DOCUMENT_TOKEN_TO_BE_REPLACED

The story line has its origin in an 1855 play and an 1842 farce that Thornton Wilder mined for his 1938 play The Merchant of Yonkers. When that turned out to be a flop, in 1954 Wilder made the crucial decision to re-center the show around the character of the legendary marriage broker Dolly Gallagher Levi and renamed it The Matchmaker. END_OF_DOCUMENT_TOKEN_TO_BE_REPLACED

The Dodero Center for the Performing Arts at the Gilmore Academy in Gates Mills is one feature of an impressive campus. The auditorium is shallow, the stage is deep, and the ensemble played without a shell. Throughout the program, the sound, especially in instruments’ lower registers, tended to disappear. END_OF_DOCUMENT_TOKEN_TO_BE_REPLACED