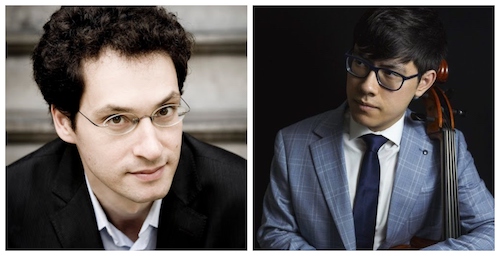 ChamberFest Cleveland opens its season tonight at 7:00 pm at The Grove Amphitheatre in Mayfield. The evening is titled after Dvořák’s Legends, performed in a new arrangement by Shai Wosner for clarinet, viola, and piano. Also on the docket: Enrique Granados’ Sonata for Violin and Piano, Paul Wiancko’s American Haiku, and Franz Schubert’s Trio No. 2 in E-flat. It’s free, but reservations are required. As a preview and to get to know some of the artists, read our conversations with Shai Wosner and cellist Zlatomir Fung.

There are also numerous concerts today online from the Boston Early Music Festival, plus a pair of streams from the New York Opera Festival and Orchestra of St. Luke’s. See our Concert Listings for details.

As part of their 2021 Gospel Meets Symphony programming, the Akron Symphony has released a series of videos featuring six spirituals arranged and orchestrated by William Grant Still. These works, which are excerpted from Still’s Spirituals: A Medley, “may be receiving their first-ever recordings with this project,” the Orchestra writes. Watch here, and note that some of these pieces will grace the debut of the ASO’s Outside Voices Concert Series on June 19.

In the podcasting arena, the latest episode of Symphosium features ASO percussionist Matt Dudack, who discusses his career in music, the history (and his love) of the steel drum, the best drummers of all time, and more. Listen here.

And the Canton Symphony has announced the return of its Summer Serenades in collaboration with Stark Parks. The series features several different combinations of chamber music: brass quintet (July 1 and 15), string quartet (July 8 and 22), woodwind quintet (July 29 and August 19), and flute/harp duet (August 12).

The CSO’s summer season also includes two orchestra concerts at Jackson Amphitheatre: “Broadway Hits” (July 18) and “A Night at the Movies” (August 12). More details about all those summer concerts here.

In a conversation last month with bassoonist Barrick Stees, he shared the opinion that woodwind quintets have really come into their own in the 20th and 21st centuries, as composers such as Ligeti and Barber “featured the personalities of the different instruments, as opposed to making them subjugate those personalities to form a homogenous sound.”

Another composer to toss into that group is Carl Nielsen, born on this date in 1865, whose well-known quintet was influenced by the individual members of the Copenhagen Wind Quintet. Having overheard the group rehearsing one evening, Nielsen noted how each player’s personality came through in their playing, and decided to picture them in music, particularly in a variations movement.

Variation 5, a duet between clarinet and bassoon, is especially colorful with its depiction of clarinetist Aage Oxenvad’s hot temper. According to an article by the group’s oboist, Sven Christian Felumb, Nielsen’s instructions here were to “play like a married couple who are arguing…” Perhaps it makes sense that bassoon (Knud Lassen) gets quiet at the end, because Felumb describes Lassen as easygoing and sophisticated — something that perhaps you can hear in the bassoon melody that opens the first movement.

Listen to Variation 5 (and the whole piece) here in a live performance by the Berlin Philharmonic Wind Quintet.

When Nielsen passed in 1931, his popularity had not yet reached the international heights at which it lies today. On his 60th birthday in 1925, even as he was celebrated in Scandinavia, he wrote:

If I could live my life again, I would chase any thoughts of Art out of my head and be apprenticed to a merchant or pursue some other useful trade the results of which could be visible in the end … What use is it to me that the whole world acknowledges me, but hurries away and leaves me alone with my wares until everything breaks down and I discover to my disgrace that I have lived as a foolish dreamer and believed that the more I worked and exerted myself in my art, the better position I would achieve. No, it is no enviable fate to be an artist.

It’s poignant to imagine the scene of his funeral, where the Copenhagen Quintet gathered to pay tribute in the form of the chorale from the last movement of the Wind Quintet.

Read more about that work and the Copenhagen Quintet in Chapter IV of a doctoral dissertation by Marcia L. Spence.

This year the majority of the concerts are being held at a single location, the magnificent Grove Amphitheatre in Mayfield. Although the venue has no permanent seating, lawn chairs and blankets are the perfect solution. Picnics are encouraged and the responsible consumption of alcohol is permitted. Think Blossom Music Center on a smaller scale and you’ll get the picture. END_OF_DOCUMENT_TOKEN_TO_BE_REPLACED

The series opener, “Legends,” celebrated the return of in-person concerts with music by Antonín Dvořák, Enrique Granados, Paul Wiancko, and Franz Schubert. The musicians displayed the wide range of expression and color, enchanting communication, and technical brilliance that chamber music can provide. END_OF_DOCUMENT_TOKEN_TO_BE_REPLACED

Music director Franz Welser-Möst set the stage in his introductory video remarks, describing the Berg era as “the ‘Roaring 20s’ aftershock of World War I, a blooming of musical styles never experienced before or since.” END_OF_DOCUMENT_TOKEN_TO_BE_REPLACED

Aside from that, the beautifully curated program primarily features captivating performances of solo works that are presented in a logical progression of sound and temperament. END_OF_DOCUMENT_TOKEN_TO_BE_REPLACED

END_OF_DOCUMENT_TOKEN_TO_BE_REPLACED

Henderson began the evening with his own arrangements of three movements from J.S. Bach’s Suite No. 4 for solo cello. The Prelude features a series of descending patterns interspersed with virtuosic passages, and while these passages effectively highlighted Henderson’s technical skills, he also demonstrated dramatic expertise by playing each descending pattern with different nuances of emotion. The Sarabande, with its poise and stately pace, was juxtaposed beautifully with a lively Bourrée, where notes flurried in quick succession, but Henderson never sacrificed precise articulation for musical momentum.  END_OF_DOCUMENT_TOKEN_TO_BE_REPLACED