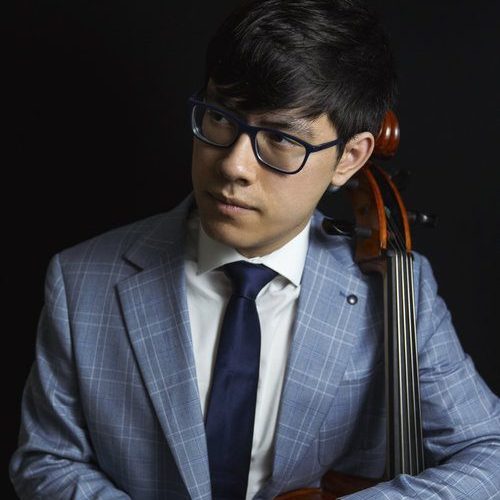 Bearing a name that reflects his Bulgarian-Chinese heritage, 21-year-old cellist Zlatomir Fung scored a big victory in the 2019 XVI International Tchaikovsky Competition, becoming the first American in forty years to win Gold — and the youngest contestant ever to earn that distinction in the Russian contest.

Fung will make his first visit to Cleveland this week to play six works in the first four concerts of ChamberFest Cleveland. “I’ve worked with Roman Rabinovich and New York’s Jupiter Symphony Chamber Players. We’d been hoping for a few years that I could come, and now it’s finally panned out,” he said in an early morning phone call on Tuesday before heading off to a rehearsal.

Fung’s looking forward to an intense few days. “It’s great after the pandemic, when we were all sitting around watching the clock and waiting for the sun to set. Here, every hour is filled with something fascinating and different. All the music I’m playing is really rich, and there are some pieces I hadn’t known about before.”

Those new-to-the-cellist works include the Dohnányi Second Quartet and the Zemlinsky Trio. “We had the first rehearsal of the Trio yesterday, which was the first time I worked with Franklin Cohen. It was amazing. It’s apparent that he’s an incredibly intuitive musician with a great sense of structure, as well as an absolute virtuoso. Frank and Roman had performed the Zemlinsky many years ago, so it was a new piece for each of us in different ways.”

On the other hand, Paul Wiancko’s American Haiku is already in Fung’s fingers. “Paul’s an acquaintance of mine and we’ve played cello duos together. He’s a gifted composer and player, and a really nice guy. There are three movements in the Haiku corresponding to the three lines of the poetic form, and the piece is an exploration of Paul’s Japanese American identity.”

The Perkinson solo piece was a recent discovery. “A fellow cellist sent it to me last year when it was having a resurgence in popularity. It’s subtitled “Black Folk Song Suite” and has been described as giving voice and expression to the African American experience. From a musical perspective, the piece blends a folk aesthetic with a really sophisticated sense of structure and counterpoint.

“The first movement, ‘Fuguing Tune,’ is full of syncopations, jazzy riffs, and daring harmonies. In the third, he turns the cello into a double bass with a cosmic ostinato pulse that keeps rocking on. And the last is a moto perpetuo that’s technically challenging, but is supposed to sound off the cuff.”

Inevitably, I asked Zlatomir Fung whether he took up any new projects during the pandemic. “I started learning programming, because my dad’s a programmer, but I hit a bit of a wall. I’m a big fan of chess, which became really popular during the second part of the pandemic because of the TV show The Queen’s Gambit. And I got into blitz chess, which is exciting, but addictive like a video game in that it relies entirely on your intuition and reflexes. But still, it has that landscape of intellectual and geometrical beauty that makes chess attractive.”

Supported by engagingly, yet simple staging by Cara Consilvio, a well-prepared cast of singers told the archetypal story of Cinderella with charm and flair. Framing the production was  a sparse but colorful set and wonderful lighting by Dave Brooks. END_OF_DOCUMENT_TOKEN_TO_BE_REPLACED

END_OF_DOCUMENT_TOKEN_TO_BE_REPLACED

The music isn’t easy to play, either. Over the course of two hours, all of the musicians brought fantastic focus to the unrelenting tricky rhythms and countless layers of parts, all of which require a high level of individual responsibility. Even in the moments of calm, the accompaniment remains perpetually unsettled. Adams — who made a sprightly presence on the podium — combines minimalist, repeating motives in gradual layers, which eventually become so dense they overwhelm the senses. Lisa Wong deserves special mention for her thorough preparation of the Cleveland Orchestra Chorus, as does Jennifer Rozsa for the Children’s Chorus, which made a brief but memorable appearance in the last few minutes. END_OF_DOCUMENT_TOKEN_TO_BE_REPLACED