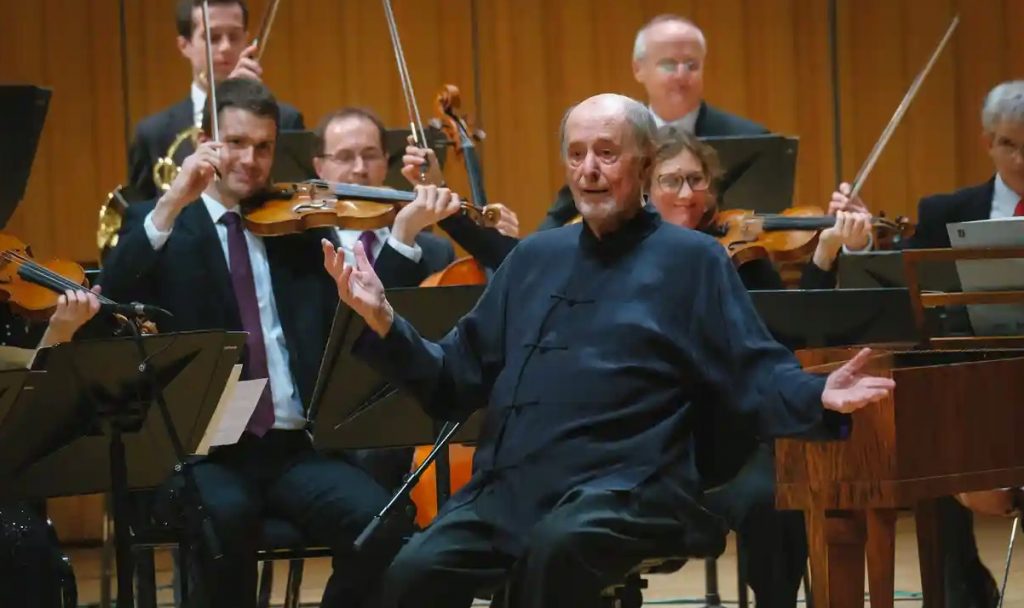 British historical performance pioneer Sir Roger Norrington (pictured) is retiring after leading a concert with the Northern Sinfonia. The Guardian interviews him here in connection with that landmark event.

M.U.S.i.C. | Stars in the Classics will present “An Eclectic Musical Celebration” on Saturday, December 4 at 4:00 pm at the Church of the Western Reserve in Pepper Pike, featuring music by Mozart, Saint-Saëns, Rota, Still, Schnittke, Strauss, Tchaikovsky, Puccini, and Vivaldi. Download a flyer here.

Joplin is most famous for single-handedly inventing ragtime — the syncopated American genre revived by William Bolcom and William Albright, who introduced the young musicologist Joshua Rifin to Joplin’s music in 1968, and further popularized it in the movie The Sting. Joplin wrote two operas as well. The materials for A Guest of Honor have been lost, probably seized by a rooming house owner in lieu of rent during a tour in 1904, but Treemonisha enjoyed a full production by Houston Grand Opera in May, 1975. Watch a video (with subtitles in Portuguese!) here.

Returning to ragtime: Joplin made seven pianola rolls in 1916 including his most famous piece, the Maple Leaf Rag. In 1970, Rifkin’s Nonesuch recording of Joplin piano rags was the label’s first to sell a million copies.

Schnittke adopted what he called his polystylistic technique in works like his remarkable Concerto Grosso No. 1, performed live in Moscow in 2004 by Gidon Kremer, Tatiana Grindenko and Kremerata Baltica.

Logan joined the Oberlin Conservatory Faculty and founded the Oberlin Jazz Ensemble in 1973, later developing a jazz curriculum for the school, which adopted admissions standards for jazz students in 1991. Watch a shaky cell phone video of Logan speaking at the dedication of the Kohl Jazz Studies Building in 2010 (he died later that year).

And listen to a February, 1991 recording of Logan’s Roots, Branches, Shapes and Shades (of Green), commissioned by the Cleveland Chamber Symphony, composed for pianist Neal Creque, and first performed under the direction of Edwin London in February, 1991.

Music director and conductor Daniel Meyer built his playlist around Cleveland themes and scenes. “Exploration CLE” made use of engaging selections from the classical canon and beyond that celebrated “what makes Cleveland so special.” Happily, he and his musicians avoided constructing a visual slide show, choosing to let the music speak for itself. END_OF_DOCUMENT_TOKEN_TO_BE_REPLACED

You could see the relationship at work on a practical level. Repertoire for two players at the same piano requires a certain choreography. There’s just one of each pedal to share, and the hand crossings left and right — which can be so fun to watch a soloist pull off — get more complicated when another person’s involved. At times, Pompa-Baldi drew a hand away from the keyboard and into his body, making room for Friscioni, and at the close of a few delicate phrases, the two were crouched together over the same final notes at one end of the instrument. END_OF_DOCUMENT_TOKEN_TO_BE_REPLACED

The signature sounds of these famous film scores are not so much John Williams’ invention as allusions to other classical pieces. The foreboding half-step from Jaws, growing more and more furious in the cellos and basses, shares something with Dvořák’s “New World” Symphony and Bartok’s Miraculous Mandarin. END_OF_DOCUMENT_TOKEN_TO_BE_REPLACED