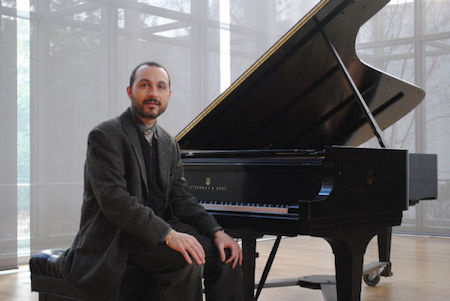 There are many things to talk about this weekend, including two memorial events, the reappearances on the schedule of an orchestra and a pianist after long absences, a delayed Mardi Gras celebration, a rare program starring the cimbalom, and two concerts featuring single reed soloists. And one performance that isn’t going to happen thanks to visa snags, although the artist is sending his electrons for a master class.

Memorial services at Trinity Cathedral on Saturday, April 22 will celebrate the lives and legacy of organist and writer Timothy Robson (10 am) and Arts Renaissance Tremont founder Christine Haff-Paluck (3 pm). Robson will be remembered by friends and colleagues in an Episcopal funeral service, and Haff-Paluck will be memorialized by a long list of performers including Shuai Wang, Jinjoo Cho, Hyunsoo Kim, Burning River Brass, Cleveland Chamber Choir and Jeffrey Peterson, the Cleveland Jazz Orchestra, the Cavani and Amici String Quartets, North Coast Winds, and Dianna Richardson and students from the Cleveland School of the Arts. Read a preview here. Then, in descending order of size, here are orchestra concerts, jazz performances, chamber music, and solo recitals you can enjoy all over town.

ORCHESTRA: Cleveland Chamber Symphony re-emerges in a collaboration with Verb Ballets and Cleveland School of the Arts led by Steven Smith on Friday at 7:30 pm at Baldwin Wallace. The Cleveland Orchestra completes its run of performances at Severance Music Center on Friday and Saturday with Klaus Mäkelä conducting, and violinist Nikolaj Szeps-Znaider soloing in the Sibelius Concerto. (Read a preview here.) Then the Cleveland Women’s Orchestra led by John Thomas Dodson takes over at Severance on Sunday at 2:30 pm for a concert featuring pianist Antonio Pompa-Baldi (pictured) in the Cleveland premiere of Luca Moscardi’s Concertino, and in Cecile Chaminade’s Concertstück.

JAZZ: Two Fat Tuesdays in one year? Cleveland Jazz Orchestra had to cancel its plans for the official date in 2022, but offers “Mardi Gras Gets the Gospel” at the Maltz on Saturday evening starring vocalist Adrianna Miller and a newly created gospel choir in music by Duke Ellington and others. And guitarist Stephane Wrembel, “the living face of modern Gypsy jazz” (think Django Reinhardt), brings his band with guest violinist Daisy Castro to the Bop Stop for two shows on Sunday at 6 and 8. (Read a preview here.)

CHAMBER MUSIC: Saxophonist James Umble plays a solo recital with pianist Diane Yazvac on Friday evening at Willoughby’s Fine Arts Association, and cimbalom virtuoso Chester Englander is the featured soloist with No Exit on Friday evening in Ludwig Recital Hall at Kent State. CityMusic Cleveland has commissioned and will feature the premiere of Margaret Brouwer’s Clarinet Quintet at St. Stanislaus on Saturday evening, along with other works by Mozart and Florence Price scored for clarinet plus string quartet featuring CityMusic clarinetist Ellen Breakfield-Glick. (Read a preview here.)

SOLO RECITALS: After a gap of some 25 years, pianist Evgeny Kissin returns to Severance for J.S. Bach, Mozart, Beethoven, and many Chopin Mazurkas on Sunday evening. (Read a preview here.) And that partial cancellation? No visa for Polish organist Marek Kudlicki means no recital at Holy Trinity Lutheran in Akron on Sunday afternoon, but he’ll still hold an online master class on Saturday through the wonders of Zoom.

“Sunrise at the Lake. The tenor is walking on the beach. Everything is beautiful until he comes to the algae. At first he ignores it, but finally must come to terms with his feelings of revulsion for it. He hurries back to the good area of the beach where he finds the children and the others. They sing about how beautiful it is this morning, and their hope that the lake will remain this way. They resolve to clean up the lake.”

According to some sources, “The Bard of Avon,” William Shakespeare, was born on April 23, 1564, and it’s a fact that he died on the same date in 1616. Setting aside the contentious question of whether or not the son of a glove maker from Stratford-Upon-Avon actually authored the plays and poems attributed to him, we’ll honor both his arrival and departure dates with a setting of words from The Merchant of Venice, Act 5, Scene 1. By moonlight, Lorenzo and Jessica are discussing music both earthly and celestial, and Lorenzo comes to the conclusion that

The man that hath no music in himself,
Nor is not mov’d with concord of sweet sounds,
Is fit for treasons, stratagems and spoils;
The motions of his spirit are dull as night
And his affections dark as Erebus:
Let no such man be trusted.

Ralph Vaughan Williams wrote A Serenade to Music to mark the 50th anniversary of the first concert conducted by Sir Henry Wood, who led the popular “Proms” (Promenade Concerts) for 50 years. The original work featured sixteen soloists chosen by the conductor and the composer, who at times sing as a choir. Members of the London Symphony, the BBC Symphony, and the London Philharmonic joined together for the first performance at the Royal Albert Hall on October 5, 1938 (listen to the first recording here.)

Here, in one album, are three versions of the piece from Vaughan Williams’ pen: for soloists (with the London Philharmonic conducted by Sir Adrian Boult), for chorus and orchestra (with the Royal Philharmonic Choir and Orchestra, led by Vernon Handley), and for orchestra alone (with the Northern Sinfonia under Richard Hickox).

Chicago inventor Laurens Hammond filed a patent on April 24, 1934 for a new electric organ, an event that produced consequences he couldn’t have imagined at the time. The Hammond Organ was meant to provide a less expensive option than the pipe organ for churches, but especially in its eventual configuration as Hammond’s Model B-3 (introduced in 1954 and outfitted with rotating Leslie speakers and harmonic percussion effects), the instrument was enthusiastically embraced by jazz and gospel musicians.

Ethel Smith was an early adopter — she advertised herself as “The Queen of the Hammond Organ” and became famous for her arrangements of tunes like Tico Tico (featured in the 1944 film Bathing Beauty).

Other artists like Booker T. Jones (appearing here on an NPR Tiny Desk Concert), Eddie Baccus (performing here on the 2011 Tri-C Organ Summit), and Joey DeFrancesco (featured here at BluJazz in Akron) added to the B-3 legacy.

The newest B-3 artist to appear on the Cleveland scene was still in his teens when he performed at Tri-C JazzFest in 2019. Listen to the phenomenal Matthew Whitaker performing with his combo at a jazz festival in Bremen, Germany.

END_OF_DOCUMENT_TOKEN_TO_BE_REPLACED

Rodgers & Hammerstein’s Cinderella was originally produced for television in 1957 — seven years after the animated Disney film was released — and starred Julie Andrews. According to the Rodgers & Hammerstein website, it was viewed by over 100 million people. END_OF_DOCUMENT_TOKEN_TO_BE_REPLACED

The story line has its origin in an 1855 play and an 1842 farce that Thornton Wilder mined for his 1938 play The Merchant of Yonkers. When that turned out to be a flop, in 1954 Wilder made the crucial decision to re-center the show around the character of the legendary marriage broker Dolly Gallagher Levi and renamed it The Matchmaker. END_OF_DOCUMENT_TOKEN_TO_BE_REPLACED

The Dodero Center for the Performing Arts at the Gilmore Academy in Gates Mills is one feature of an impressive campus. The auditorium is shallow, the stage is deep, and the ensemble played without a shell. Throughout the program, the sound, especially in instruments’ lower registers, tended to disappear. END_OF_DOCUMENT_TOKEN_TO_BE_REPLACED