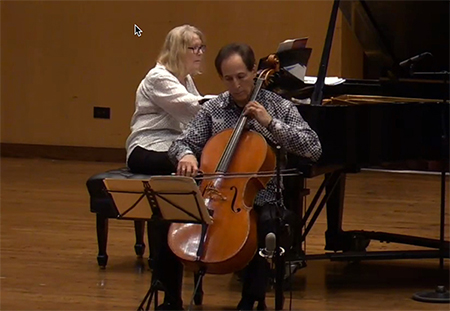 On Saturday afternoon, Kent Blossom Virtual Music Festival adds an extra event featuring Cleveland Orchestra members and friends, Piano Cleveland moves into the 3rd session of the First Round (No. 4 to follow on Sunday), Cleveland Classical Guitar Society announces its International Series, and WCLV remembers George Szell near the 50th anniversary of his death with a rebroadcast of a Blossom Concert from 1970 led by Pierre Boulez during which The Cleveland Orchestra’s music director for 24 years passed away.

And ClevelandClassical.com readers can access the world premiere of David Lang’s in nature by The Crossing for free by clicking through the special link in the Concert Listings (otherwise, it’ll cost you $7!)

And MET Opera fans can tune in to free streams of Verdi’s Ernani and Wagner’s Die Walküre. See the Concert Listings for details.

The Music Settlement has now obtained permits for temporary expanded service, and invites patrons for a socially distanced outdoor beverage on Saturday from 5 to 8 pm. No live music, and no kitchen, but you’re welcome to bring your own food. Masks are required, and beverages must be consumed at tables.

The President of Turkey has turned Hagia Sophia, the great Byzantine cathedral in Istanbul that later became a mosque and then a museum, back into a mosque again, a move that discourages tourism and frustrates acoustical scientists’ efforts to capture its spectacular acoustic (it’s perfect for Byzantine chant). Read the New York Times article here.

There are no special Cleveland connections to celebrate for August 1 and 2, but how about a little quiz that references classical music figures who died on the first two days of August?

English pianist John Ogdon died on August 1 in 1952. Which of these composers did he especially promote? a) Alkan. b) Reinecke. c) Busoni. c) Scriabin.

Russian pianist Svyatoslav Richter died of a heart attack on August 1, 1997. True or false: In 1952, Richter was invited to play Franz Liszt in a film based on the life of Tchaikovsky.

Italian opera composer Pietro Mascagni took his final curtain call on August 2, 1945. He’s best known for his one-act verismo drama Cavalliera rusticana. Which of the following scores did he not compose? a) Silvano. b) Zanetto. c) Amica. d) Arlecchino.

And Mexican conductor and composer Carlos Chávez left us on August 2, 1978 at the age of 79. What famous conductor did he fill in for in 1938 during his four years in New York City? a) Leopold Stokowski. b) Arturo Toscanini. c) Bruno Walter. d) Thomas Schippers.

END_OF_DOCUMENT_TOKEN_TO_BE_REPLACED

Composer John Harbison has done it all. His numerous awards include a MacArthur Fellowship and a Pulitzer Prize. He has written works for many of America’s leading musical organizations and has served as composer in residence with the Pittsburgh Symphony and the Los Angeles Philharmonic. His catalogue includes three operas, seven symphonies, twelve concerti, a ballet, six string quartets, numerous chamber works, and a large body of sacred music. On her latest CD, Late Air — Music by John Harbison, soprano and Oberlin voice professor Kendra Colton reminds us that the celebrated composer has a special talent for writing art songs — she also proves herself to be a sensitive interpreter of them. END_OF_DOCUMENT_TOKEN_TO_BE_REPLACED

END_OF_DOCUMENT_TOKEN_TO_BE_REPLACED

We begin with the world premiere recording of Okeanos, Bernd Richard Deutsch’s concerto for organ and orchestra, featuring Paul Jacobs as soloist. The title refers not only to the Titan of Greek mythology, but also “to an idea of immense (and sometimes unfathomable) greatness and breadth, which conjures up in my mind the thought of the organ,” as Deutsch writes in his notes. END_OF_DOCUMENT_TOKEN_TO_BE_REPLACED