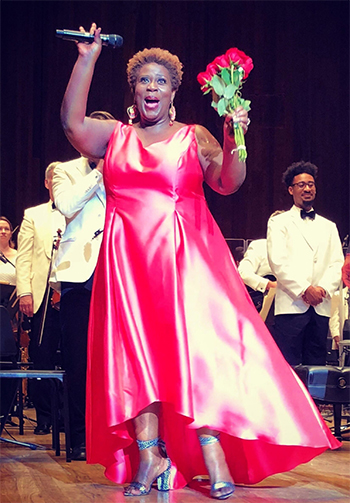 Ohio Light Opera is busy this weekend, with afternoon performances of Trial by Jury and The Fantasticks as well as an evening edition of “The Musical Magic of OLO.” All planned for the great outdoors, but with rain plans at the ready.

Online piano events include the beginning of the second round of the Cleveland International Piano Competition and the continuation of the Oberlin-Como Piano Festival (with an interview featuring conductor Robert Spano).

Encore Chamber Music Institute hosts its Blooming Artist Marathon online all afternoon and into the evening on Saturday.

And on the Blossom stage Sunday evening, vocalist Capathia Jenkins (pictured) opens that mythical volume, “The Great American Songbook,” joining The Cleveland Orchestra for American standards by Gershwin, Ellington, and others.

Details in our Concert Listings

A year ago today, July 17, we highlighted the birth in 1935 in Ames, Iowa of American composer Peter Schickele (whose alter ego was the fictional P.D.Q. Bach), and the death of French composer, conductor, and organist Gabriel Pierné in Ploujean, Brittany in 1937.

Tovey, who held a professorship in music at the University of Edinburgh from 1914, is best known for his scholarly writings about music — his Essays in Musical Analysis were published by Oxford in six volumes from 1935 to 1939. But he contributed some impressive works to the British canon of orchestral and chamber works as well. Based on those pieces and on his scholarly editions of Bach’s Well-Tempered Clavier and The Art of Fugue, Elgar is said to have recommended him for a knighthood in 1935.

Listen here to Tovey’s 1913 Symphony in D, Op. 32 performed by the Malmö Opera Orchestra under George Vass, and here to a scratchy archive recording by Sir Adrian Boult and the BBC Symphony of his Cello Concerto, Op. 40, dedicated to Pablo Casals, who is the soloist.

As part of his editorial work on Bach’s great fugal textbook, Tovey wrote a completion to Contrapunctus XVI, which he plays here on the piano.

And for a sample of Tovey’s chamber music, listen here and follow along with the score to his Op. 1 Piano Trio, which he dedicated to his mentor, Sir Hubert Parry.

Rosalyn Tureck’s early and lifelong advocacy of the music of Johann Sebastian Bach survived her training at the Juilliard School which she entered at the age of 16. She found the faculty unencouraging about her favorite composer, a situation that she also encountered elsewhere. In his New York Times obituary, Alan Kozin wrote,

When she entered the Naumburg Competition, she made it to the finals and presented an all-Bach program as her closing recital. As she told the story years later, the members of the jury said they could not give her the award “because they were sure that nobody could make a career in Bach.”

Well, she did, as you can learn from the video Rosalyn Tureck: Remembering a Legend, produced for what would have been her 100th birthday in 2014, and featuring a number of interviews with those who knew her best, including former Cleveland Orchestra assistant conductor Michael Charry. Watch here.

There’s also a video of her all-Bach recital in the Great Hall of the Philharmonic in St. Petersburg, Russia, in 1995 that includes the Capriccio on the Departure of a Beloved Brother, and the Chromatic Fantasy and Fugue.

END_OF_DOCUMENT_TOKEN_TO_BE_REPLACED

What was that strange din coming over the live feed from Ludwig Recital Hall on Friday evening, July 23, as the Miami String Quartet filed onstage to play the third faculty recital of the Kent Blossom Music Festival? Accustomed as we were during the pandemic ban on live audiences to hearing the sound of no hands clapping, it was both startling and thrilling to witness a large crowd putting their hands together to welcome one of the Festival’s perennial favorites back for an in-person performance. END_OF_DOCUMENT_TOKEN_TO_BE_REPLACED

Practical reasons aside, there aren’t many ensembles who can put together an all-Mozart evening as elegantly as The Cleveland Orchestra. END_OF_DOCUMENT_TOKEN_TO_BE_REPLACED