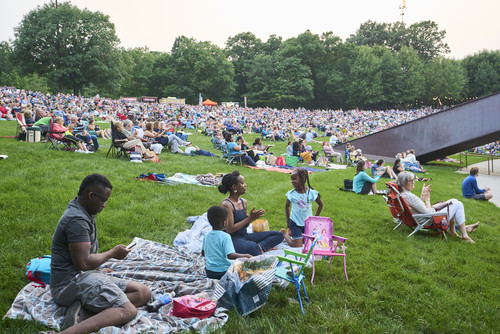 Saturday and Sunday provide piano fans with their last opportunity to get to know the 26 contestants in the Cleveland International Piano Competition — after Sunday’s Round 2, Session 6 performances, the field will be whittled down to eight hopefuls as the competition moves into the Semifinal, Chamber Music, and Concerto Rounds. The early round sessions have been pre-recorded from locations around the globe, and you can tune in on Saturday and Sunday at 2:00 pm to listen in for free (or catch them later, on-demand).

Alas for procrastinators, Saturday’s Ohio Light Opera performance of Trial by Jury and Stars in the Classics’ garden concert are both sold out. But on Sunday evening at 7:00 pm, guest conductor Rafael Payare and violinist Stefan Jackiw will appear with The Cleveland Orchestra at Blossom in music by Prokofiev and Dvořák, and lawn and pavilion tickets are available here. (Photo by Roger Mastroianni from last weekend, courtesy of The Cleveland Orchestra.)

Musical America editor Susan Elliott holds a one-on-one conversation with Harold Brown, who took on the position of chief diversity and inclusion officer for the Cincinnati Symphony last March with the mandate “to effect change and broaden the institution’s personnel profile to better reflect its diverse community.” Watch here.

We’ll start by mentioning the birth of Swiss-American composer Ernest Bloch in Geneva on July 24, 1880, who served as the first president of the Cleveland Institute of Music from 1920-1925.

Then we’ll move on to celebrate the anniversaries of two of the great vocalists of the 20th century: soprano Adele Addison, born in New York on July 24, 1925, and contralto Maureen Forrester, born (as Kathleen Stewart) in Montréal on July 25, 1930.

Although trained in opera, Addison appeared most frequently in the 1950s and 60s in orchestral concerts and recitals. Listen here to her performance in the solo quartet of the finale of Beethoven’s Ninth Symphony with The Cleveland Orchestra under George Szell in April of 1961 (bonus: Richard Lewis is the tenor).

Addison’s supple voice was well suited to Baroque music, and she became a favorite of Leonard Bernstein. Listen here to Handel’s “Come unto him” from Messiah with Bernstein and the New York Philharmonic in 1956.

Among her other credits, Addison’s voice was dubbed in for Dorothy Dandridges’ in the 1959 film version of Porgy and Bess, and she was soprano soloist for the world premiere of Poulenc’s Gloria with Charles Munch and the Boston Symphony in 1961. Listen to “Bess, you is my woman” here (the voice of Robert McFerrin — father of Bobby — is also dubbed in, this time for Sidney Poitier).

As a young singer in Canada, Forrester made strong impressions on CBC talent shows, and received her big break in New York when Bruno Walter chose her as one of the soloists for Mahler’s Second Symphony. She also sang in the conductor’s farewell performances with the New York Philharmonic in 1957.

A true contralto, Forrester’s vocal gifts come to the fore in this 1957 performance of Brahms’ Alto Rhapsody with the Orchestra de Radio-Canada, led by Igor Markevich. But her singing could also be light and lively, as in this duet from J.S. Bach’s Cantata BWV 78 with soprano Lois Marshall and pianist Yehudi Wyner from a 1974 recital at Mt. Orford, Québec. “Wir eilen mit Schwachen doch emsigen Schritten” translates as “We run with eager but faltering footsteps,” an image that the composer captures brilliantly.

END_OF_DOCUMENT_TOKEN_TO_BE_REPLACED

Concerts cancelled in 2020 may have put a brief gap in Ling’s record with the Orchestra (a program every season since 1984-1985), but the ensemble’s former resident conductor more than made up for it Sunday with a performance both commanding and personal. END_OF_DOCUMENT_TOKEN_TO_BE_REPLACED