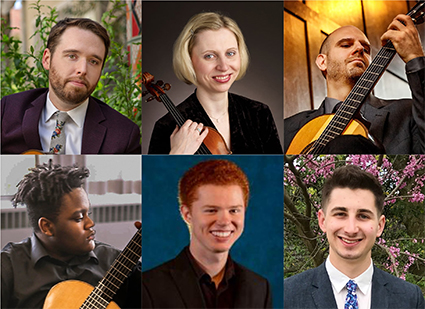 The Cleveland Classical Guitar Society always launches its new season with a Showcase Concert, but this time around, there will be no audience present in Silver Hall at the Maltz Performing Arts Center for the Saturday evening event. Register for a free live stream invitation instead.

On Sunday, Apollo’s Fire holds its first online benefit, “Go For Baroque,” link to be supplied with a donation, cellist Simon Housner plays a solo recital on the Sacred Heart Series in Oberlin, guest carillonneur Keiran Cantilena plays a recital on the McGaffin Carillon in University Circle, and pianist Daniel Shapiro opens the Music from the Western Reserve series — as well as launching his season-long expedition through all 32 of Beethoven’s Piano Sonatas — with a virtual recital pre-recorded from Christ Church in Hudson. Details in the Concert Listings.

It’s not about music, but still thought-provoking. The Guardian commissioned GPT-3, “OpenAI’s powerful new language generator, to write an essay for us from scratch. The assignment? To convince us robots come in peace.” Read Robot Wrote This Article here.

On September 12, 1764, French composer and music theorist Jean Philippe Rameau died in Paris at the age of 80. It was only after he turned 50 that he began writing the operas that have been the main source of his place in history. Watch a 2003 video of his Les Boréades performed by Les Arts Florissants at the Opéra National de Paris in 2003, and a concert of suites from his dramatic works played by Jordi Savall and Le Concert des Nations at Versailles in 2011.

And Russian composer Dimitri Shostakovich was born on September 12, 1906 (Old Style dating) in St. Petersburg. The Cleveland Orchestra has played his symphonies many times over the decades, but let’s suggest two historic recordings led by Artur Rodzinski: Symphony No. 1 (undated in this posting), and No. 5 (recorded February 22, 1942 in Severance Hall).

On September 13, 1819, German pianist, composer, and teacher Clara Wieck was born in Leipzig, later to marry Robert Schumann, whose works eclipsed her own. Watch a recent concert by the Dana Piano Trio that featured her own piano trio.

Also born on September 13, but in 1917 in Cleveland, composer Robert Ward was most celebrated for his Pulitzer Prize-winning 1961 opera The Crucible, based on the play by Arthur Miller. In 2011, at the age of 93, Ward journeyed to Sarasota Opera to hear a production of the work, and talked about it in a video interview.

And on September 13, 1977, conductor Leopold Stokowski died at the age of 95 in the English village of Nether Wallop. Watch a BBC4 video documentary of his long career, and enjoy a recording of his own transcriptions of Mussorgsky’s Pictures at an Exhibition played by The Cleveland Orchestra under the late Oliver Knussen.

Joining a long list of arrangers, Parker Ramsay has now transcribed the Variations for the modern pedal harp, an instrument for which he holds a master’s degree from Juilliard, in addition to a degree in history from Cambridge University, plus a master’s in historical performance (organ and harpsichord) and an artist diploma (organ) from Oberlin. END_OF_DOCUMENT_TOKEN_TO_BE_REPLACED

As organizations gingerly take steps to open up for business, it’s refreshing to have new content to listen to and write about after a solid six months of archival footage. END_OF_DOCUMENT_TOKEN_TO_BE_REPLACED

END_OF_DOCUMENT_TOKEN_TO_BE_REPLACED

Over the past few years, Brian Giebler has visited Northeast Ohio in settings both orchestral and choral, and with repertoire as diverse as Stravinsky, Bach, and the local premiere of a new work. In his impressive solo recording debut a lad’s love, released on Bridge Records, the New York City-based tenor turns his focus to British songs from the first half of the 20th century — a mix of cycles and individual works — and tops off the playlist with a touch of the modern. END_OF_DOCUMENT_TOKEN_TO_BE_REPLACED

To steal a phrase from the third-century Greek philosopher Sextus Empiricus, the mills of the gods grind slowly, but they grind exceedingly fine. The same goes for Deutsche Grammophon. It’s been a dozen years since they were recorded in Hamburg in 2009, but the German company has now issued fifteen Rachmaninoff piano pieces magnificently and poetically played by Sergei Babayan. END_OF_DOCUMENT_TOKEN_TO_BE_REPLACED

END_OF_DOCUMENT_TOKEN_TO_BE_REPLACED

After considering all its options, Cleveland’s period ensemble Les Délices decided to fully embrace the idea of creating pre-recorded “shows” in the place of live, in-person performances this season. END_OF_DOCUMENT_TOKEN_TO_BE_REPLACED