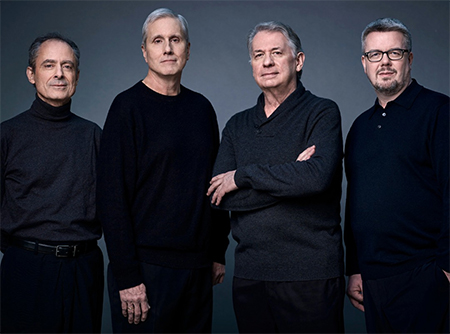 . Weekend concerts feature music in its many varieties

Classical music concerts this weekend promise a variety of options.

Also at 7:00 pm, Trobár Medieval presents “Robin & Marion,” in which a beautiful and savvy shepherdess, her dopey but devoted shepherd paramour, and their village friends encounter a villainous knight. City Church, Cleveland Heights. Free but $20 donation suggested. The program is repeated on Saturday at 3:00 pm.

There’s lots to choose from on Sunday.

Also at 4:00 pm the Sounds of St. James presents the debut of The Cleveland Consort of Voices, Steven Plank, director, at St. James Catholic Church in Lakewood. Freewill offering.

A two-week calendar of events can be found on the Clevelandclassical.com Concert Listings page.

The Emerson Quartet (pictured above, l. to r., Eugene Drucker, Lawrence Dutton, Philip Setzer and Paul Watkins) have made this announcement on Facebook:

“After more than four decades of performing together, it is with a mixture of anticipation and nostalgia that we announce the dates of our final season.

“We hope to see you at a concert before the end! For a full schedule of performance dates, visit this link.”

The culmination of Queen Elizabeth II’s 70-year reign invites listening to music that summarizes that Royal era and a reflection on the impact that royal funerals have made on the choice and traditions of ceremonial music.

“Since 1603, much of the royal funeral’s format has stayed the same, while some aspects shift to reflect the time and the monarch. The result is a striking combination of diverse works that tell both the story of the British monarchy and British music.”

Read Benjamin Poore’s A Queen Elizabeth II Playlist: Music that captures the ambiguity of a 70-year reign in Van Magazine here, and What Music to Expect at Queen Elizabeth II’s Funeral in  The New York Times here.

On September 16, 1966, the Metropolitan Opera opened its doors at the company’s new opera house at Lincoln Center. Fitting for the occasion, the Met kicked off the season with a world premiere — Samuel Barber’s Antony and Cleopatra, starring soprano Leontyne Price. Librettist, designer, and director Franco Zefferelli staged an extravagant production, but technical issues, “gaudy” costuming, and an overall clash between Zeffirelli and Barber’s artistic visions resulted in a rocky start for the Met’s new era.

As one of the first international Black opera stars, Price (pictured left with co-star Justino Díaz) unquestionably felt the pressure from the poor reception. As Peter G. Davis wrote in The New York Times in 2009:

“At the Juilliard performance of the revised version in 1975, a fan asked her what it was like to encounter the opera again. ‘Honey,’ she reportedly replied, ‘when I heard the first notes, I broke out into a cold sweat.’”

While we’re on the topic of opera divas — on this day in 1977, soprano Maria Callas died from a heart attack at the age of 53. Much has already said about Callas, a great singing talent whose regular appearances in the headlines made her a divisive figure. In the New York Times obituary, Dario Soria, the founder of Angel Records, offered this succinct summary of the soprano’s career:

“As a singer, she was responsible for the revival of bel canto. As an actress, she made the stage exciting theater. As a personality, she had the kind of magic that makes news. I think she’ll be remembered as one of the greatest opera singers of all time.”

As any music fan who still listens to music in a physical format might tell you: vinyl is making a comeback, and in a big way. In 2020, vinyl records trumped the annual revenue of CDs for the first time in 34 years.

On September 17, 1931, record company RCA Victor introduced a new product to the consumer market: the long-playing 33 1/3 rpm vinyl. These discs were called Project Transcription, and they represent one of the earliest efforts to bring the long-playing (or LP) record to market.

With the capacity to hold fifteen minutes of music per side, these discs were a prime opportunity for classical music content like symphonies. The first record in this format to be released was Beethoven’s Fifth Symphony, performed by the Philadelphia Orchestra under the direction of Leopold Stokowski.

Despite the economic pressures for hiring large orchestras caused by the Great Depression, RCA Victor continued to record the Philadelphia Orchestra during the 1930s. To save money, many of these sessions were moved to the Victor Camden Church Studio and involved fewer musicians than normal  — the Beethoven, however, was recorded in the Academy of Music in Philadelphia (pictured below) with the full orchestra. Though the audio quality was limited by the current technology, this performance is impressive for how it was recorded in extended first takes. Listen to that recording here.

Other performances from the Philadelphia Orchestra and Stokowski that were recorded directly onto these new 12-inch discs included Schoenberg’s Gurre-Lieder, Sibelius’ Symphony No. 4, and the conductor’s arrangement of Wagner’s Das Rheingold.

Unfortunately, the Project Transcription format only lasted a few years on the market. The economic stress of the Great Depression, combined with various technological issues and complaints, relegated these records into obscurity by 1933.

However, the long-form vinyl trend was just getting started. In 1948, Columbia Records released their own version of the 33 1/3 rpm record with new microgroove technology, leading to an intense rivalry between Columbia and RCA that became known as the “War of the Speeds.” The subsequent innovations paved the way for vinyl’s dominance in the music industry — one which would diminish near the turn of the century, but is now making a roaring comeback.

Photo of Academy of Music (1957) from Library of Congress