“The Stokowski arrangement ties into what I think is so cool about this year’s Festival,” Garner said. “It shows the many faces of Bach in the 21st century. We’re going to hear that transcription from the 1930s, arrangements of Bach’s music for four-hand piano, a Baroque orchestra playing the Mass in b minor, a professional chamber choir singing five of Bach’s motets in a historically-informed way, and then my Motet Choir singing the motets in a more modern style. So you’ll be getting all these different representations of how Bach’s music existed after his death and how it exists today. It’s pretty neat.”

One big departure from past festivals is that student singers won’t be performing the major choral work this time around: instead, Apollo’s Fire and Apollo’s Singers will be in charge of the B-minor Mass. “About a year ago, Jeannette Sorrell called me and said, ‘Oh, no, Dirk. We’re both planning to do the B-Minor Mass on the same weekend next season.’ I just thought, why don’t we put their B-Minor on the Bach Festival program? It makes sense for Apollo’s Fire to play here. They’re one of the best Baroque orchestras in the country, and what a thrill it will be to have them on the Festival. Jeannette has a great roster of soloists, some of whom have performed here before.”

That concert, on Friday, April 12 at 8:00 pm, will feature mezzo-soprano Amanda Crider, tenor Jacob Perry, and baritone Jesse Blumberg. Harvard professor Thomas Forrest Kelly will talk about the work at 7:00 pm. Apollo’s Fire is performing the Mass in three other venues as well (click here for information).

The chamber choir Garner mentioned is another innovation. “The name of the group is BWV, Cleveland’s Bach Choir, a professional ensemble of 16 singers, many of whom have sung at BachFest in the past,” Garner said. “And many are BW alums.” They’ll be performing five of Bach’s motets on Friday at 3:00 pm in Kulas Hall, separated by movements from Bach’s cello suites played by René Schiffer of Apollo’s Fire. “That will tie the whole concert together.”

On Saturday afternoon at 3:00 pm in Gamble Auditorium, the piano duo of Anderson and Roe will play transcriptions of Bach and other Baroque works for piano four hands. “They’re one of the hottest duo piano teams on the circuit,” Garner said. 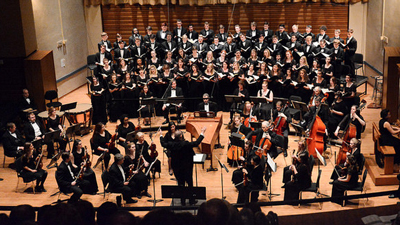 Garner’s student Motet Choir, Festival Chamber Choir and Orchestra, and a set of professional soloists will finish the cycle of Bach motets on Saturday evening at 7:00 pm in Gamble Auditorium, and add two more Bach pieces to the mix. The performance will be streamed live.

“We’ll open the Saturday night concert with Ich lasse dich nicht, which scholars used to think was by Bach’s relative Johann Christoph. Now they’re believing more and more that it was Bach’s first motet because the manuscript looks like a composing score. If that’s true, which I’m hoping it is, we’ll be performing Bach’s first motet followed immediately by Jesu, meine Freude, his last. Also on the program is Christ lag in Todesbanden, BWV 4, his first cantata if the dating is right. It’s stunning. It’s also the first Bach cantata I ever knew thirty years ago. I haven’t performed it in many moons, and I’m looking forward to coming back to it.”

Another rarity will fill out the program: Bach’s one-movement O Jesu Christ, mein lebens Licht, BWV 118. “I think this is one of the best cantatas or motets in the repertoire — whatever you want to call it,” Garner said. The piece exists in two versions, one scored for strings and another for cornetto, two lituii (brass instruments dating back to classical antiquity), and three trombones. “I’ve never been able to perform the wind instrument version,” Garner said — understandably. “Scholars think it was written for a graveside service.”

There are several ancillary Festival events on the schedule this weekend — full details here. One of them, Garner said, is an annual feature that’s often overlooked. “We bring world-class scholars here every year, so we’re happy to expand that list with a lecture by Robert S. Hatten of the University of Texas at Austin. On Saturday at 1:00 pm, he’ll be talking about ‘Musical Meaning in Bach.’”

With all of that going on, I ended our conversation on Sunday wishing Dirk Garner the best for Bach Festival 2019, and hoping that he would have time to grab some rest. He laughed. “I start on Monday at 9 am with twelve hours of rehearsals, going from one thing to the other. I’ll be pretty tired by next Sunday, but it’s so exciting that I won’t even realize it until then.”

Le mariage aux lanternes, the evening’s curtain-raiser, is about Guillot (Bradley Boatright) and Denise (Genevieve Dilan), a couple working on a farm, who are in love with each other, though the clueless Guillot can’t acknowledge it. With the help of his Uncle Matthias (David Burgher), who sends them letters saying that when the Angelus rings, they’ll find what they are looking for beneath a big tree, they eventually find — each other. Meanwhile, two widows, Franchette (Isabel Merat) and Catherine (Kylie Buckham), are also vying for Guillot’s affection (or, more cynically, plotting to acquire his property). END_OF_DOCUMENT_TOKEN_TO_BE_REPLACED