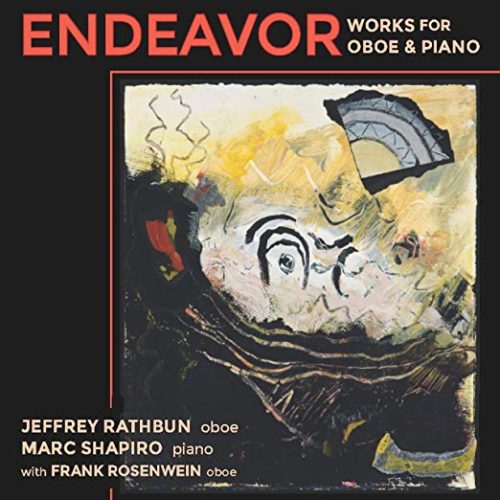 It was the late 1980s when oboist Jeffrey Rathbun and pianist Marc Shapiro first tackled Herbert Howells’ Sonata for Oboe and Piano, written in 1942 but not published for another 45 years.

The pair of colleagues-turned-friends have long wanted to record the piece, and as of this past May, they finally have. Endeavor: Works for Oboe & Piano, released on Albany Records, includes impressive accounts of the Howells Sonata and works by Schumann, Slavický, Stravinsky, and Rathbun himself.

Closing the album is the Howells, a piece which brims with originality while also showing a clear awareness of the past. Rathbun and Shapiro expertly conjure the unsettling atmosphere of the first movement, and they let the music simmer until it suddenly boils over with intense high notes in the oboe.

The reflective second movement shows Shapiro’s lovely touch in the high notes, while the jumpy third movement grins with energy. One passage for the oboe spins around and around with almost cosmic speed, a nightmare for the fingers, but Rathbun tosses it off easily. The conclusion is a pensive Epilogue, beautifully played.

At the other end of the album is Schumann’s Adagio und Allegro, Op. 70, originally for horn and piano. As David Kulma writes in the liner notes, the composer’s alternate parts included one for violin, which Rathbun plays here with some octave adjustments. He and Shapiro show off their smooth legato, engaging rubato, and absolute espressivo. Their surging crescendos leading to the end are perfect Schumann.

Klement Slavický’s four-movement Suite for Oboe and Piano was a recent discovery of Rathbun’s. The duo bring a full dose of mystery to the sinuous melodies of the opening “Pastorale” and perform with a wide spectrum of color throughout. After playing the role of commentator early in the movement, Shapiro takes the reins in one delightful section and begins to goad his duo partner on.

The “Scherzo” is both angular and silly, with surprising leaps that keep you on your toes. The “Triste” pairs deep piano with high oboe, and evolves from a helpless type of sadness to a wounded and angrier kind, then back. Quick chromatic passages provide a jump-start to begin the “Bacchanale Rustico,” which makes its way through an enigmatic middle section to a bustling, riveting conclusion.

Like the Schumann, another work that Rathbun borrows for oboe is Stravinsky’s short Pastorale. It began its life as a vocalise for soprano, written for Rimsky-Korsakov’s daughter Nadya, and later went through a variety of forms, including one for soprano and woodwind quartet. Here Rathbun and Shapiro play the version for violin and piano, which Stravinsky wrote with violinist Samuel Dushkin. It’s utterly graceful music — with a few threatening, chromatic moments — and it’s full of filigree played with the utmost elegance.

Rathbun wrote 4 More Diversions for 2 Oboes for himself and his Cleveland Orchestra colleague Frank Rosenwein, who joins him on the album. (The title is a reference to an earlier oboe duet Rathbun wrote for himself and the late John Mack.) These new divertissements are playful, clever, and captured with style.

“Fanfares” showcases impressive ensemble, from the beginning unison to the ending accelerando. Wonderfully grating multiphonics provide the highlight of “(Un)changing,” while “Vibrating ratios” is a fascinating study in vibrato played at various speeds. The concluding “Speedsters” tells the story of two fast-driving oboists who get pulled over by police (blaring multiphonics). The drivers respond with remorse — for a moment — then speed off and up into the altissimo.

END_OF_DOCUMENT_TOKEN_TO_BE_REPLACED

Supported by engagingly, yet simple staging by Cara Consilvio, a well-prepared cast of singers told the archetypal story of Cinderella with charm and flair. Framing the production was  a sparse but colorful set and wonderful lighting by Dave Brooks. END_OF_DOCUMENT_TOKEN_TO_BE_REPLACED