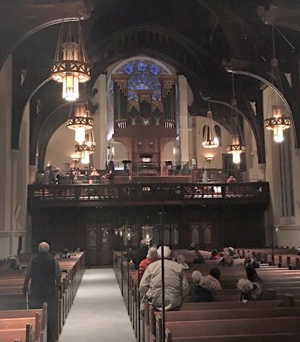 Church music for Lent is usually framed as an incentive to penitence, to trimming down one’s life and meditating on the transience of existence on earth. Particularly powerful during the Baroque period was the service of Tenebrae — performed during Holy Week and accompanied by the extinguishing of candles — for which many composers have left us wonderful settings. At Euclid Avenue’s Church of the Covenant late Sunday afternoon, the diminishing light of a winter day sufficed for the darkening, and the music supplied the intensity.

The principal musical offering at this French Baroque Vespers service consisted of the first two of François Couperin’s three exquisitely melancholy Leçons de Ténèbres of 1714. Sparsely voiced for solo soprano and continuo, these pieces are rich settings of dark texts from the biblical Lamentations of Jeremiah, texts that recount the affliction and bitterness of Jerusalem after the Babylonians’ destruction of the city, and call on the people to return to the Lord.

Soprano Margaret Carpenter Haigh delivered these verses with expressive power, exquisite diction, and a clear, flexible voice that filled the Covenant’s large nave. Carpenter Haigh, who sings with such groups as Quire Cleveland and Apollo’s Fire and is pursuing a doctorate in Historical Performance Practice at Case Western Reserve University, skillfully negotiated the rhythms of Couperin’s lush ornamentation as well as adding flourishes and ornaments of her own. She showed a particular sensitivity to Couperin’s intricate text-settings and fast-changing harmonies.

Carpenter Haigh was accompanied by a continuo duo of organist Nicolas Haigh and cellist David Ellis. The Newberry Organ’s ample organ loft, at the rear of the nave, afforded the singer and continuo players excellent sight lines: the ensemble was beautifully coordinated.

Other baroque instrumentalists — presumably also part of the CWRU music program — supplied some incidental music for the service; especially successful was the postlude, a lively chaconne by Georg Muffat. Earlier, Nicolas Haigh brought out the rich coloration of the Newberry Organ with a haunting Récit de Cromorne by Louis Marchand (daringly employing the tremulant) and a grand and reedy Dialogue sur les Grands Jeux by Nicolas de Grigny.

I’m not sure whether Lenten fare is supposed to be as pleasurable as what these excellent young musicians served up. Regardless of liturgical injunctions to penitence, this fine music of the French Baroque was as sweet and loving a Valentine’s Day gift as one could wish for.

Nicholas Jones is Professor of English at Oberlin College, where he teaches courses on Shakespeare, Milton, and British Romantic Literature. In recent years, he has pioneered courses that link Oberlin’s College of Arts and Sciences with the Oberlin Conservatory of Music and the Allen Memorial Art Museum. Nick is an avid amateur musician, currently studying baroque recorder and viola da gamba as well as playing violin and viola. He has sung in a number of choruses and participated in workshops at Amherst Early Music, Oberlin’s Baroque Performance Institute, and Early Music Week at Pinewoods. Nick grew up in the Cleveland area and still remembers George Szell and the Cleveland Orchestra playing Beethoven’s Seventh Symphony at Severance Hall. He also remembers the Beatles singing at Lakefront Stadium, but because of the screaming, he couldn’t hear a note.

END_OF_DOCUMENT_TOKEN_TO_BE_REPLACED

Rodgers & Hammerstein’s Cinderella was originally produced for television in 1957 — seven years after the animated Disney film was released — and starred Julie Andrews. According to the Rodgers & Hammerstein website, it was viewed by over 100 million people. END_OF_DOCUMENT_TOKEN_TO_BE_REPLACED

The story line has its origin in an 1855 play and an 1842 farce that Thornton Wilder mined for his 1938 play The Merchant of Yonkers. When that turned out to be a flop, in 1954 Wilder made the crucial decision to re-center the show around the character of the legendary marriage broker Dolly Gallagher Levi and renamed it The Matchmaker. END_OF_DOCUMENT_TOKEN_TO_BE_REPLACED

The Dodero Center for the Performing Arts at the Gilmore Academy in Gates Mills is one feature of an impressive campus. The auditorium is shallow, the stage is deep, and the ensemble played without a shell. Throughout the program, the sound, especially in instruments’ lower registers, tended to disappear. END_OF_DOCUMENT_TOKEN_TO_BE_REPLACED