Jogging onto the stage of Severance Hall, Liza Grossman wasted no time in launching the barefoot Contemporary Youth Orchestra and Chorus straight into the opening number of their annual “Rock the Orchestra” concert on Friday, June 5. After a slow, somber musical introduction from the students, singer-songwriter and philanthropist Graham Nash walked onstage, serenely and similarly unshod, to a standing ovation from listeners. He began GNASH — a concert celebrating his five-decade musical career — with a spirited rendition of “To the Last Whale” (Nash, David Crosby, 1975).

“What an incredible honor it is for me to be here,” Nash said, warmly embracing Grossman and waving to his audience and fellow musicians. While the performers’ lack of shoes probably referenced the ’60s era of his famous bands, The Hollies, and Crosby, Stills, and Nash, the singer proved his message still relevant and his voice still strong.

Nash continues to preach antiviolence through his music with politically charged songs like “Burning for the Buddha,” (Nash, James Raymond, 2014) a protest against the recent self-immolation of Tibetan monks against Chinese treatment of Tibetans. He dedicated “Watch Out for the Wind” (Nash and Shane Fontayne, 2014) to the memory of Michael Brown of Ferguson, Missouri, and he sang “Soldiers of Peace” (Nash, Craig Doerge, Joe Vitale, 1988) with a zealous intensity, garnering peace-signs from some members of the audience.

Stefan Podell, Linwood Bell, and Mau Quiros provided the orchestrations for the evening, and the Contemporary Youth Orchestra and Chorus alike performed the dramatic arrangements with admirable precision and vivacity. 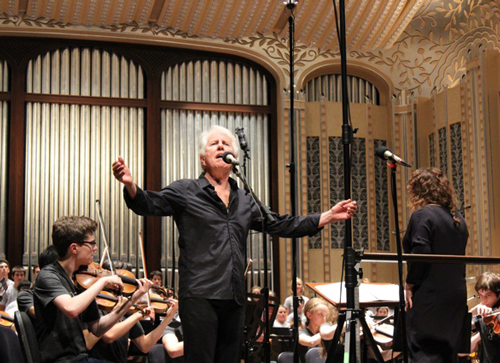 Concertmaster Jacob Duber delivered the heartfelt solos in “Simple Man” (Nash, 1971) with confidence and warmth, while principal winds performed the tonally exotic cadenzas in “Marakesh Express” (Nash, 1969) with abandon. CYO percussionists Ashley Lingafelter and Todd Andersen completed the Eastern vibe in “Marakesh” with a pair of djembe drums at the front of the stage.

“Third class on the express was where it was happening,” Nash joked. At 73, Nash has lost none of his enthusiasm for performing, animatedly chatting with his audience between songs and introducing his next number with a lighthearted humor that helped offset the sober subjects of many of his pieces. “Cold, rainy, foggy, dreary, Manchester — summer,” he said, beginning “Cold Rain” (Nash, 1977) with a nostalgic laugh.

“Crosby, Stills, and Nash have around nine hundred songs to their name, but I wonder how many more we would have if we hadn’t kept getting wasted on the way,” Nash said while orchestra members Ben Poe (trumpet) and Eric Poe (percussion) made their way to the front of the stage to join Nash in three-part harmony for what else but “Wasted on the Way.” The brothers’ pure voices blended excellently with Nash’s own, and they bowed to thunderous applause. 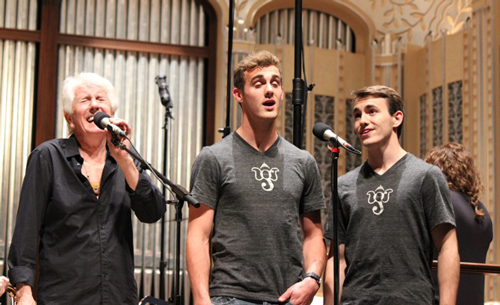 Another crowd favorite, “Our House” (Nash, 1970), brought the audience to its feet before the final notes had even died away. GNASH was being recorded for a CD as well as for future broadcast, and the singer repeated some of his songs to get them to sound just right. But with “Our House” and the other reprises, listeners didn’t seem to mind, clapping just as hard for the second performance as the first.

Grossman led the orchestra and choir with a flair for the dramatic, sometimes gesticulating wildly or even dancing on her podium to inspire her students. The musicians’ balances were excellent — leading instrumental lines could always be heard, but the orchestra never overpowered Nash or the chorus.

The performers encored with “Teach Your Children” (Nash, 1970) and “Bus Stop” (Graham Gouldman, 1966) during which Nash stepped onto Grossman’s podium to conduct the final chord with her. Repeating “Watch Out for the Wind” a final time for the recording, Nash finished with an enjoyably positive energy, sending listeners out into the street audibly whistling some of the songwriter’s catchier tunes.