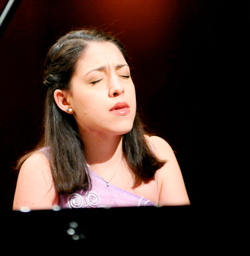 Director Emanuela Friscioni has chosen to take a new tack with this season’s Tri-C Classical Piano series at the Cleveland Museum of Art. Three Sunday afternoon recitals will showcase young pianists who are beginning to come to international prominence, commencing with 21-year-old Italian pianist Beatrice Rana, who won the silver medal at the fourteenth Van Cliburn Competition in Fort Worth in 2013.

Rana, who demonstrates an elegant and engaging stage presence, had the opportunity to show her keyboard prowess on Sunday, October 5 in Gartner Auditorium in a program of music by J.S. Bach, Frederic Chopin and Sergei Prokofiev.

The centerpiece of her program was Chopin’s Sonata No. 2 in b-flat, op. 35. Summoning up a vast range of dynamics and color, Rana skillfully built up approaches to fearsome climaxes without thickening Chopin’s textures. Her bravura playing in the Scherzo was followed by her steady, inexorable pacing of the funeral march, relieved by a sotto voce middle section of transcendent calm. She cloaked the final Presto in a velvet haze that retained its character right up to the final, dismissive chords.

Prokofiev’s Sonata No. 6 in A, op. 82, followed the Chopin after what seemed like an unnecessary intermission. Rana played with fingers of steel in its violent passages, then offered a complete contrast with the measured, separated chords of the second movement Allegretto. The strange Tempo di valzer lentissimo disappeared into nothingness at the end, leading to a strongly rhythmic, scampering toccata with clear, crystalline voicings and hammered repeated notes.

It’s always fascinating for those of us with an organ and harpsichord background to hear how pianists will bring their expanded tool kits to the music of Johann Sebastian Bach. In Rana’s case, Bach’s B-flat Partita, which opened the recital, enjoyed the full range of color possibilities, articulations and expressive inflections that the piano has to offer. She stretched rhythms in the Prelude for expressive effect, yet brought out its inner figures clearly, and pulled normally hidden lines out for emphasis in other movements.

Though her tempo in the Allemande was faster than normal for the Baroque dance form, and her pacing of the Corrente was even quicker, she effectively stopped time with the Sarabande, giving that exquisite movement ample breathing space. If her improvised lead-ins to some repeats weren’t quite idiomatic, her playing of the cross-hand Gigue was stylish and thrilling.

Beatrice Rana’s Cleveland debut obviously impressed the good-sized audience. Called back to the stage, she responded with a lovely, lyrical encore: Liszt’s arrangement of Robert Schumann’s song, Widmung. Here’s a competition winner you’ll no doubt hear from again and again.

Next up in the series: Ohio’s own Gavin George (11, from Granville) on November 9, and Israeli pianist Adi Neuhaus (18) on March 22.