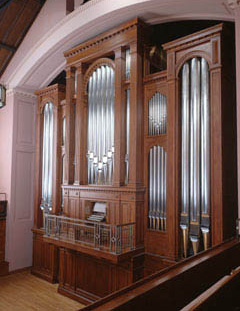 Do you enjoy pub crawls for comparing the ambiance of different watering holes? Organ crawls can be just as pleasurable for organophiles — who often combine bending the ear and the elbow to double the fun. Now that the pesky coronavirus has crashed the party, moving about in groups from one venue to another is not in the cards for the foreseeable future, but thanks to the faculty of the Oberlin Summer Organ Academy, you can at least take a virtual tour of some of the Conservatory’s impressive instruments and hear them played in two online programs on Thursday and Friday.

On June 25 at 7:30 pm, organ professors Jonathan Moyer and Christa Rakich will join organ curator David Kazimir on Oberlin Stage Left to tell about the distinguished history of organ instruction at Oberlin. They’ll also lead a video tour to four of Oberlin’s concert organs — just a few of the instruments in the Conservatory’s impressive keyboard fleet, which includes practice and studio instruments of all styles and sizes. The virtual tour will include brief performances. 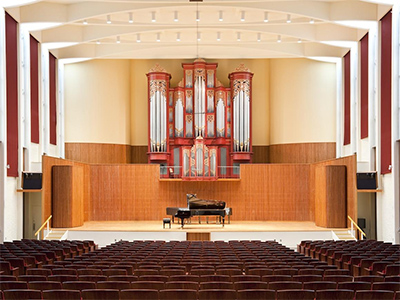 Thursday’s itinerary includes Finney Chapel, home to the large French Romantic instrument in the symphonic style built in Gloucester, Massachusetts by the C.B. Fisk company and dedicated in 2001; Warner Concert Hall, which houses a monumental instrument in the 18th-century Dutch style built by D.A. Flentrop Orgelbouw in Zaandam, the Netherlands in 1974; Fairchild Chapel, where a mean-tone organ by John Brombaugh was first heard in 1981; and Peace Church, just off the Oberlin campus, where an 18th-century instrument built by George Bozeman Jr. & Company in the 18th-century German style of Gottfried Silbermann was relocated by Hal Gober in 2010. 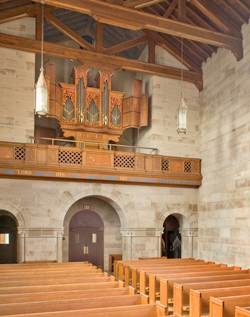 On Friday, June 26 at 7:30 pm, Moyer and Rakich will be back online to play a virtual Summer Organ Academy faculty recital featuring the instruments in Fairchild, Finney, and Warner, adding Warner’s recently-installed second organ, a 1989 Spanish Baroque-style instrument built by Greg Harrold that David Kazimir moved from its original home in California. 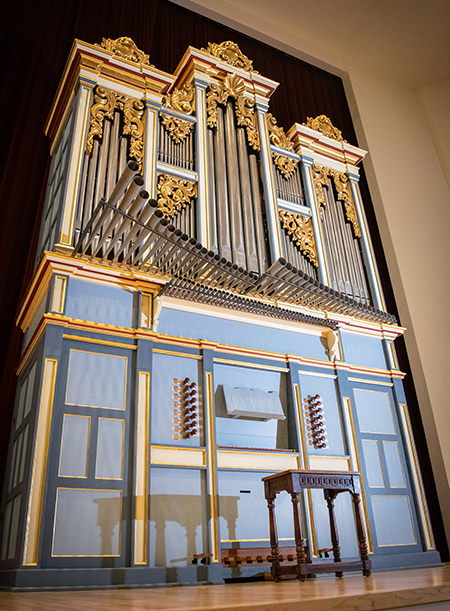 Count on hearing a variety of music tailored to the different national styles represented by each instrument. And lest it seem like Oberlin has covered all the historical bases in assembling its organ collection, the Conservatory has yet to acquire instruments in the French Baroque and Italian styles. Future acquisitions will have to wait for more propitious economic times, but meanwhile, Northeast Ohio music lovers can revel in the variety of Oberlin’s stunning treasury of instruments.