In 1735, Johann Sebastian Bach’s congregations in the two principal churches of Leipzig were treated to six new cantatas between Christmas Day and Epiphany, at a rate of one per feast day. In 2019, Apollo’s Fire’s audiences got to hear two-thirds of those pieces in one sitting, as guest conductor Julian Wachner led Cantatas Nos. 1, 2, 5, and 6 of Bach’s Christmas Oratorio in five venues around the city. I heard the performance on Friday, December 13 in Gartner Auditorium at the Cleveland Museum of Art.

Little did those Leipzig congregations know that the six cantatas weren’t new, but largely repurposed from Bach’s pre-existing music, including secular cantatas. Following a widespread Baroque practice rather than working a scam, Bach skillfully adapted secular music to sacred purposes and wrote new recitatives to tell the story of the birth of Jesus, the angel’s visitation to the shepherds, and the arrival of the Magi. 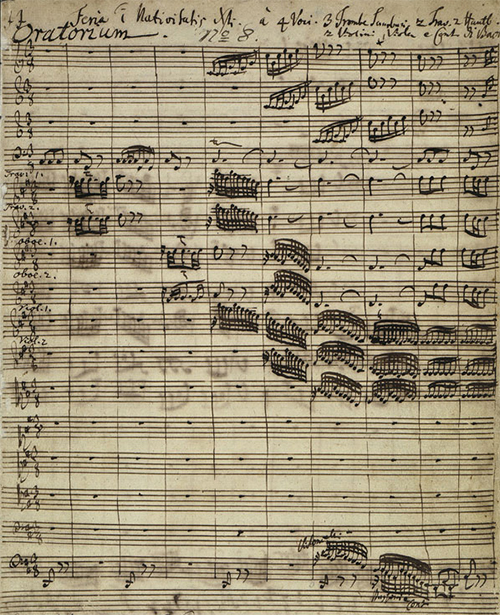 Trumpets and drums graced the opening chorus, Jauchzet, frohlocket, introducing the dulcet tones and nimble capabilities of period brass instruments in the hands of trumpeters Steve Marquardt, Perry Sutton, and Paul Perfetti. The choral entrance was strong and thrilling. Also enhancing the festivities were oboists Debra Nagy and Kathryn Montoya, traverso flutists Kathie Stewart and Sarah Lynn, and bassoonist Marc Vallon, though the winds were relegated to back-row positions on the wide Gartner stage and sounded distant from the right side of the auditorium.

Though period performances are often led from the keyboard, Wachner chose to conduct from the podium, where he kept close watch over the proceedings, but never over-conducted. In choruses and sinfonias, he pointed up details and accents. For recitatives and many arias, he left the progress of the music up to the soloists and continuo players in a strong demonstration of collegial trust.

Highlights abounded. In Cantata No. 1, Blumberg and Marquardt came to the lip of the stage for their eloquent duet in Großer Herr, o starker König.

The Pastorale (Sinfonia) that opens Cantata No. 2 was lovely, as was Stewart’s traverso obligato in Soph’s Frohe Hirten, eilt and Moody’s Schlafe, mein Liebster. The final chorus of angels was improbably fast, but chorus and orchestra pulled it off handily, as they did the opening chorus of Cantata 5, Ehre sei Gott.

In a lovely touch, when the Magi approach the manger, Wachner had the chorus remain seated to sing the devotional chorale Ich steh an deiner Krippen hier without orchestral accompaniment.

One of the remarkable features of the Christmas Oratorio is its use of what has popularly become known as “The Passion Chorale” in a context very different from its use in the St. John and St. Matthew Passions. The whole oratorio closes with that chorale melody, decorated by ornate trumpet parts once again flawlessly played by Messrs. Marquand, Sutton, and Perfetti.

It’s a lot to take in over two and a quarter hours, but Wachner’s masterful pacing and the splendid singing and playing of Apollo’s Fire made the time fly by.

In a nice touch, Apollo’s Musettes — a young female chorus — joined the ensemble for the first half of the evening, then made a dramatic appearance down the aisle at the end of intermission (accompanied by drummer Matthew Bassett) to sing a few lovely traditional carols before Bach resumed his Christmas narrative.