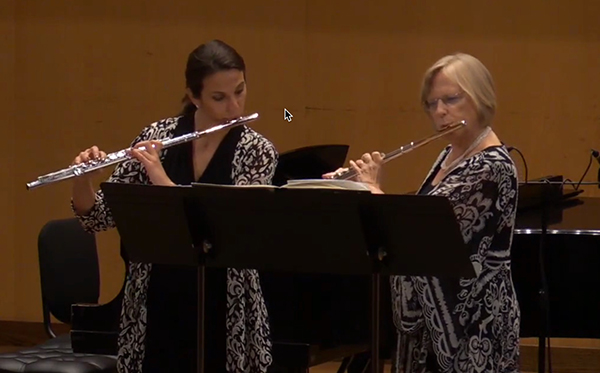 Amid the recent heat wave, the Kent Blossom Music Festival offered refuge with events in cool, tranquil spaces. Rarities, favorites, and unexpected delights packed one concert last week, a showcase for members of The Cleveland Orchestra who also serve as Festival Faculty. The music on Wednesday, July 17 filled Kent State University’s Ludwig Recital Hall without overwhelming it. This may seem unexceptional for a space purpose-built for duos, quartets, and the like, but the program included both whisper-soft moments for cello and a spirited duet for piccolos — noted for their carrying power, but perfectly balanced in this room.

Jessica Sindell, soon to mark her first year as a member of the Orchestra, produced sounds ranging from crystalline high tones to wintry lows in Poulenc’s Sonata for flute and piano. Carolyn Gadiel Warner, a member of both the keyboard and violin sections, balanced right-hand brightness with subtle voicing in the left. Respecting Poulenc’s characteristic restraint, the duo allowed glimpses of darkness in the second movement without needless gravitas. 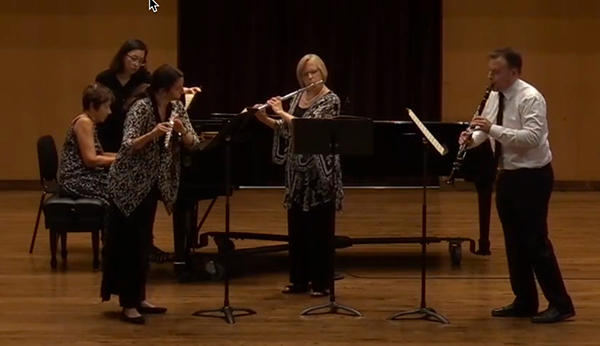 Mary Kay Fink and Robert Woolfrey joined the duo for Honegger’s Rapsodie, distinguished by the alluring combination of flutes as melodists over the warm alto of the clarinet, all within the embrace of the piano. From the enchanting opening through the ending, with its premonitions of Messiaen, the players made an airtight case for the piece.

Fink and Sindell likewise made the most of Nicolas Roussakis’s Six Pieces for Two Flutes. Kaleidoscopic swirling, convergence, interweaving, unexpected resolution: the composition offers inspired gestures in each movement. The duo played with clear intention and expressive power, and left the audience warmly applauding a work of uncompromising modernism.

Martinů’s Scherzo for flute and piano took on new nuance in Fink’s arrangement for piccolo. Audiences seldom have the opportunity to hear a first-rate player plumb the depths or ply the middle range of the instrument, yet there was Fink, making sounds spanning from the quality of a passerby whistling to that of a trumpet player producing muted murmurs.

The flutists’ portion of the program ended with Henri Kling’s Two Little Finches, which Fink introduced as the “dessert” of the set. Light as whipped cream and made more comic by Sindell’s walk-on entrance, the performance put concert-hall artistry in service to the charming theatrics of a summertime bandstand. 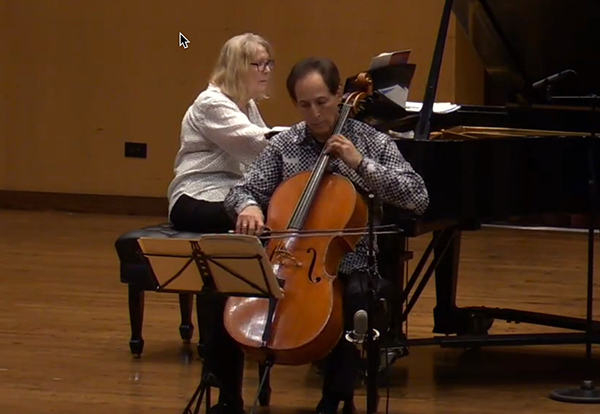 Assistant Principal cello Richard Weiss and Principal Keyboardist Joela Jones took the stage next, for a series of pieces from the Spanish-speaking world and environs. An Intermezzo from Granados’ Goyescas found Weiss sounding assured across the instrument’s range and Jones playing beautiful tremolos and swaying rhythms.

Gaspar Cassadó’s Requiebros alternated severity with sensuality to compelling effect in Weiss’ and Jones’s clean, tight reading. Le Grand Tango gave Jones plenty to work with, its alternately lumbering and thrashing rhythms vital under her hands, but it also showcased Weiss’s unique sound. In his interpretations, each note has a clear beginning, middle, and end, and phrases feel either expertly connected or artfully fragmentary. Words can barely capture the magic of the abrupt yet definitive ending as this duo rendered it.

Jones, who sparkled as a soloist in the Orchestra’s memorial tribute to Pierre Boulez back in 2015, clearly knows the French piano repertoire backward and forward. This became clear in the duo’s performance of Ravel’s Pièce en forme de habanera, modern in its strange, glittering clarity. The concert ended with Pizzolla’s Libertango, which astonished from Jones’s theatrical count-off to her and Weiss’s sudden, gripping acceleration to the end.

END_OF_DOCUMENT_TOKEN_TO_BE_REPLACED

Rodgers & Hammerstein’s Cinderella was originally produced for television in 1957 — seven years after the animated Disney film was released — and starred Julie Andrews. According to the Rodgers & Hammerstein website, it was viewed by over 100 million people. END_OF_DOCUMENT_TOKEN_TO_BE_REPLACED

The story line has its origin in an 1855 play and an 1842 farce that Thornton Wilder mined for his 1938 play The Merchant of Yonkers. When that turned out to be a flop, in 1954 Wilder made the crucial decision to re-center the show around the character of the legendary marriage broker Dolly Gallagher Levi and renamed it The Matchmaker. END_OF_DOCUMENT_TOKEN_TO_BE_REPLACED

The Dodero Center for the Performing Arts at the Gilmore Academy in Gates Mills is one feature of an impressive campus. The auditorium is shallow, the stage is deep, and the ensemble played without a shell. Throughout the program, the sound, especially in instruments’ lower registers, tended to disappear. END_OF_DOCUMENT_TOKEN_TO_BE_REPLACED