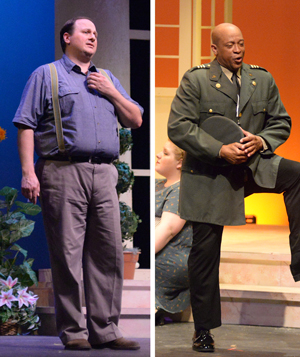 “It is an exciting undertaking, but there were a lot of things that came together in order for it to happen,” Charles Latshaw said during a telephone conversation. “This year we had a unique challenge and opportunity in that The Cleveland Orchestra is in New York this week as part of the Lincoln Center Festival, which left us with fewer coaches for that period of time. We talked about different options, and in the end we decided to bring opera back to the festival, and I think the audience is going to be receptive to the idea.”

Latshaw pointed out that in the past the Kent/Blossom Festival included a vibrant vocal component, especially when the noted choral conductor Robert Shaw was involved. “There were chamber choruses, and they did perform some operas— we found some programs which included a performance of Don Giovanni. But all of that ended about thirty years ago. There are many K/B alumni who were part of the vocal program who are always asking when we’re going to bring it back.”

Once the decision was made to go in the director of opera, Latshaw and his colleagues went in search of an opera that didn’t require a chorus, or staging and sets, and used the right number of musicians and the instrumentation that he had available. “I contacted a friend who runs an opera company in Los Angeles, and when I asked him what he would recommend he told me he had exactly the right piece. And it’s true. La Cambiale di Matrimonio is also a great piece. Even though he was only eighteen years old when he wrote it, it sounds like Rossini. He has already found his voice, and that’s what’s great about it.”

La Cambiale di Matrimonio, or The Marriage Contract, is a one-act comic opera with a libretto by Gaetano Rossi. Set in London, the plot evolves around Tobias Mill, (Frank Ward Jr.) an English merchant who has arranged for his daughter Fanny (Lara Troyer) to marry the merchant Slook, (Brian Keith Johnson) from the exotic country of Canada. Of course Fanny is really in love with the penniless Edward Milfort, (Timothy Culver). After a lot of deceit and double-crossing — resulting in almost everyone wanting Slook dead — Mill then threatens Slook to a duel. Fortunately, Slook replaces Mill’s pistol with a peace pipe, which Mill grabs, not realizing what it is. Needless to say, all ends happily. The cast also includes Benjamin Czarnota and Denise Milner Howell as the servants Norton and Clarina.

The performance will be sung in Italian with English supertitles. “We’ve replaced the original Italian recitatives with English dialogue, so it’s easy to follow the story. It’s a concert performance, and the orchestra will be on stage, but the nice thing about the opera is that all of the action takes place in one setting, so staging isn’t really necessary in order to make sense of the plot. I think that if you have never been to an opera, this is a great one to come to, because it’s a short, one-act comedy, and you’ll understand all that is going on. It’s very approachable and has a happy ending — nobody dies.”

I spoke to tenor Timothy Culver and baritone Brian Keith Johnson and asked them to give me their impressions of the opera, the challenges of performing Rossini, and their many collaborations.

“Although it is Rossini’s first opera, it does sound fully formed. You can hear what is coming later on in his career, but all of his compositional components are there.

“The story is the typical soprano and tenor lovers who are destined not to be together, and in this case the father has other ideas for his daughter, the soprano. Of course the tenor has no money and can’t possibly pay her dowry. The father brings in the rich foreigner — from Canada of all places — to marry his daughter. But of course they do end up being able to be together through the good graces of the baritone. So the story is funny and cute.

“My biggest challenge is that the tessitura tends to sit on the higher side, especially in the ensemble numbers. So you have to be comfortable singing there for an extended period of time. Usually there is a lot of coloratura in Rossini, but my role does not have a lot of that, although many of the other roles do.

“Brian and I have performed our last three operas together: Tosca, Elixir, and now this one. In fact we’ve done at least 100 different shows together in the last twelve years, which just seems crazy. But we were talking about how the challenges of Rossini are so different from the others. It’s not quite like singing Mozart or Handel. It’s right in between those two composers, and that’s fascinating to me.

“When you make the decision to be a regional opera singer, because of your job or family, you have to be flexible. You have to be comfortable singing in multiple styles. Unless you’re in the top one percent of singers in the world who can say ‘these are the seven roles that I sing,’ most of us have to be able to perform a lot of styles. You need to have good relationships with a lot of different area companies. Most importantly, you have to get along with your colleagues.”

“I think the opera is completely charming. The characters are very straightforward — they don’t try to hide their emotions, they wear their hearts on their sleeves. And I’m the only one who’s clueless about the fact that everyone wants me dead. Once again, the baritone is the bad guy, but at least I don’t die. A lot of times the baritone dies. So it’s a happy opera and I get to live.

“Vocally, it is challenging. Rossini writes a lot of florid lines, and a lot of fast Italian dialogue. As singers, we always try to be idiomatically correct with the language. Many times we don’t pay close attention to the details of the language, so one of the biggest challenges is learning the text as though you’re singing it for an Italian audience who knows every nuance. It’s all about communication. You can have the best voice in the world, but if you’re not telling the story, you’re not doing your job. That is something I have learned over time.

“Tim and I sing together all the time. We’re in a vocal ensemble with Denise and Lara so the four of us work together frequently. But to come together for this opera will be cool. I’m also looking forward to singing with Frank. When you have similar voice types you don’t get to sing together a lot — although he is a bass-baritone and I’m a high baritone. But in this opera we have a lot of paired duets.