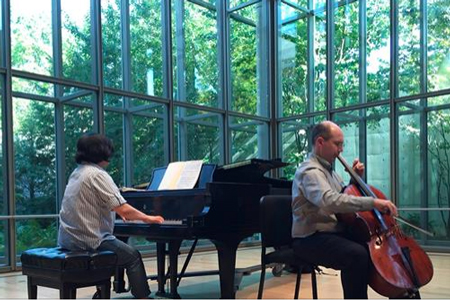 In a thrilling and revelatory recital on September 23, Cleveland Orchestra principal cello Mark Kosower and pianist Jee-Won Oh celebrated the centenary of Argentine composer Alberto Ginastera. Drawing a large audience to Mixon Hall at the Cleveland Institute of Music, Kosower visited all three of Ginastera’s style periods and offered his own tribute to Aurora Nátola, who inspired most of the composer’s works for the cello.

Ginastera’s music combines European traditions of elegance and formal clarity with Latin American rhythmic vitality — an engaging synthesis which ran throughout Friday evening’s program, beginning with the Pampeana No. 2 from his “Subjective Nationalism” period (1948-1958) and ending with the Sonata, one of the final works in his “Neo-Expressionist” period.

The earliest work, Cinco canciones populares argentinas, represented Ginastera’s “Objective Nationalism,” a chapter of his life when he used South American folk music directly. Later, like Bartók, he employed that music as a springboard, creating his own takeoffs on indigenous traditions.

The other two works were dedicatory pieces. Ginastera’s Pueña No. 2 was written during his Neo-Expressionist period for the 70th birthday of the Swiss music impresario Paul Sacher. Kosower’s In Memory of Aurora Ginastera recalls a visit Kosower and Oh, who are husband and wife, made to Ginastera’s widow in Geneva shortly before she passed away in 2009.

An evening of cello music by a single composer might be too much of a good thing, but this one offered great variety in addition to masterful playing. Like Beethoven’s, Ginastera’s three style periods are strikingly different, though the music inhabits traditional forms.

In Pampeana No. 2, Ginastera’s references to folk music are symbolic, yet the music represents the vastness and the emotional states the composer associated with the pampas or countryside, and Koswer and Oh responded to its shifting moods with chameleonic ease.

The five brief Argentine folksongs, originally for voice and piano, are settings of real tunes, each with their own strong character. “Zamba” and “Arroró” are the simplest, while “Gato” (a dance with Spanish roots) is wild, enlivened with full-keyboard glissandos. With Kosower’s lyrical and narrative skill, the songs came off splendidly without a singer.

The Pueña No. 2 evokes the “sonorous world” of the Inca empire, embedding Sacher’s name both into bird calls in the first moment — a melancholy love song — and into a festival Carnival dance fueled by Indian corn alcohol in the second. Here, Kosower was alone on stage with his cello, skilfully conjuring up a variety of handsome, exotic sounds, some through techniques that are probably trade secrets among cellists.

Kosower’s own solo piece, both lyrical and urgent, was a moving tribute to someone he only met briefly, but who obviously left an indelible impression. (After hearing him play, Aurora Ginastera suggested that Kosower should record both of her late husband’s cello concertos, which he later did). The ascending scale at the end was touchingly valedictory.

Kosower and Oh ended their program with Ginastera’s remarkable Sonata, dedicated to Aurora, as were his first concerto and the revision of the second. The work is so packed with arresting ideas that Kosower’s blow-by-blow description took up two and a half pages in the program. Bitonality, tone clusters, and Argentine rhythms play major roles in the first movement, while the second features expressive cadenzas for both instruments. The third, a “murmuring scherzo,” is magical in content and takes the form of a palindrome. Everything breaks loose in the wall-to-wall excitement of the finale.

Mark Kosower and Jee-Won Oh put Ginastera’s music across splendidly and with unflagging stamina throughout this program, winning a huge ovation from the audience, as well as new fans for the music of Alberto Ginastera.

END_OF_DOCUMENT_TOKEN_TO_BE_REPLACED

Concerts cancelled in 2020 may have put a brief gap in Ling’s record with the Orchestra (a program every season since 1984-1985), but the ensemble’s former resident conductor more than made up for it Sunday with a performance both commanding and personal. END_OF_DOCUMENT_TOKEN_TO_BE_REPLACED