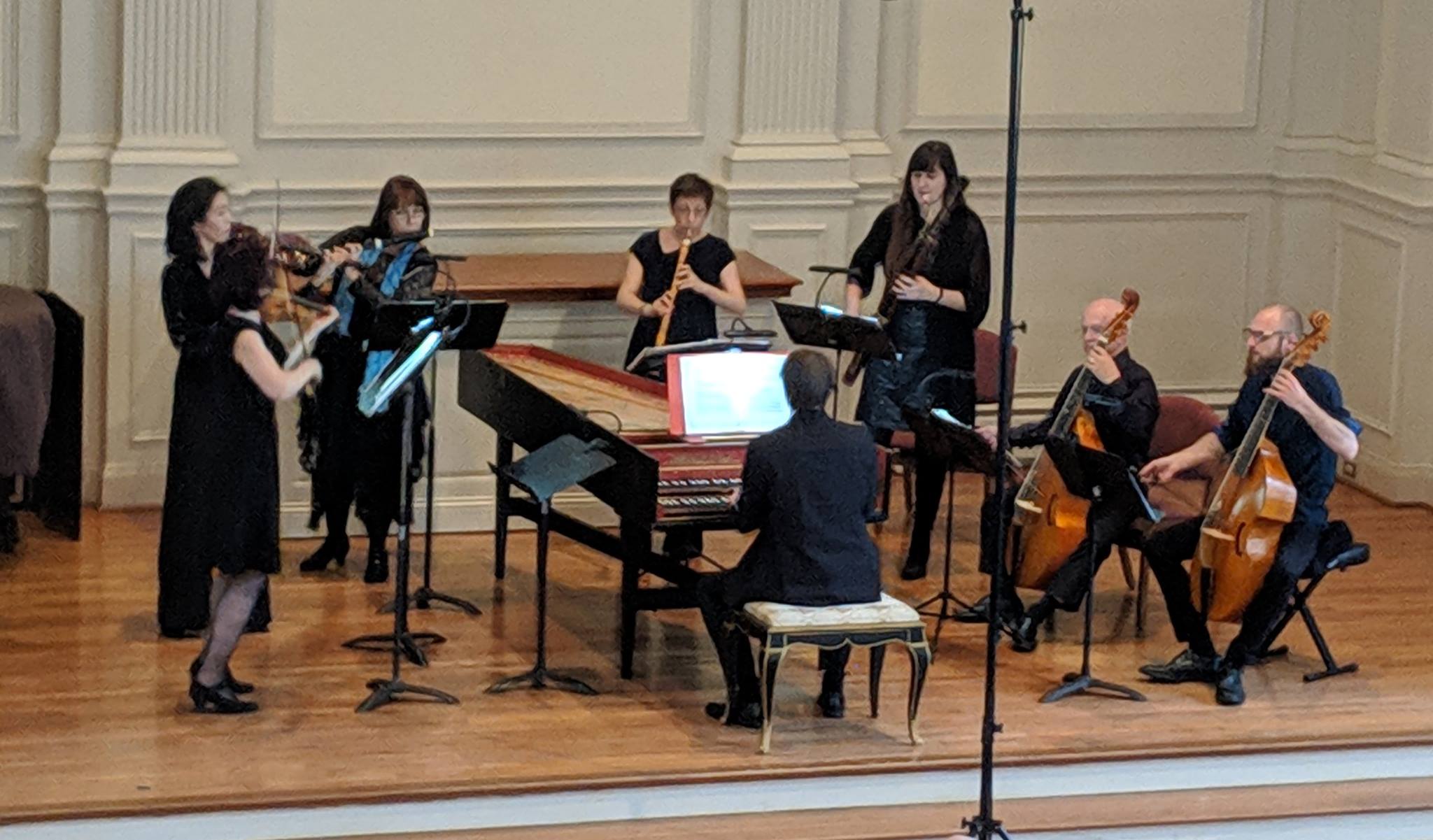 Les Délices concluded their tenth anniversary season from April 5-7 with evocations of what our Baroque forebears thought to be the basic constituents of the natural world. The three programs sprang from founder and oboist Debra Nagy’s arrangement of Jean-Féry Rebel’s brilliant Les Elements, but also included extracts from the operas of Jean-Philippe Rameau, and a new work commissioned from Theo Chandler. Harpsichordist Mark Edwards provided a complementary interlude: two of Rameau’s keyboard works that express the powers of nature.

In 1959, when Tom Lehrer set the names of the chemical elements to a Gilbert & Sullivan patter song, there were merely 102 of them to rattle off — now there are 118. Things were much simpler when Rebel wrote his 1737 simphonie nouvelle. The composer had to deal only with Earth, Air, Water, and Fire, but he characterized them in evocative music, beginning with a jarringly modern representation of Le Cahos — the entropy that was thought to have reigned over the cosmos before order was established.

If the eight-piece Baroque band at Lakewood Congregational Church on April 6 began the program in chaos, they ended it in beautiful accord with more movements of Rebel’s dance-inspired music. Traverso flutist Kathie Stewart, violinists Julie Andrijeki and Jessica Park, violists da gamba Steuart Pincombe and Jaap ter Linden, and bassoonist Anna Marsh joined Debra Nagy and Mark Edwards in lively and elegant performances of the Loures, Chaconnes, Ramages, Tambourins, Siciliennes, Airs, Rossignols, and Caprices into which Rebel poured his imitations of nature.

In between, movements from Rameau’s Hippolyte et Aricie, Boréades, and Les Indes galantes alluded to the elements in less direct but no less colorful musical language.

Nagy likes to take her French Baroque ensemble to new levels. Last season, she introduced a fusion program linking Baroque airs with modern torch songs, and this year she commissioned a new work for period instruments. Theo Chandler came through with a fresh look at Earth, Air, Fire, and Water from a 21st-century point of view.

In his composer notes, Chandler wrote that he set out to discover a vocabulary of colors and gestures “that felt particularly well-suited for this project.” That meant “thick, sturdy chords in the harpsichord and strings” to represent Earth, “fluttery trills and breezy scales” for Air, and “deep, swelling sonorities in the viols” to depict Water in the churning of an ocean. Fire, he said, would be the most energetic and jagged movement, “in which the instruments attempt to ignite the fire repeatedly, emitting sparks and smoke.”

Although period instruments tuned to French Baroque pitch of A=392 Hz don’t have the inherent capacity to sound as brilliant — or play as loudly — as their modern equivalents, Chandler did a fine job of scaling his depiction of natural events to the resources at hand, and the musicians of Les Délices delivered an impressive account of his score. “Air” gave several of them the opportunity for solo cadenzas. Scott Metcalfe, scheduled to play violin, was sidelined with a finger injury, freeing him to step in to conduct the piece.

Similarly, Mark Edwards pressed the harpsichord to its sonic limits in Rameau’s Les Tourbillons (“Whirlwind”) and Les Cyclopes — representing Zeus’s blacksmiths who hammered out lightning bolts in underground forges. If those solo works didn’t literally shake the earth under your feet, they certainly worked their magic on your imagination.

Photo: “The Elements” on Sunday at Plymouth Church.

END_OF_DOCUMENT_TOKEN_TO_BE_REPLACED

As the 250th anniversary of Beethoven’s birth sweeps classical music audiences along a twelve-month, field-wide festival of heroics, experiments, rhapsodizing, and apocalyptic drive, a challenge arises for performers who plan to acknowledge the occasion. In a season peppered with all-Beethoven programs, how does one stand out? Of the many approaches that could thrill an audience and do justice to the composer, which ones serve the ensemble just as well? On a late January evening, the Amici Quartet offered their answer: impeccable playing and utter unity. END_OF_DOCUMENT_TOKEN_TO_BE_REPLACED