When Les Délices and its Chicago counterpart, The Newberry Consort, were casting about for a collaborative project, the Leuven Songbook came immediately to mind for both directors, Debra Nagy and Ellen Hargis. “I told Debra we’d love to do something with that,” Hargis said in a telephone conversation, “and she said, ‘So would we. It doesn’t make any sense to do two programs, so why not do it together?’”

A collaboration made all the more sense because the two groups share a common pool of performers, which for this project includes Hargis (soprano), Nagy (harp, voice, and Medieval winds), David Douglass and Allison Monroe (vielle and rebec), Jason McStoots (tenor), Daniel Fridley (baritone), Charles Weaver (lute), and Charles Metz (organetto). “Almost everyone has worked with someone else in some configuration,” Hargis said. 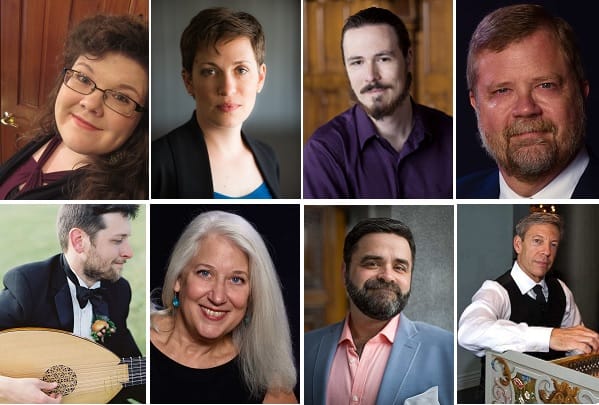 Last week, the Newberry Consort and Les Délices presented their Leuven program three times — at Chicago’s Newberry Library, at the University of Chicago in Hyde Park, and at Northwestern University. This weekend, the group reassembles in Cleveland to present performances on Friday, January 18 at 7:30 pm at Holy Trinity Lutheran in Akron, on Saturday, January 19 at 8:00 pm at Lakewood Congregational Church, and on Sunday, January 20 at 4:00 pm in Herr Chapel at Plymouth Church in Shaker Heights.

The concerts will visit 14 selections from the Leuven book, including 6 of the unique songs. “The collaboration is mostly on Debra’s shoulders. She has curated the program and drafted the instrumentation. Of course when we start rehearsing, we make adjustments if something doesn’t work,” Hargis said. “And the Newberry Consort has acquired a beautiful late Medieval organetto that we really wanted to feature this year, so we stirred that into the program.” 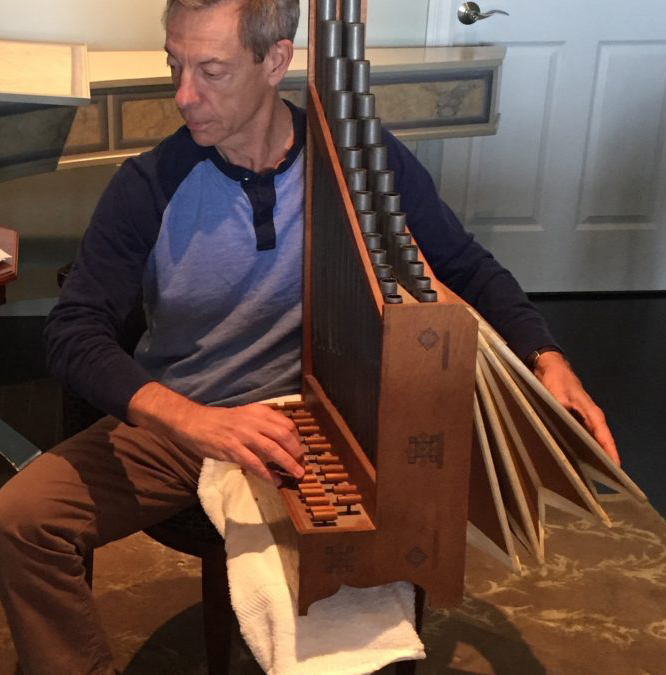 To put a frame around the selections, Nagy has constructed a love story narrative based on the courtly epic Roman de la Rose. “It’s a nice way to give context to the rarefied poetry of a genre that’s super familiar to us but not so much to the public,” Hargis said. “The tradition of courtly love goes on from the 12th to the late 15th century, and wrapping it into a narrative puts the poetry on a more human path.”

Hargis promises that the multimedia feature of the performances is going to be stunning. “The woman who does the graphic design for the projections doesn’t just make pictures with supertitles printed on them. She’s a musicologist as well as a graphic designer, and so she brings all her research chops to putting together these presentations. Tying in imagery from the Roman de la Rose to support the narrative that Debra has created around these lovers and their journey through the ups and downs of their affair will give our audience some of the context that those of us who are really immersed in the period already enjoy. Sharing a strong visual element with the audience helps bring the music out of the realm of the intellectual and into the sensual a bit more.” 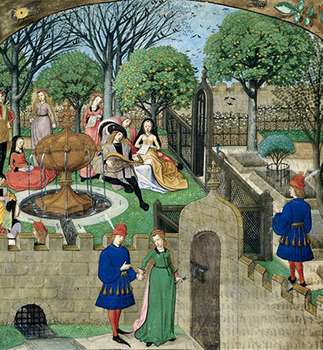 One thing the combined ensemble will not do is to try to play from the original manuscript. “We’re performing the pieces in modern editions made either by Debra or Scott Metcalfe. We have a real-size facsimile of the songbook that Debra bought, but there’s no way you could ever play music from it,” Hargis said. “It’s a miniature typical of those precious, small art objects that were meant to be owned and treasured like Fabergé eggs. I can imagine that a rich person who was a music and art lover would be delighted to have something like that in their collection.”

As was the practice in the late Middle Ages, composers aren’t identified in the chansonnier, and that makes a fun guessing game for the musicians. “As we work through the pieces, we’ll say, ‘boy, this sounds like Ockeghem,’ or ‘this doesn’t sound at all like Binchois,’ or ‘this reminds me of Agricola,’” Hargis said. “We’re constantly struck by thematic material, devices, or clichés that we know from other composer’s works, and if we wait long enough, we’ll probably get some pretty confident attributions from the experts. But they’re all gorgeous pieces, and quite varied. I’ve had such a good time learning them.” 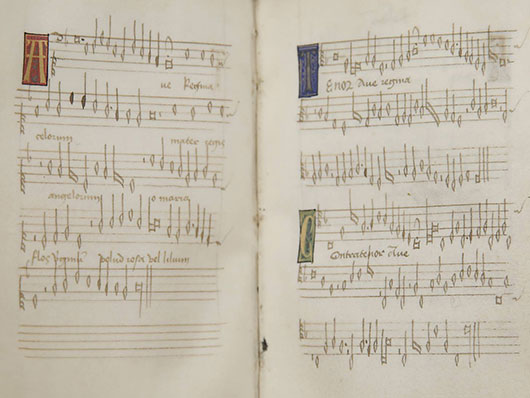 The Alamire Foundation, which owns the Leuven Chansonnier, has made images of the entire songbook available online.

Tickets for the three Northeast Ohio performances can be reserved online.

END_OF_DOCUMENT_TOKEN_TO_BE_REPLACED

The strings-only work by Berg has made relatively frequent appearances on the Orchestra’s programs. In 2021, the musicians recorded it for the In Focus series, and it appeared again on last year’s European tour. Friday’s rendition maintained the group’s characteristic light and effortless playing, each section blending as much as possible to echo the work’s original form as a string quartet. At fifteen minutes total, the piece is quite short, but the dense encoded musical meanings require some extra-attentive listening. Splitting up the three movements ensured that each one could be appreciated on its own. END_OF_DOCUMENT_TOKEN_TO_BE_REPLACED