The evening was largely built around the excellent baritone Jonathon Adams, who is of Cree-Métis descent, and who has explored that background more and more in recent years, both personally and in early music practice. Courtesy of the Canadian viol ensemble Les Voix Humaines, Adams joined gambist Susie Napper in the first performance of the program: a suite from the Métis Songbook combining J’ai fait une maitresse and Chant Cri.

It was a beautiful introduction to Adams’ sweetly mellow voice and fluency in all the distinctive little twists and turns of the expressive ornamentation. Napper easily shifted among several roles — drone, countermelodist, and string-crossing wizard — before Adams tied off the suite with a lovely Picardy third.

Moving into music that arrived in New France from Europe, the duo of harpsichordist Eric Milnes and gambist Mélisande Corriveau showcased their strong musical bond in an expressive account of Marais’ Prelude in D. Corriveau handled the über-quick, sighing scales with such ease as to make you forget all about the word “technique” — this was simply human communication, with Milnes as her supremely sensitive partner in conversation. 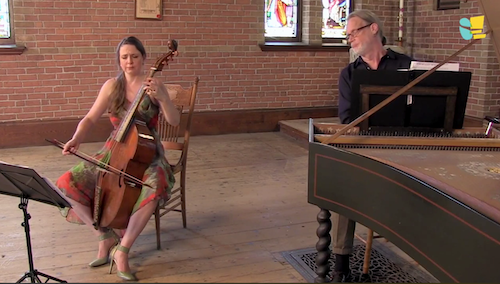 Purcell’s Strike The Viol, another recent recording from Les Voix Humaines, showed Adams’ compelling commitment to the nuances of every phrase, and impressive support from the group of viols (Napper, Corriveau, and Felix Deak) and harpsichord (Milnes).

Closing the program were two remote, split-screen performances of J.S. Bach, whose music, as the baritone noted, has been an important part of Adams’ vocal development and career. The Sinfonia from BWV 76 once again brought together Corriveau and Milnes, this time as the underpinning for Nagy’s clear-toned and beautiful oboe d’amore. Adams joined them in an engaging performance of “Ich lasse dich nicht” from BWV 197a, with Milnes moving to the organ. 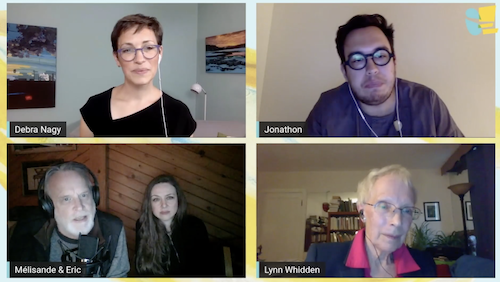 Breaking up the performances, and actually occupying a greater percentage of the evening, were Zoom-style conversations among Nagy, Adams (from Montreal), Corriveau and Milnes (Granby, Québec), and ethnomusicologist Lynn Whidden (Brandon, Manitoba), whose life’s work has been preserving Métis songs.

That panel did justice to a host of fascinating and important topics: Adams’ exploration of his roots, the wide-ranging Métis songs (with texts covering multiple languages, including some words that cannot be translated), cultural exchange, and cultural genocide.

The challenge for SalonEra going forward: tightening up the discussions to make them land more powerfully, and to achieve a more even balance between music and conversation. All, of course, without shortchanging the impressive level of substance or the comfortable, casual atmosphere of this innovative, informative series.

“Recovering Roots” and the live post-concert Q&A are still available to stream through midnight tonight, September 22.

END_OF_DOCUMENT_TOKEN_TO_BE_REPLACED

Tower dedicated this surprisingly brief work to “women who take risks and are adventurous.” Adventurous to be sure. While the opening theme is a subtle echo of Copland’s, the CSO brass was remarkably bright, crisp and crackling in its relentless morphing of the motif into quick, layered variations, both delicate and discordant, robustly spiced with startling bursts of timpani. END_OF_DOCUMENT_TOKEN_TO_BE_REPLACED