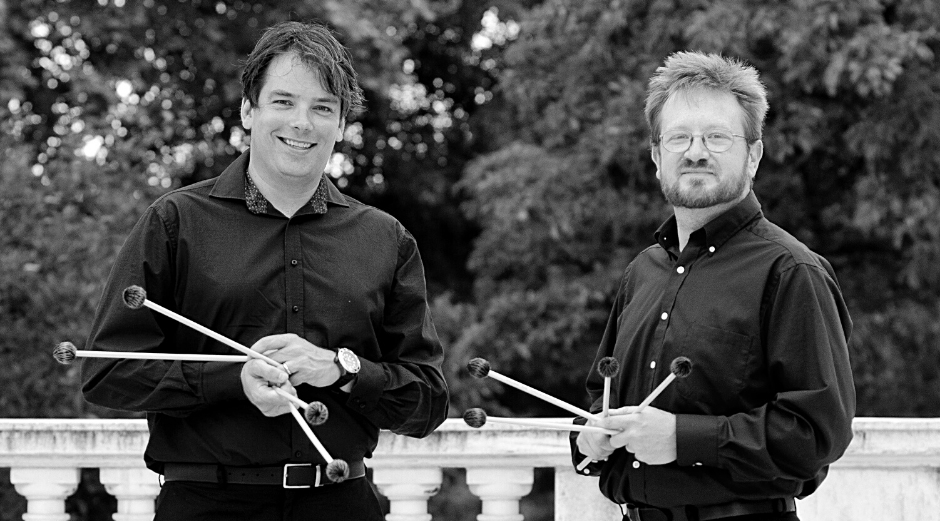 Although Duo Anime, the percussion duo of Mell Csicsila and Andrew Pongracz, have performed together for years, the demise of in-person concerts due to the pandemic has kept them apart for nearly twelve months. That will change on Thursday, January 14, when Local 4 Music Fund streams a live performance by these masters of mallets. I caught up with them for a Zoom conversation last Monday to find out more.

Duo Anime was birthed at Cleveland State University in 1992-1993 when Csicsila was in his second-to-last semester as an undergrad and Pongracz was just starting graduate school.

“It was really kind of forced on us,” Csicsila said. “There was a percussion ensemble program that was a little light on content, and our teacher Don Miller said, ‘I need ten more minutes. Learn these pieces.’ As a matter of fact, we’re playing those arrangements on this program.”

Except for an “impromptu video” of three Christmas songs the Duo posted in December (photo below), Csicsila said the last time he and Pongracz were in the same room was a year ago January or February. 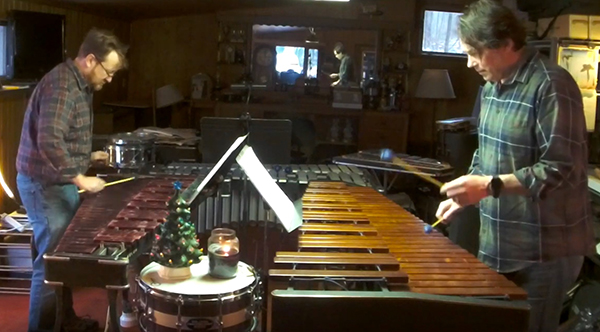 How long does it take for the two to get back in the groove for a program like they’ll play this week? “We’re going to find out on Thursday,” Csicsila quipped.

“It’s been almost three months since I’ve played outside my house,” Pongracz said. “The good news is that Mell and I have had lots of individual time to practice. We don’t have many distractions, so we’re pretty flexible.”

Unlike other broadcasts in the Local 4 Music Fund series, Thursday’s concert will originate at Survival Kit rather than the Steinway Piano Gallery. “We don’t need a piano, and it has the space, the lighting, and the technical equipment we need,” Csicsila said. The 78th St. venue also boasts a loading dock, which makes him happy. “Local 4’s Amber Rogers had several possible locations for us, and this one doesn’t have giant stone stairs. It’s a little bit of a drag when you have to hire Sherpas to get your equipment over the mountain range.”

Percussionists are famous for the complexity of their load-ins. What will the Duo be bringing to the performance on Thursday? “Two marimbas, a xylophone, and assorted small drums, bongos, and cowbells,” Pongracz said, adding that “Mell also has a very special thing that might be moderately dangerous.” Csicsila shot me an Instagram photo of that special device, noting that a bass player logged a humorous tuning question in the comments. 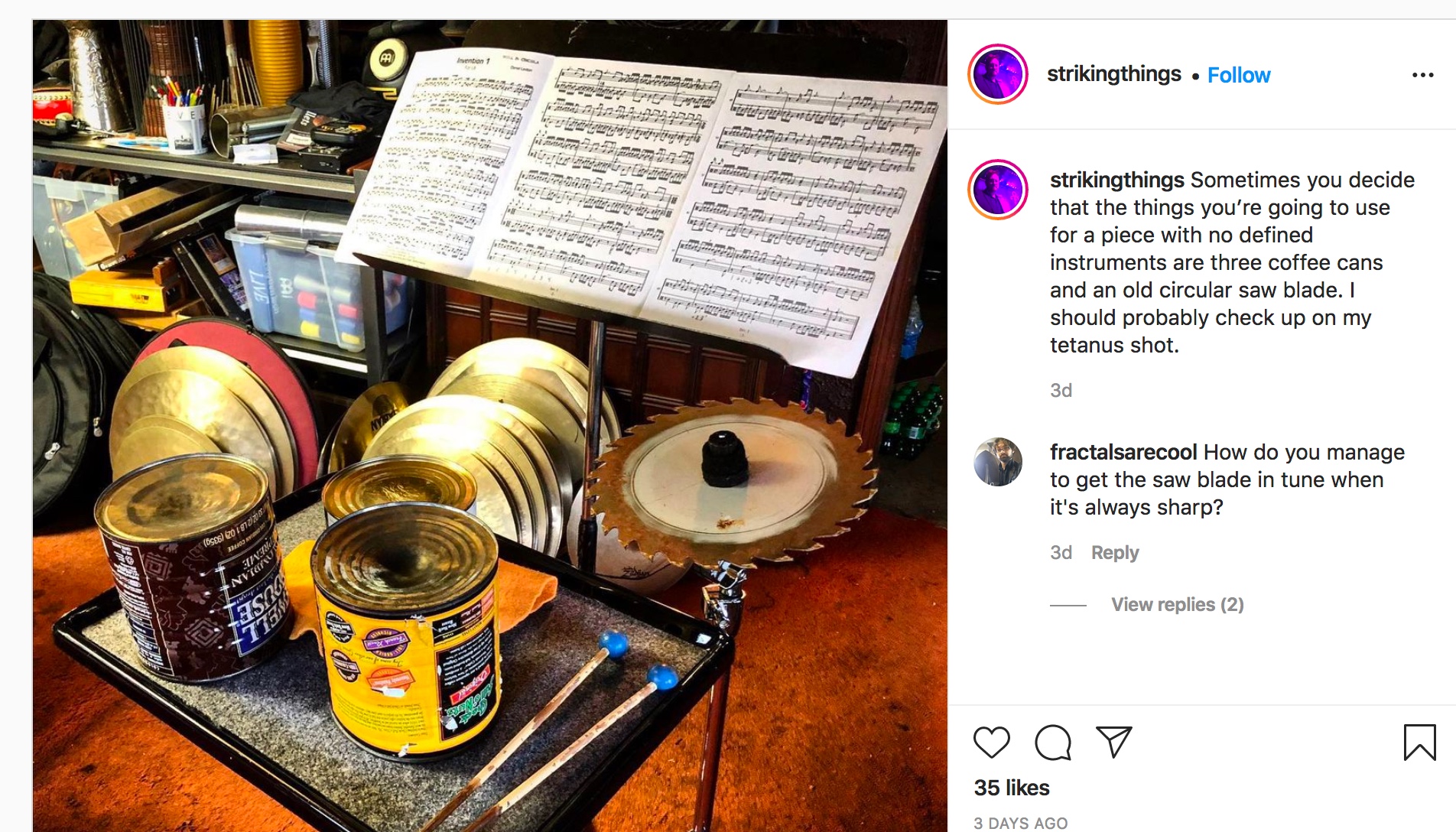 Asked about the Duo’s repertoire for Thursday, Pongracz said, “Almost everything we’re doing was either written or published in the 1980s, which was a good decade for us — we were both teenagers.”

The original compositions include Dance Etude No. 1 by Daniel Dorff, who is vice president of publications at Theodore Presser & Co. “He’s written a lot of music, especially for woodwinds,” Csicsila said. “It’s minimalist in kind of a Philip Glass way and has a pseudo-Balkan feeling to it that appeals to us — we’ve both played with [Cleveland-based Balkan band] Harmonia.

“I first got to know Dorff back in the ‘90s — when we had screechy dial-up Internet — as a composer who was shilling his Concerto for Percussion and Orchestra,” Csicsila said. “I got a study score from him and several arrangements of one of the movements. Then we found out about his percussion duos, and we’re always interested in works that other duos don’t necessarily play. Everybody likes world premieres, but I think that second, third, and fourth performances are even more important for composers.”

One Tōru Takemitsu piece on the program lasts only about 90 seconds. “It’s like a two-part invention, but includes the composer’s idea of extending Debussy’s harmony,” Csicsila noted.

The third original work is Wayne Siegel’s 42nd St. Rondo. “He was born in the US, went to college in California, then moved to Denmark to study with Per Nørgård,” Csicsila said. “The piece was inspired by busking street drummers in Times Square at the corner of 42nd Street and Broadway.”

Pongracz noted that the program will also include works by J.S. Bach and Kabalevsky arranged by Don Miller, plus a James Moore arrangement written for an encore at Ohio State. “And Earl Hatch’s arrangement of a Granados piece for two marimbas might just be my favorite piece on the program.”

The Local 4 Music Fund, which sponsors these streamed concerts, welcomes donations for local musicians whose gigs have evaporated during the pandemic. Even now with vaccines becoming approved and available, the light at the end of the tunnel for performers is only shining dimly.

Csicsila said, “I allegedly have a gig with a Vegas artist at the end of March, but that’s already been rescheduled three times.”

Pongracz said, “There’s nothing in my book. I don’t even have a book this year. I have one student this semester, and that’s it. Hopefully things will come around in the spring and summer. Being a house husband and a dad is my full-time job. I still practice, and my wife Brenda and I started a duo. We’re outside a lot, and we watch a lot of movies.”

Has there been any upside to the downtime this year? Mell Csicsila thinks it’s too early to say. “Life only makes sense in the rearview mirror.”

Andrew Pongracz thinks that’s a matter of perspective. When we talked, his two sons were enjoying their second day back at school, which is being conducted in hybrid fashion. “They’ve been home since March, and they’ve hated doing classes online. We try to focus on what we can do rather than what we can’t.”

Jackson began the program with a recitation of Langston Hughes’ poem “Helen Keller” — the first of five poems by Hughes that served as interludes between each piece on the first half. END_OF_DOCUMENT_TOKEN_TO_BE_REPLACED

Pianos with pins and tape on strings, a bass drum and tam tam, crotales, Almglocken, and vibes. Microphones were hooked up all around the instruments. The feed was sent to speakers around the room. Lighting designer Nicholas Houfek hung incandescent globes over the arrangement of instruments from thin black wires stretching across the beams. END_OF_DOCUMENT_TOKEN_TO_BE_REPLACED

From the podium, Elim Chan set an ambitious tone for the evening. The rising star conductor, here in her Cleveland Orchestra debut, has a commanding style, and every twist and turn in Saturday’s performance tracked closely with her baton. END_OF_DOCUMENT_TOKEN_TO_BE_REPLACED