First up was North, whose five-minute introduction touched on all his pieces as well as the lute’s 250-year history. After an improvised prelude, he began with Ennemond Gaultier’s gentle Tombeau de Mezangeau before drifting seamlessly into Gaultier’s Canaries, drawing out a rich sound from his eleven-course lute. These pieces and the others to follow were complemented by his relaxed playing style, which allowed his fingers to practically float up and down the strings.

North’s tone was warm and inviting, drawing the listener’s attention to the smooth lines of his phrasing. Two microphones, placed on either side of him, were well adjusted to pick up the sensitive player’s every nuance. While his pieces all erred on the slow side, including Esais Reusner’s Paduana, the more energetic middle section of Reusner’s Suite in a displayed his dexterity on the instrument.

North’s selections also favored the minor side, and in some cases shared the same key — Sylvius Leopold Weiss’ Fantasia and Heinrich Franz von Biber’s Passacaglia, the pair which closed out his program, were both in C minor. Though the Biber was an arrangement of a work for violin and continuo, both pieces felt like a natural fit on the lute thanks to North’s skillfully executed chordal passages and arpeggios. 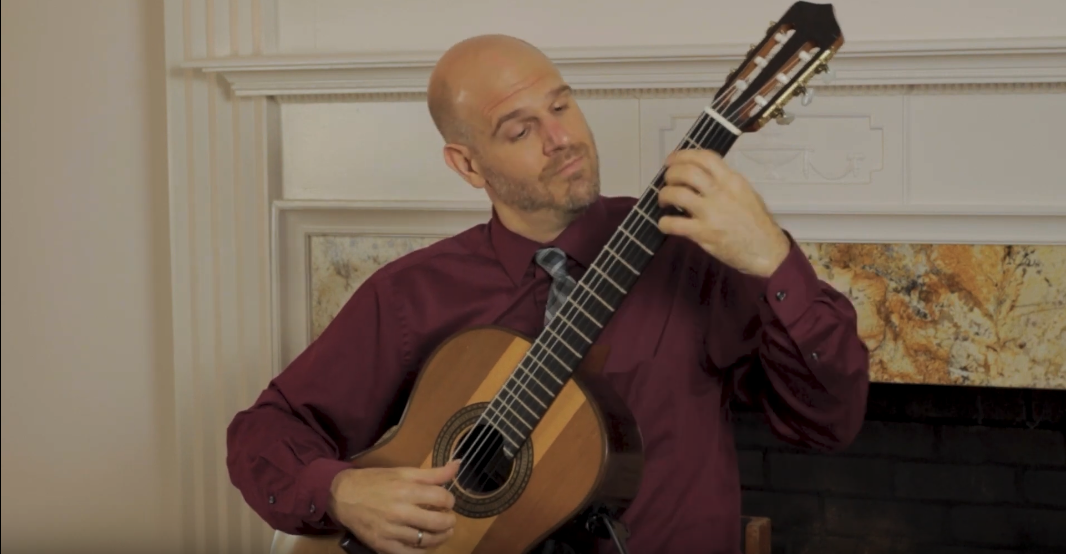 After a built-in intermission, Gruca wasted no time, forgoing an introduction to launch right into the music. An immediate contrast to North, the opening Andaluza by Regino Sainz de la Maza blended quick fingerwork with punchy chords for a vibrant and powerful first impression.

Gruca set a fast pace, swiftly moving between a variety of shorter pieces without commentary. He only addressed the camera at the very end, in a tutorial for playing scales more musically which included technical terms that may have left non-guitarists somewhat confused. Nonetheless, his playing spoke for itself, and de la Maza’s Serenata Española further showcased his energy and expressiveness.

In four selections by Agustín Barrios Mangoré, Gruca’s rich, clear tone let every note ring. Though he got a little tense in the faster sections of Vals, Op. 8, No. 4 and Danza Paraguaya — two very playful pieces — Julia Florida (Barcarola) and Vals, Op. 8, No. 3 allowed him to lean into his emotional side with wide vibrato, focusing on the moments of tension and release.

Gruca’s program shifted into the modern day with two selections from Roland Dyens, the virtuoso French guitarist who passed away in 2016. In Songe Capricorne, he emphasized moments of silence in a thoughtful way, building tension with contrasts in pitch and dynamics. True to its name, “Fuoco” (from Libra Sonatine) was quick and fiery, and the guitarist remained undaunted through crunchy chords and complex rhythms. Slapping the body of his instrument for a percussive effect, Gruca brought the program to an exciting close.

END_OF_DOCUMENT_TOKEN_TO_BE_REPLACED

Supported by engagingly, yet simple staging by Cara Consilvio, a well-prepared cast of singers told the archetypal story of Cinderella with charm and flair. Framing the production was  a sparse but colorful set and wonderful lighting by Dave Brooks. END_OF_DOCUMENT_TOKEN_TO_BE_REPLACED