On Sunday, November 13 at 3:00 pm at a private residence in Cleveland Heights, Kashkashian will be part of a benefit concert for the Cleveland Kosher Food Bank. The event, titled “Sharing the Bounty,” is sponsored by the Cleveland Chapter of Music for Food, which was founded in 2015 by noted cellist Sharon Robinson. The concert will feature Kashkashian, Robinson, violinist Jaime Laredo, violist Yu Jin, and the Cavani Quartet in performances of works by Bartók, Schulhoff, and Brahms. Seating is limited and the deadline for reservations is Sunday, October 30. Click here for further information.

Since its founding in 2010, Music for Food has created over 350,000 meals through donations made at concerts in Boston, California, Illinois, New York, New Jersey, Washington, D.C., Ohio, Pennsylvania, and Wisconsin on behalf of more than a dozen hunger-relief organizations. “It’s expanded beyond what we had ever imagined,” Kashkashian said. “We’re very pleased that so many musicians are inspired by the idea and choose to become involved.”

What inspired Kashkashian to take on the cause of food insecurity? “I was at a dinner with some of my New England Conservatory colleagues. We were discussing how the young people at NEC were lacking a vehicle for using their talents to be good citizens in their own community — something that would add a second layer of value to what these young musicians are doing every day.” 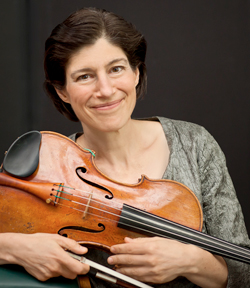 Kashkashian noted that the idea of turning music into food is a powerful metaphor, and a connection can be made between nourishing the heart, the soul, and the body. “The two main pillars that one needs in order to develop and grow are shelter and nourishment. Without these two things all efforts at education and medical assistance are limited.”

The Grammy-winning violist is very pleased with the relationship that has developed between Music for Food and the New England Conservatory. “NEC has been extremely open and supportive of what we do. We run a special program through our chamber music department where the students can sign up to do their performance requirements at a food pantry instead of at the school. This way any NEC student that wishes to be involved can be. I don’t think this type of thing is happening in other cities yet, but it certainly could.”

Through its Fellowship program, Music for Food teaches middle and high school musicians how to address the fight against hunger in their communities “Very often middle school string players can feel isolated in their school environment because not many students are doing what they do.” Music for Food works with schools in organizing assemblies with the Fellows which include a chamber music performance. “Being a good chamber musician and being a good member of your community are the same thing,” Kashkashian said. “It’s important for them to feel that classical music has an overriding social value.

“The Fellows also speak about hunger and the fact that it is silent, and mostly hidden in our midst. If we had every seventh person stand up, that would be the national average of how many people go hungry every night. The problem exists even in privileged or what look like privileged communities.”

Kashkashian spoke about the “Energy Triangle” that Music For Food creates among the musicians, audience, and food pantries. “We want the audiences to feel like active participants when they’re at one of our concerts. They are receiving music and actively giving in return. Everybody is giving to everybody. That’s what we love about this model.”

END_OF_DOCUMENT_TOKEN_TO_BE_REPLACED

Rodgers & Hammerstein’s Cinderella was originally produced for television in 1957 — seven years after the animated Disney film was released — and starred Julie Andrews. According to the Rodgers & Hammerstein website, it was viewed by over 100 million people. END_OF_DOCUMENT_TOKEN_TO_BE_REPLACED

The story line has its origin in an 1855 play and an 1842 farce that Thornton Wilder mined for his 1938 play The Merchant of Yonkers. When that turned out to be a flop, in 1954 Wilder made the crucial decision to re-center the show around the character of the legendary marriage broker Dolly Gallagher Levi and renamed it The Matchmaker. END_OF_DOCUMENT_TOKEN_TO_BE_REPLACED

The Dodero Center for the Performing Arts at the Gilmore Academy in Gates Mills is one feature of an impressive campus. The auditorium is shallow, the stage is deep, and the ensemble played without a shell. Throughout the program, the sound, especially in instruments’ lower registers, tended to disappear. END_OF_DOCUMENT_TOKEN_TO_BE_REPLACED