The first third of the hour-long program, presented by Music From The Western Reserve, was chat. A conversation on Zoom led by artistic director and general manager Zsolt Bognár helped us get to know the members of this Kent State University faculty ensemble: flutist Diane McCloskey Rechner, oboist Danna Sundet, clarinetist Amitai Vardi, bassoonist Mark DeMio, and hornist Kent Larmee.

Next they launched into a series of mostly short pieces, many of them arrangements, recorded at Ludwig Recital Hall and Trinity Cathedral. The biggest takeaway throughout was the Black Squirrels’ remarkable blend. A keen balance allowed the kaleidoscopic colors of this combination to come to the fore at all times, and on the interpretive side, a strong sense of musical shape kept you pulled in.

Opening works by Adrien Barthe, Lully, and Beethoven, as well as two traditional Welsh songs, were all attractive and well-performed, but the middle of the program shined brightest. In a clever arrangement by Anthony Iannaccone, coupled with a masterful performance and of course a winning piece itself, Scott Joplin’s Easy Winners was spunky, jovial, and radiant, with plenty of exciting dynamic contrast to boot. After that, Johann Georg Lickl’s Menuetto brought out technical fireworks from the upper winds.

But perhaps the greatest showcase of this instrumentation was August Klughardt’s “Andante Grazioso,” the third movement from his Op. 79 Wind Quintet. To keep things extra fresh and varied, Klughardt gradually introduces us to various combinations within the quintet, beginning with beautiful duets from the double reeds and flute/clarinet, then featuring a soaring horn, and continuing from there to vary the direction of the spotlight and the number of players. 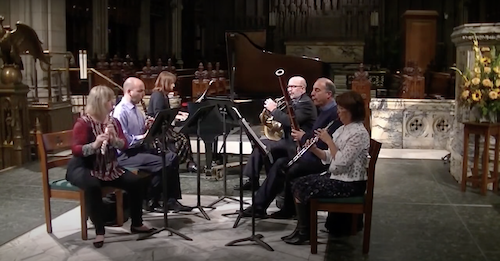 Selections from Ludwig Thuille’s Sextet brought in the brilliance of pianist Elizabeth DeMio as well as a nice change of programmatic pace in these longer movements. But with the change of venue came a change in recording quality, which lost its clarity in this larger space — an unfortunate fit especially for the dense soundscape of this piece. Blocking that out, you could still appreciate the ensemble’s changes of character, their clean coordination, and one particularly bit of juicy rubato from the pianist.

Jackson began the program with a recitation of Langston Hughes’ poem “Helen Keller” — the first of five poems by Hughes that served as interludes between each piece on the first half. END_OF_DOCUMENT_TOKEN_TO_BE_REPLACED

Pianos with pins and tape on strings, a bass drum and tam tam, crotales, Almglocken, and vibes. Microphones were hooked up all around the instruments. The feed was sent to speakers around the room. Lighting designer Nicholas Houfek hung incandescent globes over the arrangement of instruments from thin black wires stretching across the beams. END_OF_DOCUMENT_TOKEN_TO_BE_REPLACED

From the podium, Elim Chan set an ambitious tone for the evening. The rising star conductor, here in her Cleveland Orchestra debut, has a commanding style, and every twist and turn in Saturday’s performance tracked closely with her baton. END_OF_DOCUMENT_TOKEN_TO_BE_REPLACED