END_OF_DOCUMENT_TOKEN_TO_BE_REPLACED

Although black squirrels can be spotted around Northeast Ohio, they are prolific in the city of Kent. “At our first rehearsal we talked about choosing a name for the group, so we threw out some ideas,” bassoonist Mark DeMio recalled during a recent telephone conversation. “Our horn player said that since there were so many black squirrels in the area he always liked the idea of playing in a group called the black squirrel — something. And that’s how we became the Black Squirrel Winds.”

On Sunday, April 11 at 5:00 pm, Music From The Western Reserve will present the ensemble that bears the name of Kent State University’s unofficial mascot. The pre-recorded online program is free. Click here at start time.

In addition to performing on the University’s main and satellite campus, as faculty the Black Squirrels spend a good deal of their time coaching students. DeMio said that although they enjoy playing challenging pieces such as the quintets of John Harbison, Jennifer Higdon, and Jean Francaix, “we’re always looking for repertoire that we want to play and is good for teaching to younger players. And most of the music that is on this concert has that element to it.”

END_OF_DOCUMENT_TOKEN_TO_BE_REPLACED 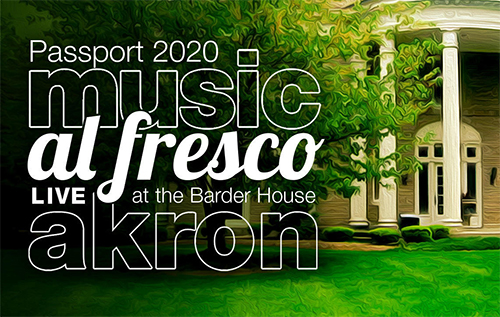 Apollo’s Fire sold out all seven of its outdoor “Tuscan Sun” concerts last week, and now patrons of Akron’s Tuesday Musical “Music al fresco: Passport 2020” have snapped up all the available seats — socially distanced, of course — for its three Sunday afternoon performances in September and October at historic Barder House in West Akron.

That’s a nice problem to have, and TMA has solved it by adding an extra 1:00 pm performance to the existing 3:00 pm performances on September 6 (Russian Duo), September 20 (Black Squirrel Winds), and October 11 (Found Sounds: Ghana, Trinidad, Brazil).

Executive Director Cynthia Snider wrote in a press release, “We have carefully designed Music al fresco: Passport 2020 to provide a safe entertainment option for audiences in Northeast Ohio where most live arts events have been canceled for months because of COVID-19.”

Snider added that strict safety protocols will be in force in coordination with Summit County Public Health. END_OF_DOCUMENT_TOKEN_TO_BE_REPLACED

END_OF_DOCUMENT_TOKEN_TO_BE_REPLACED

For its latest In Focus episode, “Visions and Impressions,” The Cleveland Orchestra makes a gesture in the direction of welcoming winds back into the action, although principal flute Joshua Smith’s contribution to the event comes in the form of two unaccompanied pieces that leave him looking very lonely on the Severance Hall stage. END_OF_DOCUMENT_TOKEN_TO_BE_REPLACED

LD’s artistic director Debra Nagy introduces the hour-long program with a discourse on the importance of the garden and its centerpiece, the fountain, for artists and musicians of the 14th century. Later in the program, Blue Heron artistic director Scott Metcalfe expands on the subject by exploring the Trinitarian metaphor behind that bubbling source of water in the Medieval mind. END_OF_DOCUMENT_TOKEN_TO_BE_REPLACED

END_OF_DOCUMENT_TOKEN_TO_BE_REPLACED

The latest program, which visits the ghetto and palace at Mantua and the ghetto and church at Venice, uses expressive instrumental music by Salamone Rossi, Giuseppe Sammartini, Antonio Vivaldi, and Alessandro Marcello, two of Benedetto Marcello’s 50 psalm settings, and Hebrew prayers and songs associated with Passover and Purim to evoke the rich cultural life of those towns. END_OF_DOCUMENT_TOKEN_TO_BE_REPLACED