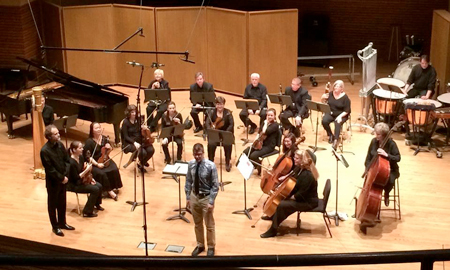 Coordinated by composer and BW faculty member Clint Needham, the Young and Emerging program has been part of CCS’s mission since its founding in 1980. In an interview with this publication, Smith told Jeremy Reynolds, “It’s rare for young composers to have the opportunity for a professional orchestra to perform their works. The seven pieces are all very different in their ideas about sound — some are more traditional, while others are more experimental.”

Wednesday’s concert will include:

This past Sunday I attended the open rehearsal, the first time the orchestra read each piece. Smith gave each composer equal time to listen, make comments, answer questions, and fix whatever problems arose. During the session, I spoke to four of the composers, who all agreed that they learned a lot from the experience. They noted that their music always sounds completely different when heard live. They also agreed that they need to be better communicators with the conductor and players, both through the score and by answering questions quickly and precisely.

Andrew Keller, a PhD candidate at Kent State, said, “I realized the score was not as clear as I thought it was, and there were some problems in the parts. Every twenty seconds you spend fixing those problems is twenty seconds of wasted rehearsal time.” Cleveland Institute of Music senior Gabriel Novak felt similarly about the need to be clear in the score. “But I was happy because I’m getting better at writing what I hear, and hearing what I write.”

Justin Weiss, a senior at Oberlin, said that he used the opportunity to try out new ideas, especially with the creation of colors. “It was interesting to hear what worked and what didn’t. But these players are so good, they figured everything out very quickly.”

“I haven’t been in this type of situation a lot,” University of Akron senior Alex Morris said, “and this was an eye-opening experience. I learned so much, especially about writing for strings.”

From a performer’s point of view, bassoonist Renee Dee said that she was impressed with the freshness of musical ideas. “In a lot of the writing, there is a sense of moving forward while paying attention to our musical heritage, and I really enjoy that.” 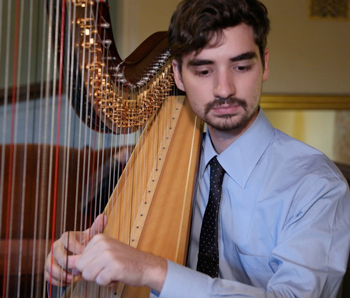 On Thursday, March 23, the always creative duo Patchwork (Noa Even, saxophones, and Stephen Klunk, drum set) will share a concert with harpist Stephan Haluska beginning at 8:00 pm at the Bop Stop.

Haluska is known for creating abstract compositions that explore the harp’s idiomatic textural, harmonic, and percussive qualities. The harp has developed a mystical identity in Western culture and is often associated with the sound of angels in heaven, magic, and dream sequences. But Haluska’s music challenges those stereotypes in an attempt to (de)mystify the harp.

Patchwork’s program will feature a variety of commissioned works. In their program description, the ensemble writes:

Charlie Wilmoth’s Fractured Laundry feels mechanical, but if it’s a machine, it’s one that cannot be easily controlled.

Huijuan Ling’s Shadow Phase creates a musical narrative inspired by a visit to Devil’s Canyon in Utah and reflects the processes that carved the canyon into the surrounding landscape.

Breathe, by Evan Williams, concentrates on quiet yet rhythmically active gestures to explore the complexity of human breath, at times quiet and relaxed, and at other times loud and labored.

Eric Wubbels’ Axamer Folio is a modular network of 25 pieces that range in performative and notational contexts from rigorously specified to indeterminate, graphic, and text scores; from tightly synchronized duo music to phasing loops, list structures, and free improvisation.

The festival will feature a performance by No Exit on Friday, March 24 at 8:00 pm at Heights Arts. “It will be a great concert. These are some of our favorite pieces in our repertoire, and it’s nice to be able to perform them again,” artistic director Timothy Beyer said during a recent conversation.

The program will include Ryan Gallagher’s Night Falls Fast for viola and percussion. “Ryan grew up in Cleveland, and one of his first pieces was part of CCS’s Young and Emerging Composers concerts, which is where I first met him,” Beyer said. “I’ve always been impressed with his music.”

Another composer Beyer first met through the Young and Emerging program is Matthew Ivic. “His Piano Quartet No. 1 is one of two pieces we’ve commissioned from him, and we’ve always loved it. We first performed it during our second season, and it’s nice to be able to bring it back.”

Columbus-based saxophonist and composer Michael Rene Torres’s Voices of Contempt for solo bass clarinet will receive its world premiere at the concert. “We were introduced to his music through our clarinetist, Gunnar Owen Hirthe, and we hope to play more of his music in the future.”

The evening will also feature Bohuslav Martinů’s Duo No. 2 for Violin and Cello and Donald Erb’s Music for Mother Bear. “I never had the opportunity to really get to know Donald Erb,” Beyer said. “Obviously, he loomed larger than life in the Cleveland new music scene. He was an inventive and original composer, and it’s great to include this piece on the program.”

NEOSonicFest will conclude with a concert by the Cleveland Chamber Symphony on Sunday, March 26 at 4:00 pm in Harkness Chapel. Steven Smith will lead the ensemble in a 50th-anniversary performance of Donald Erb’s Reconnaissance, a work which pioneered the use of synthesizers in live performance, along with Erb’s Music for Mother Bear.

Smith said that Reconnaissance, dedicated to Robert Moog of Moog synthesizers, may be the first piece that combined electronic instruments with live performance and acoustic instruments. “What that spawned was a landmark for composers. Imagine what pop music would be like without the invention of the synthesizer.” Smith went on to say that Erb and Moog created an electronic instrument specifically for Reconnaissance that still exists in a cannibalized state as the nucleus of the electronic music studio at the CIM. The Chamber Symphony will perform two versions of the work: the original and one that includes an additional movement composed later for a recording.

END_OF_DOCUMENT_TOKEN_TO_BE_REPLACED

Supported by engagingly, yet simple staging by Cara Consilvio, a well-prepared cast of singers told the archetypal story of Cinderella with charm and flair. Framing the production was  a sparse but colorful set and wonderful lighting by Dave Brooks. END_OF_DOCUMENT_TOKEN_TO_BE_REPLACED